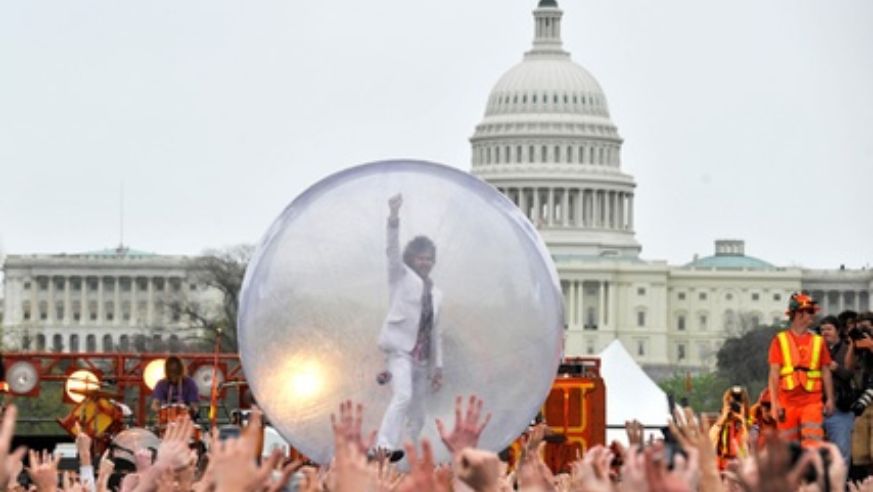 If there's an ideal time to visit our nation's capital, the month of April would be it. D.C. has always welcomed families with budget-friendly attractions (walking through the National Zoo, touring the free Smithsonian museums), and now it welcomes the start of spring with its annual National Cherry Blossom Festival (March 27-April 11, 2010) and the 40th Earth Day.

The Earth Day Network—headquartered in D.C. with more partners in 190 countries—has grown into its own this year by taking a hard-hitting stand for a 2010 climate bill in the hopes of creating more American jobs and capping carbon emissions. The capstone event will be held on Sunday, April 25th, when a major Climate Rally at the National Mall will feature international entertainers, speakers, exhibits, and eco-villages.

In conjunction with the week-long celebration, the organization hopes to gather a billion pledges from participants willing to modify their bad habits for the better, from replacing energy sucking light bulbs with a more efficient model to joining in a community project throughout April.

It's fitting then that the fragile pink blooms of the city's cherry trees—a good-will gift from Japan in 1912—are a prelude to the celebration of a network devoted to preserving nature. The following events don't cost a thing except for your support, and that just feels right.

Sponsored by the World Wildlife Fund, the majority of the world will be going dark for an hour starting at 8:30 p.m. their local time in a symbolic demonstration against climate change. Last year, landmarks joined in, like the Empire State Building, Las Vegas Strip, Golden Gate Bridge, Great Pyramids of Giza, Eiffel Tower, and Sydney's Opera House. Register as a member online to support your home state.

The fifth annual Prelude to the Fireworks is a three-hour family festival of live musical performances, kids craft activities, and cuisine from local restaurants. Leading up to a fireworks show, the starry-skied display starts at 8:30 p.m. and can be viewed from the festival area (Southwest Waterfront, 877/442-5666, free) or aboard the Spirit of Washington dinner cruise (866/302-2469, from $91).

The highlight of this event is the lighting of a 359-year-old stone Japanese lantern, with a formal ceremony including traditional performers, Washington dignitaries, and Cherry Blossom Princesses. (Tidal Basin at Independence Ave. and 17th St. SW, free.)

This Japanese street festival takes over right where the Cherry Blossom parade leaves off, with the largest one-day exhibition of Japanese culture in the U.S. Demonstrations of taiko drums, samurai swordsmen, karate, and the art of bonsai are only a few of the more than 30 hours of live performances on five stages. Make sure to arrive hungry to sample the Japanese fare and potent sake at the Matsuri Markets, and check out the traditional products for sale at the Ginza Marketplace. The younger members of the family will appreciate the 1,600-square-foot Children's Corner, where they can try their hand at origami, learn a few Japanese words, and listen to traditional storytelling (12th St. and Pennsylvania Ave. NW, free). Visit the Japan National Tourist Organization tent for the chance to win a trip for two to Japan (West side of 12th St. and Pennsylvania Ave.).

Although there will be earth-friendly activities happening all weekend on the National Mall, this last event for Earth Day 2010 will be considered the big hoorah. A massive rally will gather to support a new climate bill demanding clean energy legislation this year, with celebrity speakers and performers participating. And if the very first Earth Day in 1970 is any indication—with 20 million global supporters—this anniversary rally may recreate history. (National Mall grounds, between Independence and Constitution Aves., from the Capitol to the Lincoln Memorial.)