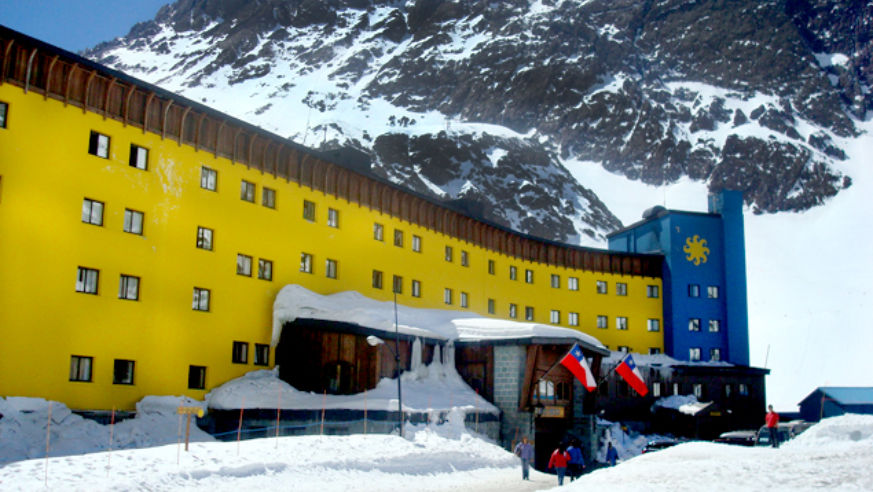 An old-world resort where you can beat the crowds, and the heat.

A summer ski trip is more than a novelty. It's a self-indulgent subversion of the natural order. It's dessert before dinner, a Bloody Mary at breakfast, a weekend on Wednesday. It feels impossible, yet there it is. It's something every skier should try at least once.

Europe's Alpine glaciers offer year-round skiing, though that's mostly a lark—a few sunny turns in the morning high above Zermatt, maybe a run or two in shorts so your spouse can take a funny picture, then back down to the usual sightseeing. No, Europe won't do. For the full experience, you need to head to South America. And for one of the ski world's few truly unique experiences, you need to visit the Ski Portillo resort in Los Andes, Chile.

Los Andes is deep in the southern hemisphere, roughly in line with Cape Town and Sydney, so winter runs from June through September. There's something undeniably decadent about plumbing the depths of fresh powder while folks back home sweat through another dog day afternoon. But the Portillo resort bends time in other ways, too. With its surreally scenic—and, at more than 9,000 feet, notably lofty—perch amid the jagged Andes Mountains, it feels like the sort of place where you might stumble across a lost civilization. And, in many respects, that's exactly what Portillo is.

The outrageous LEGO-yellow Hotel Portillo serves as the resort's main lodging and self-contained center of gravity. It's a delightful throwback, an uncontrived retro relic, where, if you squint, you can make out the specter of a jet-set past—just beyond that framed print of dogs playing poker. From the formal dining room, where uniformed waiters serve guests three meals daily (plus high tea in the afternoon) at assigned tables, to the dark wood, soaring ceilings, and stocking-foot ethos of the common areas, there's an appealing aura of lived-in luxury here. In a ski world dominated by endless stone-and-timber lodges, uniformed drones dispensing training-manual hospitality, and interchangeable wood-fired pizzerias and mochaccino latterias, Portillo stands out for its absence of artifice. The service is abundant and genuinely friendly. The dining is fine without being fussy—Chilean wines and fresh local seafood figure prominently. And the experience is singular.

Portillo operates predominantly on the old-style ski-week model: Saturday to Saturday stays with meals and lift tickets included, yet another welcome anachronism in an age of à la carte, rush-in, rush-out recreation. Not only do package deals make Portillo surprisingly affordable, especially within the costly context of ski travel, but the weeklong stays also encourage friendships and foster a sense of shared experience among guests who see one another day after day, night after night, and, in many cases, year after year. North Americans, South Americans, Europeans; skiers and boarders young and old, nascent and world famous—everyone mixes over Pisco Sours (Chile's signature cocktail, which tastes a little like baby aspirin) and après-ski sushi in the hotel's bar or amid the late-night throb of the in-house disco (not club-disco). At its best, a week in Portillo can feel like a colossal slope-side house party. Grown-ups gab and kids run free (or partake in any number of organized activities—bread-baking class is a perennial favorite).

It's probably not surprising that none of the sleek and simply appointed guest rooms contains a television—yet another nod to a more genteel past—though a communal TV room and high-speed Internet access cater to those who can't quite cut the cord. Accommodations range from twin rooms to suites to practical family apartments consisting of adjoining rooms, one equipped with a double set of bunks. Adjacent to the hotel, the resort operates two smaller, less elaborate lodges: the Octagon, which offers four-person rooms outfitted with two sets of bunk beds; and the spartan Inca Lodge, a hostel-style setup aimed at younger travelers. Octagon guests take their meals in the grand dining room at the main hotel, while those at the Inca have access to a cafeteria. Beyond that, all of Portillo's offerings are open to everyone staying at the resort.

Of course, Portillo's overriding amenity is its skiing. The first folks to ski in the area were 19th-century railroad engineers, who found it easier to slide than ride as they worked to establish a link between Chile and Argentina. Today, the resort, purchased from the Chilean government by American investors in 1961 and still American-owned and -run, offers skiing suitable to all abilities on 35 trails from 12 lifts, as well as innumerable acres of off-piste terrain. Portillo's altitude results in wide-open, treeless ground blanketed by reliable annual snowfall.

If you see a lift line in Portillo, take a picture. Otherwise, nobody will believe you. The slopes are largely the domain of the resort's 450 guests, supplemented by a smattering of local day skiers and perhaps a few Chilean army mountain troops engaged in "training" that looks suspiciously like R&R. You may also encounter—on the slopes or horsing around on the sundeck—members of the various national ski teams who actually do train at Portillo, or perhaps a ski-film star preparing to jump cliffs for the cameras. You probably shouldn't attempt that yourself, though experts interested in exploring beyond the resort's defined boundaries may hire an experienced guide, and anyone looking to brush up on technique will find a top-notch multilingual ski school.

Portillo's underpopulated slopes have a lot to do with the resort's uncommonly relaxed atmosphere, which may require an adjustment for many American skiers, who are notorious for their harried and often competitive pursuit of maximum mountain plunder. Why rush in the morning? Why not take a break to bask in the sun? Why not spend an hour (or three) watching condors circle as you enjoy a lunch of grilled meats and chilled wine at on-mountain eatery Tio Bob's? Take a dip in the outdoor pool, soak in one of the pond-size hot tubs, grab a nap, get a massage, read a book. The snow isn't going anywhere, you're not going anywhere-and Portillo isn't changing anytime soon.

10 Most Precious Places on Earth