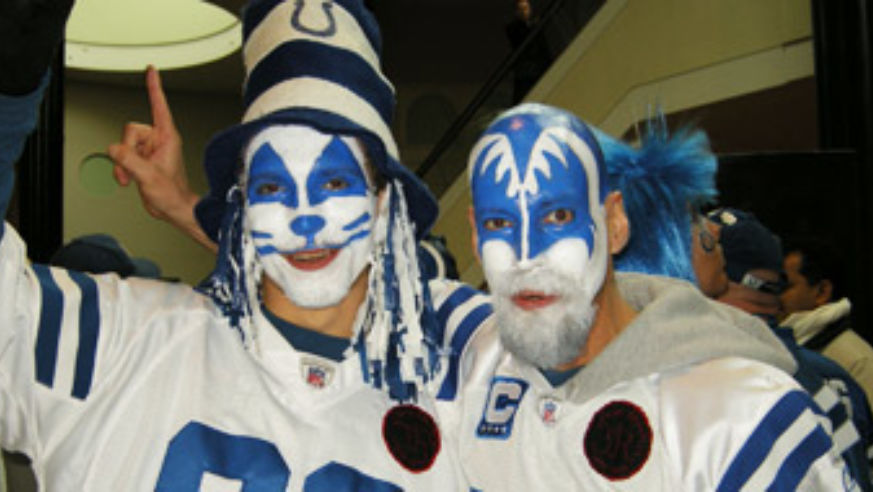 Want to travel to see the New Orleans Saints take on the Indianapolis Colts in Super Bowl XLIV on Sunday, but don't have thousands of dollars lying around to pay for the ticket and trip to Miami?

Don't worry: You don't have to settle for watching the big game from the couch. You can spend the weekend in an atmosphere just as exciting—and not nearly as expensive—as the one in south Florida, with a getaway to the homes of the two teams competing. Both New Orleans and Indianapolis are welcoming travelers with deals on food, lodging, and activities.

Best bets for both

Omni hotels in both cities are embracing the competitive spirit with the Go Indy, Go Big Easy package, featuring rooms starting at $144 (in honor of Super Bowl 44). Under the promotion, if the Colts win, the fans staying at Indianapolis's Omni Severin Hotel will get their room free Sunday night, compliments of the Omni Royal Orleans in New Orleans. And if the Saints win, the fans staying at the New Orleans Omni stay free Sunday night, courtesy of the Indy Omni.

(There's also a friendly wager between management at the two properties: If Indianapolis wins, the GM of the New Orleans hotel will have to parade around the French Quarter in Colts gear, cheering for his rival; if New Orleans wins, the GM of the Indy hotel will have to do likewise in Mardi Gras attire at the city's Soldiers and Sailors Monument downtown.)

The celebration will continue into the next week: If the Colts win, the Indianapolis Omni will send Indy-style Just Pop In popcorn (in Colts colors) for guests to enjoy at the New Orleans Omni; if the Saints win, the New Orleans hotel will send king cakes to guests at the Indy Omni.

Another wager pits the Indianapolis Museum of Art against the New Orleans Museum of Art: If the Colts win, NOMA will loan Claude Lorrain's 1644 painting, Ideal View of Tivoli, to IMA. If the Saints win, IMA will send J.M.W. Turner's work from 1800, The Fifth Plague of Egypt, to NOMA.

The Marriott New Orleans is offering the Finish Strong package starting at $179 a night, including accommodations, two Saints hats, and a game-day snack pack with a Saints cooler, four Abita beers, and a large bag of Zapp's Who Dat? chips (to book, use rate code SPE). During the game, the hotel's bar will have food and drink specials, as well as giveaways, prizes, or drawings for every touchdown New Orleans scores.

Saints' fans can watch Sunday's game in the French Quarter with a team legend at Deanie's Seafood, which is hosting a Flying Pigskin Party. Former Saints quarterback Bobby Hebert will be broadcasting his pre- and post-game radio shows live from the restaurant, where $125 gets you an all-you-can-eat prepared menu and an open bar throughout the game.

Visitors to New Orleans will also get a taste of Mardi Gras. It's the first weekend of the festival, and six parades are set for Saturday (parades previously set to roll during Sunday's game have been canceled or rescheduled). And regardless of the game's outcome, fans can cheer on Saints quarterback Drew Brees as the king in the krewe of Bacchus's parade on February 14. (See full Mardi Gras details at the New Orleans tourism Web page.)

Also while you're in town, check out the Audubon Nature Institute, which is giving fans wearing Saints gear half-price admission on Saturday and Sunday to its zoo, aquarium, and insectarium.

Here's a roundup of other hotel deals in New Orleans for the weekend, up to 40 percent off in some cases. And for more on what-to-do and where-to-watch specials, keep an eye on the convention and visitors bureau website, which is being updated as new offers come in.

For die-hard Colts fans (or just those who want to bask in the football frenzy), you can't visit Indy without a trip to the Colts-themed Blue Crew Sports Grill, which is packed with Colts memorabilia dating back to the arrival of the team in 1984 and, fittingly, has a horseshoe-shaped main bar. This weekend, the bar is bringing in a huge heated tent with tables, TV monitors, and a beer draft truck, with live entertainment both Saturday and Sunday before the game, as well as drink specials and prize giveaways. Expect an authentic fan experience: The owner of the bar is the president of the Indy Blue Crew, a group of super-loyal Colts fans and expert tailgaters.

Those wishing to get a little gambling in and to possibly make the vacation pay for itself can head over to Hoosier Park Racing & Casino, northeast of Indianapolis, which will raffle $500 every 15 minutes during the game.

Also, all-day Sunday, Mellow Mushroom, a pizza shop in nearby Carmel, is offering 18% off all deliveries and takeout orders, in honor of Colts quarterback Peyton Manning, who wears #18.

This weekend also coincides with the city's Devour Downtown Winterfest, which lasts through Saturday. More than 40 participating restaurants are offering three- or four-course meals for $30 each.

Both Super Bowl cities are welcoming travelers with deals on food, lodging, and activities. Check out their tourism websites: New Orleans and Indianapolis.

AdLand has archived the top Super Bowl ads since 1969