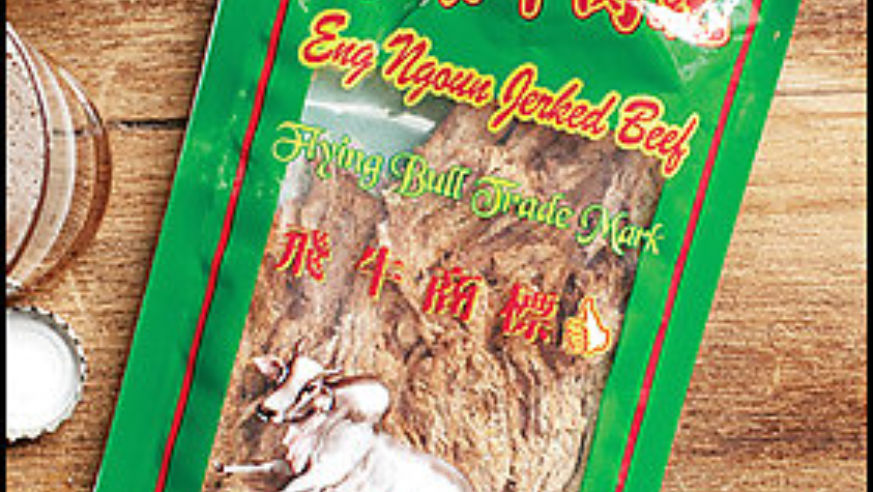 Love foreign supermarkets as much as we do? Now you can prove it. Send your supermarket souvenir photo and caption to Letters@BudgetTravel.com with the subject line "Supermarket Souvenir," and we'll consider your photo for our slide show.

Each spring, Cambodian farmers hold their breath as trays of food are set before a pair of oxen. The specific dishes the beasts choose to eat predict the bounty of the next harvest. The maker of this jerky has given the bovine an even greater ability—the power to fly. —Naomi Lindt

In Mexico, cleaning your clothes is a sultry affair thanks to Tango soap ($2). A dancer seduces you with her bare shoulders (is her bra in the dryer?), while the product promises to "express passion." Added bonus: clean undies. —Andrea Sachs

In Italy, cool design pops up just about everywhere, even on packages of $1 snack food. Each bag of Virtual chips features a lone corn chip, lit as if it were on display in the Uffizi Gallery. At a mere 154 calories per bag, it also leaves you feeling virtually no guilt. —Sean O'Neill

There really is something in the bottled water sold in the tiny Middle Eastern nation of Bahrain. Not only is Al Kamel's cardamom water ($1) used as a flavoring for milk and coffee, but its label claims that if you drink the water three times a day it will function as a "digestive inducer, sexual stimulator, tranquilizer, and tonic for the heart." —Summar Ghias

In Colombia, the health benefits of soy can't be oversold. Not only do packets of Leche de Soya, a powdered soy milk ($2), sport a spokesman who looks a bit like Richard Simmons, but the instructions include illustrations of sports that are ideal for soy-milk drinkers—bodybuilding, rollerblading, desk jockeying.... —Liz Ozaist

These Gluco-Max tea biscuits look like they should be from Japan, but they're actually from Uganda. Munch on enough of them and you might end up sumo-size, too. (18¢) --Laura MacNeil

Here's one way to stand out in a market flooded with bottled water: Replace the streams and mountains usually found on labels with a snarky sense of humor. Another Bloody Water is about $1.75 in Australian groceries. --Celeste Moure

Swing Ernie is a curvaceous, heart-stamped sponge that seems to be romantically involved with a hedgehog. In commercials, the two dance and roll around on a countertop to Paul Anka's "Put Your Head On My Shoulder." Why use sex to sell a sponge? "It's very French," laughs Spontex's marketing manager. Sold for $4 or so across France. --Ellise Pierce

Bottled in St. Kitts, the honey-based (and nonalcoholic) Giant Malt is sold at island supermarkets for around a dollar. But what's with the buff bod on the label? "Giant Malt makes you strong," claims Mark Wilkin, Carib Brewery's managing director. --Amy Chen

This makes twist-off caps look traditional: Iron Wine sells malbec cabernet and chenin blanc in aluminum cans. The 12-ounce cans ("When a bottle is too much but a glass is too little!" says ironwine.com) are available at upscale shops and bars in Argentina for $2 to $6. --Celeste Moure

There's nothing minor about a candy bar that combines the rich cocoa goodness of Swiss chocolate with chopped, roasted hazelnuts. It comes in various shapes and sizes--including this 46-gram bar made solely for rest stops and kiosks ($1.20). Yes, in Switzerland, even the snacks sold at gas stations are fancy. --Mike Iveson

In Greece, people tend to eat dinner at 10 p.m. or later, which explains the large number of light mezes (small plates) on most taverna menus. Thessaloníki-based Zanae has been canning traditional appetizers--such as grape leaves stuffed with rice, and giant butter beans or meatballs in tomato sauce--for nearly 70 years ($2). --Laurie Kuntz

Guidebooks say that in Portugal, food without wine is a snack, not a meal. But carrying a bottle for lunch isn't always practical. The solution: a single-serving box of white or red wine from the Estremadura region in western Portugal, available for 80 cents each. --Tom Berger

When the competition sports names like Rockstar and Monster, why link your energy drink with unwanted e-mail and a potted-meat product? Because that's living on the edge. Spam Energy Drink, $1, throughout Belgium, Finland, and the Netherlands. --Mike Iveson

Caviar for breakfast? It sounds like something out of a Jackie Collins novel, but there it was at the hotel buffet in Stockholm: creamed cod roe cut with potato flakes and tomato paste. Toothpaste-size tubes are sold at supermarkets for $1.40. Evidently, it's a popular after-school snack (on bread) in Sweden. Somehow we don't think Skippy has much to worry about. --Erik Torkells

In Myanmar, née Burma, people love tea so much they eat it--pickled, no less. Ah Yee Taung (which means "big aunt basket") steams and ferments green tea leaves, then pairs them with roasted sesame seeds and fried beans. "Pungent" is the kindest way to describe the concoction, which can be bought throughout the country ($5). --Laura MacNeil

It's only a .78-ounce bag of crispy puffed kernels, but if the peppy hiker on the package is any indication, Quinua Pop is all the fuel you'll need to trek across the Andes. Called the mother grain by the Inca, quinoa is heavy on protein, iron and vitamin B. Four-packs of the breakfast cereal are sold for 75 cents at Metro and other grocery stores in Peru. --Laura MacNeil

Despite the packaging, Leverpostei is actually not a puree of a small blond boy. Rather, it's a Norwegian pork liver pate best paired with salty crackers. It's sold in seven-ounce tins--some are decorated with girls, but contain the same tasty contents--for $1.70. --Litty Mathew

With these animal crackers, there's no question who sits atop the food chain: kids. Wildlife Cookie Company makes foxes, bears, and mountain lions (available at Yosemite and other national parks, $1.75), while Oahu-based Diamond Bakery opts for bite-sized Hawaiian sea creatures such as humpback whales, octopi, and dolphins ($1). --Brad Tuttle

Made with Scotch bonnet peppers, a Caribbean favorite, Hell Sauce, is named for the Cayman town of Hell. (According to the label, nearby rocks resemble "the smouldering remains of a Hell Fire.") The sauce is a kick, even if Hell is a tourist trap, just as one always suspected. It costs $4 for a five-ounce bottle at Foster's Food Fair on Grand Cayman Island.

New Zealand has four million residents, and about as many dairy cows. So it's small wonder that milk shows up everywhere, including the candy aisle. Heards Milk Chews ($2 for a seven-ounce bag at Foodtowns across the country) taste like milkshake-flavored Tootsie Rolls. Sweet. --Paul Brady

Slow-cooked, marinated quail eggs are considered fertility boosters in Taiwan, where they're sold as pang ti neng (in Taiwanese) or xiang tie dan (in Mandarin). Both translate as fragrant iron eggs--not that you can smell a thing through the serious vacuum packing. (Come to think of it, that's just fine.) They cost $6.50 at supermarkets and convenience stores. --Christine Y. Chen

Kranky and Crunky aren't just descriptions of hip-hop star Lil Jon after a long night. In Mexico, Kranky is a brand of chocolate-covered cornflakes; and in Japan, Crunky is a Nestle Crunch-like bar. Each brings attitude adjustment for under $1.

A mix of Indian spices and German sausage, Curry-Wurst is popular with munich clubgoers looking to line--and test?--their stomachs. A sliced pork sausage is doused in tomato sauce; toothpicks and a curry packet are tucked underneath. Plke holes in the lid, microwave, and sprinkle on the spice. It's sold refrigerated in grocery stores, including the MiniMal chain ($1.80).--Marilyn Holstein