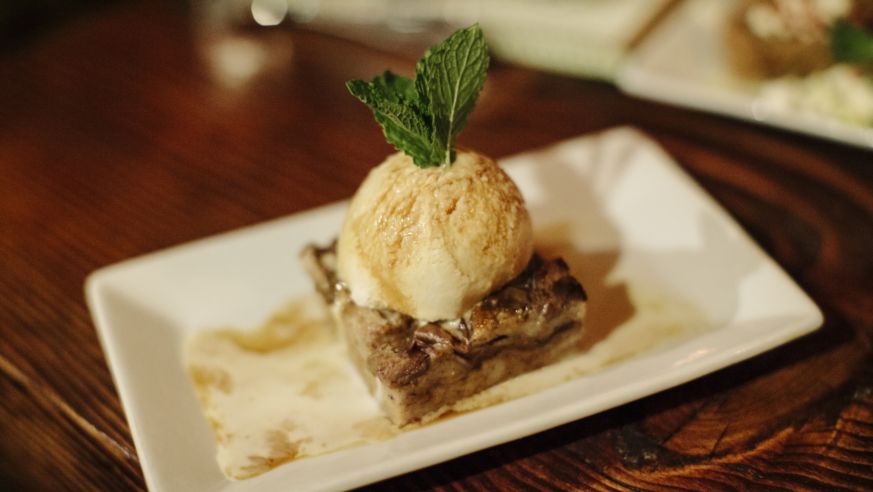 Check out the petimezi drizzle on that roasted grape bread pudding from Death Ave in NYC.

If you're a Grecophile, visiting Bronze Age Greece's ruins is probably on your bucket list if you haven't already checked it off, specifically the island of Crete's ancient Palace of Knossos, with its dolphin frescoes and proto-theater. Touring Crete's mountainous landscape and gorgeous beaches is one way to get a sense of Minoan civilization—but you can have an actual taste of it by trying petimezi, a non-fermented grape molasses used as a topping for everything from seafood to salad, or as substitute for honey. Sweetening food with the syrup was standard practice in Ancient Greece—evidence exists that even the Minoans used it.

Greek-born chef Michael Tzezailidis is bringing "Hellenic" food back at his new New York City restaurant Death Ave with modern spins on old-world dishes, like crostini troufes ($9) and fig ice cream ($8), and traditional Greek preparation techniques, such as brewing coffee with a Hóvoli (hot sand) system and squashing grapes in house for the petimezi.

To tide you over until your Grecian adventure, we asked Chef Tzezailidis to share his petimezi recipe, below, which you can make at home with just one ingredient—and a little patience. And if your trip takes you closer to Athens than to Crete, Tzezailidis has two must-dos to squeeze into your itinerary:

• Tsi Tsi taverna, in Glyfáda, Greece (near Athens). "Their souvlaki is excellent!"

• Lalária Beach, on Skiáthos, Greece. "It is only reachable by boat, but it’s completely worth it! The beach is entirely made up of round white rocks that go from small-sized at the beach to large in the deep water. The clarity is incredible, and the colors are fairytale."

Steps:
1. Thoroughly crush grapes by hand in a large bowl one bundle at a time.

2. Pour crushed grapes over a strainer to separate juice from pulp and stems. Repeat until you have all the grape juice.

3. Optional (but traditional) clarification step: Place 1 Tbsp of wood ash into a tied cloth and put it in a pot with the grape juice.

4. Bring the grape juice to a boil, and then set it to simmer for 1 hour, taking care to skim all foam. At the 1-hour mark, you can start checking the consistency of the syrup with a spoon. Boil it down until it has the consistency of maple syrup. If you added wood ash, you may remove it at this point and discard it.

5. Continued optional clarification step: Allow the syrup to sit in the pot overnight without being moved around. The wood ash helps the liquid rise and the sediment fall.

6. Pour the petimezi into another bowl. (If you took the optional steps, you would at this point disregard the sediment on the bottom of the pot by slowly pouring until you see sediment. Whether or not you added wood ash and allowed it time to settle, which is a quality-grade issue, does not really matter; the end product will be delicious. Although, the extra steps do tone down the bitterness.)

How to Use Petimezi

As a salad dressing: Mix it with red wine vinegar, and then later mix it with olive oil.

With dairy products: Pour it over ice cream, yogurt, or artisan cheese.

In tea: Use it instead of honey.

On meats: Pour it over spice-rubbed pork or chicken.

On seafood: Drizzle on grilled spicy shrimp, or as a salmon glaze.

For breakfast: Use it on toast, pancakes, or french toast.

With desserts: Eat it with bread pudding, rice pudding, or anything that needs a sweetener.