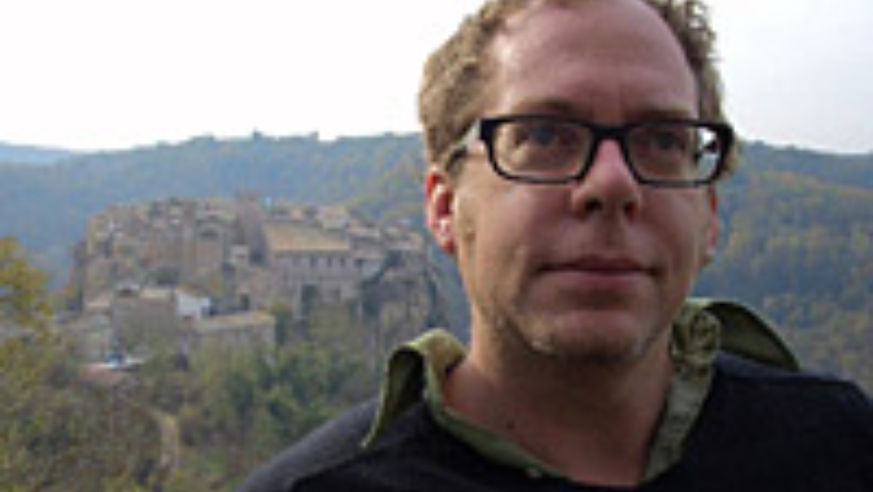 Hitting bookstores today is a travel book with an unusual story: An Irreverent Curiosity. Writer David Farley attempts to explain the mysterious disappearance of the foreskin of Jesus from the Italian hill town of Calcata. The plot of this nonfiction tale is reminiscent of Midnight in the Garden of Good and Evil, John Berendt's international bestseller about some peculiar goings-on in Savannah, Ga.

I recently spoke with Farley about the book:

Your story focuses on the Italian village of Calcata, which is about 30 miles north of Rome and has an unusual cast of characters. What's the CliffsNotes version?

In 1900 Pope Leo XIII made a decree forbidding (under the threat of excommunication) the speaking of or writing about a strange holy relic that had once been a papal-approved relic and was huge draw in the Middle Ages: the Holy Foreskin, which had resided since the sixteenth century in a medieval hill town near Rome called Calcata. Thirty-five years later, Calcata met the same fate of sorts, as it was condemned by the government (for fear its 450-foot cliffs were crumbling). But the village residents didn't start to abandon the town until the 1960s. As soon as they did, hippies and artists discovered it. They made it their own and even had Calcata removed from "death row." Meanwhile, in 1983, that forbidden relic, the foreskin of Jesus, mysteriously disappeared. So, three years ago, I moved to Calcata to live among these aging hippies and artists to try to find out who stole this once-rapturous remnant.

That sounds like you're making fun of Catholicism. Are you?

I suppose some people could—and will—see it that way. But I bet most readers won't. I put the relic into a historical context within the history of Christianity and relic veneration, so that the reader will understand how such a curio even existed and why people of past centuries viewed the relic with reverence. Through the same process of historical context, the reader will also see how the relic fell out of favor with the Church in the nineteenth century. I have to say, it was nice to be able to (finally) use that master's degree in history for something other than being good at trivia games.

Americans get so little vacation time, and when they visit Italy, they want to visit the famous spots first, such as Rome, Florence, Venice, Pisa, Naples, the Almafi Coast, Bellagio, and Milan. Could you give a few good reasons why Americans ought to consider visiting Calcata, like you recently recommended in a New York Times travel story on Calcata?

Besides being one of the best preserved medieval hill town in Italy, it's one of the weirdest (as I mentioned above). It makes for a great day (or weekend) trip from Rome because, as of now, most of the visitors are Romans who just come up for the afternoon. Spend a Saturday night in Calcata and you'll get a great sense of Italy's "counter culture" scene in just one village.

It occurs to me that if your book becomes an enormous hit, the locals will start running tours of Calcata and visitors from around the U.S. will descend on the town. What might such a tour cover?

Besides the locals themselves, Calcata offers a lot of intrigue for such a small place. The village sits like a cupcake atop 450-foot cliffs and is surrounded by a gorgeous valley. The base of the cliffs is punctured with millennia-old tombs carved out by the Faliscans, a pre-Christian tribe of people related to the Etruscans who were wiped out by the Romans in the third century, B.C.

There are also some great artists living there today (some of whom are quite successful) who don't seem to mind showing off their work: Sculptor Costantino Morosin, painters Giancarlo Croce and Romano Vitali, and mosaic artist Pancho Garrison (who also runs a great restaurant called La Grotta dei Germogli) are a few that come to mind. Finally, there's the church—and the niche above the alter—where the Holy Foreskin had been kept.

An excerpt from chapter 7 of your book was included in this year's anthology of The Best Travel Writing, as compiled by the folks at Travelers' Tales. It's one of my favorite non-fiction set pieces of all time. The subject is about the troubles a visitor to Italy can land themselves in if they don't use the right Italian phrase. Rather than spoil the fun for readers by mentioning specifically the phrase here, I'll ask a more general question about getting "lost in translation" instead: What's an example of an Italian word or phrase that English-speaking visitors commonly misuse or mispronounce, and what's the correct word or phrase?

I've always thought grazie, the word for "thank you," indicates how well (or poorly) a non-Italian spoke the language. Most tourists just let the word dribble from their mouths—saying gra-tzee—probably mimicking what we've heard on TV commercials for frozen pizza. But the proper pronunciation takes a lot more effort and tongue twisting that can only be mastered with serious practice. Also, Americans constantly mispronounce bruschetta. I once ordered some bruschetta at an Italian restaurant in New York—pronouncing it correctly, as "broo-sket-ta"—and the waitress actually corrected me, saying "you mean broo-sheta, right?"

At one point in the book, you talk about Halloween and how the holiday is increasingly celebrated in Italy. I was surprised by that. Could you describe for your readers what it's like to witness this classic U.S. holiday "in translation"?

Because Halloween doesn't have the long historical legacy in Italy as it does in the United States, it was introduced to the country under different circumstances. It's more of an adult holiday in Italy that, I suspect, alcohol companies are as much responsible for its promotion than anyone. Starting in mid October, every second commercial on Italian TV is a Halloween-themed ad for booze. Thanks to Calcata's bewitching looks and perhaps its reputation as a center of counterculture, it's an almost natural place for people in the area (including Rome) to gravitate to on October 31. As a result, the village turns into one massive party on Halloween and the locals really deck the place out.

It must be a dream gig to live in Italy for a year writing a book. What was a happy side benefit of being able to do that?

Being accepted by the locals creates an endless amount of experiences that people with the travel bug—people like me who almost fetishize "real" interactions with locals—can only dream of. In the summer, for example, there were nightly dinner parties on the square: everyone would show up with a bowl of something they'd thrown together and a bottle of wine and we'd sit around for hours talking and laughing. Likewise, you end up in situations—like driving around in cars with people—that turns into situations a tourist never would experience. I was privy to seeing cars break down, meetings in the mayor's office, and even the inner circle of geriatric men at the coffee bar. Also, if you show your face at the same restaurants enough, you start to get the regular's discount, which is always nice.

When they hopefully make your book into a movie, which actor would you like to play the character of you?

The only actors people have said I resemble are self-esteeming crushing in their physical appearances so no one who looks like me would play me in the movie version. But that doesn't quite matter anyway, because by the time the script would go through the major studio machine, my character would probably end up being played by someone like Zac Efron who goes to Calcata in search of a weird relic, but ends up in a romantic tryst with the young village beauty and whose main goal becomes to gain the approval of her incredulous father until he saves the family business with grand heroics. In the end, the couple live happily ever after restoring a villa just outside of Calcata and, as it would be shown in the last scene, he begins typing out on an old typewriter a book about the whole experience.

An Irreverent Curiosity for sale at Amazon.