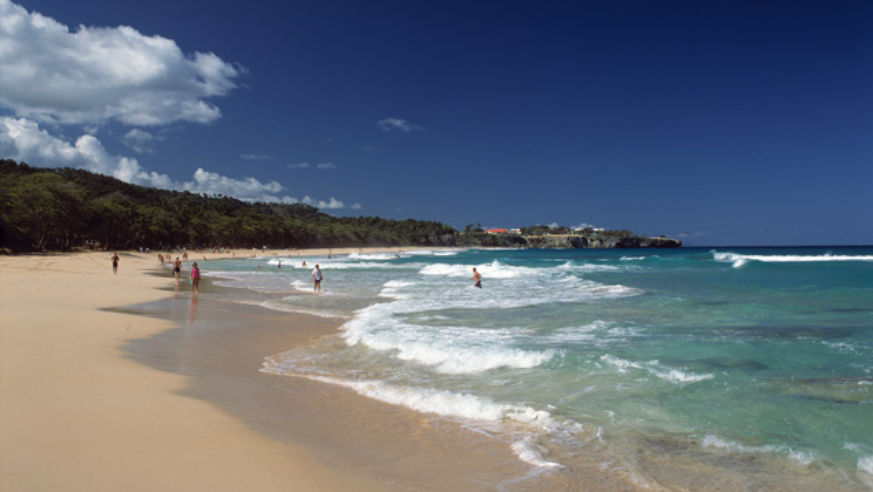 Use this year's tax refund to escape to the scenic beaches on the north coast of the Dominican Republic.

The average American will get almost $3,000 as a tax refund. Sounds like it's time for a vacation! Here are seven great trips to spend your rebate on—and don't worry, with prices starting at $818 per couple, you'll still have some money left over.

There's no need to fear tax season, especially since tax refund checks average some $3,000. Financial planners may tell you to save it for a rainy day, but, not surprisingly, we say there's no better use for a windfall than a vacation. We are always on the lookout for great travel deals, so we priced out three nights' hotel for two people (and one for a family of four), including transportation and a budget of $125 per person for meals, plus activities from horseback riding tours to surf lessons (all prices were valid at time of writing, but are subject to change). Whether you want to take the family on a national park adventure or go on a romantic vacation to a European capital, we've outlined seven vacations that fit the budget and still leave enough in the bank to appease your accountant.

The 43-mile Highland Scenic Highway runs entirely through the Monongahela National Forest, one of the most ecologically diverse in the country, with 75 different species of trees and more than 225 different types of birds. But watching the wilderness out the car window isn't any fun. Take a two-hour horseback ride through the New River Gorge, which is a new breeding spot for Bald Eagles (800/787-3982, aceraft.com, $69 per person). Where to stay: Greenbrier County's Lewisburg (voted the Coolest Small Town of 2011!) is an oasis of Appalachian culture and Washington Street, the main thoroughfare, hums with cafes and antique shops. Soak up some local history by staying at the General Lewis Inn, a genteel inn situated on the site of an 1862 Civil War battlefield (301 East Washington St., 800/628-4454, generallewisinn.com, from $110).

The self-described "Edge of America" has loads of down-home Southern charm, with a lively fishing pier, string of crab shacks, and plenty of room to stretch out along six miles of sand.

Folly is a barrier island surrounded by waters populated with wildlife including loggerhead sea turtles to bottlenose dolphins. Get up close and personal on a kayak—Flipper Finders is the only full-service outfit in town, with a popular sunset tour amongst Folly's estuaries (843/588-0019, flipperfinders.com, $45 per person). You can't spend time here without having at least one seafood-centric meal: The Crab Shack is everything you want in a local joint: platters of fried seafood, buckets of large Carolina shrimp, and baskets of hush puppies (26 Center St., 843/588-3080, crabshacks.com). Life unfolds at a pleasingly slower pace here; if you need some "big city action," Charleston is a short 15-minute drive away. Where to Stay: Housed in a restored bungalow, Beachside Bed and Breakfast's colorful accommodations are anything but stuffy: Its "70s Room" even features an egg tub shower and an original 8-track player (107 E Erie Ave., 843/633-0184, follybeachsidebb.com, from $169).

There's no denying the city itself has broad appeal: cuisine, culture (don't miss Portland Art Museum's Rothko exhibit through late May 2012), and our favorite: no sales tax.

Spring is a great time to visit the Rose City, when the extensive network of gardens is in bloom. At Lan Su Chinese Garden, you'll find Oriental classics like hibiscus and silk trees (lansugarden.org, $9.50). The Portland Japanese Garden, with its pagodas and stone lanterns as well as cherry blossoms and bonsai, is considered the most authentic outside of Japan (japanesegarden.com, $9.50). Refuel at one of several food trucks downtown: Nong's Khao Man Gai is famous for its poached chicken with soybean, garlic, ginger and chile (S.W. 10th and Alder, from $6.50). And you can't come to the Pacific Northwest without sampling the fruits of the local vineyards. Locals recommend Noble Rot, a fourth-floor wine bar where you can swirl delicate, homegrown Pinots whose cult status have become legend (1111 E Burnside St., 503/233-1999, noblerotpdx.com, wines flights from $12). Where to stay: Save big on transportation by booking a hotel along Portland's Max rail line. Hotel Deluxe is located just two blocks from the Jeld-Wen Field station, and is full of Hollywood-style glamour like black and white photos and regency furniture (729 SW 15th Ave., 503/219-2094, hoteldeluxeportland.com, from $149).

There are still plenty of beaches along the Dominican Republic's North Coast where you can escape the masses. The trick is to fly into quieter Puerto Plata.

Ditch the all-inclusive scene west of the airport and head east toward Cabarete, a coastal town that still retains a (somewhat) local feel. Dip your toes into Kite Beach, or take a day trip to Playa Grande, a scenic stretch of white sand that won't stay undeveloped for long. Try something new and book a surfing lesson—a two-and-a-half-hour course on Playa Encuentro is a great way to test the waters. Where to Stay: Go around the rocky bend just east of the main town to the deco La Punta Apartments. Even with a prime oceanside location, swimming pool, and large terrace, the rooms are a steal (011-809/571-0897, lapuntacabarete.com, from $64).

*Based on round-trip airfare from New York City to Puerto Plata for two people.

The Dutch capital is more affordable than other major Western European cities like Paris and London, and you can fly nonstop from 13 North American gateways.

Ask any local and they will tell you that the Renaissance architecture and winding canals of Amsterdam are best seen by bike. Secure your transport at MacBike for as little as $8 per day, pedal over to Vondelpark, an oasis of green where it seems the entire city comes to hang out. Amsterdam's wide variety of ethnic kitchens are great for the budget and are not short of flavor. Sari Citra is a flavor-packed Indonesian restaurant with dishes like Bali beef with green beans-the perfect complement to a long bike ride (52 bg Ferdinand Bolstraat, 011-20/675-4102). Where to Stay: The 26 rooms at Chic&Basic in the Jordaan district are just that, but the rate includes perks like free basic breakfast (cereal, juice, boiled eggs) and wireless internet. Be sure to request a room with a  view of the adjacent canal (13-19 Herengracht, 011-31/205-222-345, chicandbasic.com, from $150).

*Based on round-trip airfare from Washington, D.C. to Amsterdam for two people.

Tame hikes like the Watchman Trail—with panoramic views of the namesake spire—are an easy way to get your bearings (and perfect for kids). More adventuresome trails will have you wading across canyon rivers, exploring petrified forests, and passing through epic freestanding arches. Pack your constellation guide: On clear nights, stargazing is among the best in the continental U.S. Bring a picnic lunch, but for dinner make your way to Whiptail Grill, a popular Southwestern joint housed in converted fueling station (445 Zion Park Blvd., 435/772-0283, enchiladas from $12). Where to Stay:Driftwood Lodge is located right outside of Zion Park (they offer a free shuttle) and has family-sized rooms, a pool, and unobstructed views of the surrounding canyons (1515 Zion Park Blvd., 888/801-8811, driftwoodlodge.net, from $219 per night for four people).

*Based on round-trip airfare from Seattle to Las Vegas for four people.

Book a trip for the diverse and happening arts scene in Reykjavik as well as the many natural wonders. And even as early as April, the average low temperature rarely dips below the freezing mark.

Reykjavik is a small city (about a quarter the size of Los Angeles) but packs a lot of culture into one tiny area, including art museums and galleries with extensive catalogues of works by Icelandic artists. The waterfront Hafnarhus, part of the Reykjavik Art Museum, is home to a large collection of works by postmodernist painter Erró (17 Tryggvagata, 011-354/590-1200, artmuseum.is). Iceland's main draw, though, is the natural beauty further afield. Reykjavik Excursions' Golden Circle tour hits some key highlights: Gullfoss Waterfall, Þinghvellir National Park (site of the Atlantic rift), and Geysir hot springs (011-354/580-5400, re.is). Speaking of hot springs, the country's most famous attraction is the Blue Lagoon, one of the best hot springs in the world (011-354/420-8800, bluelagoon.com, entrance fee $39 per person) Where to Stay: Reykjavik's Hotel Bjork is right in the city center and has 55 minimalist rooms. The included breakfast is a bonus, as are stunning views of the mountains and harbor (22-24 Brautarholt, 011-354/511-3777, bjorkhotelreykjavik.com, from $135).

*Based on round-trip airfare from Boston to Reykjavik for two people.