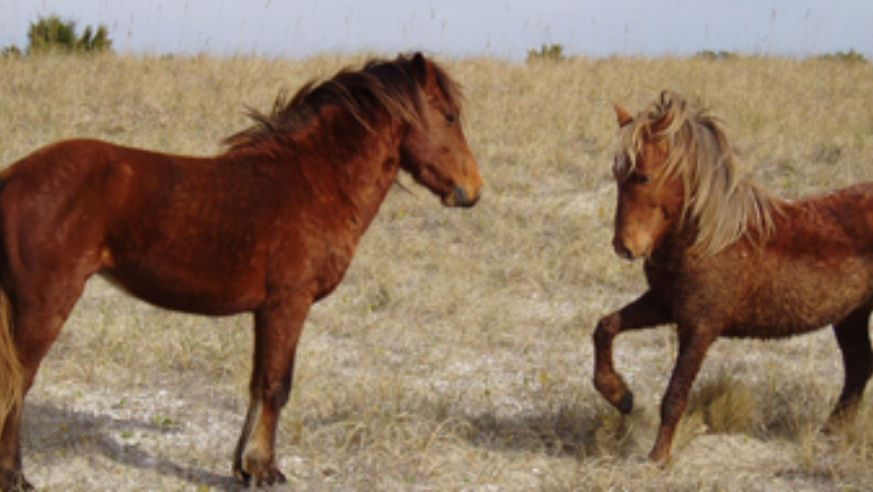 On a tiny island on North Carolina's Crystal Coast, a herd of beautiful wild horses is surviving—and thriving—in the wake of Hurricane Irene.

When I was researching an update on the status of North Carolina's Outer Banks, which were hit earlier this year by Hurricane Irene (and are doing much better, thanks), I came across the uplifting story of Aftermath. And I have to share.

Allow me to introduce the Shackleford Horses, a wild herd that inhabits the nine-mile-long island of Shackleford Banks, part of North Carolina's Crystal Coast, at the southern end of the Outer Banks. People often can't resist calling the diminutive animals ponies, but as romantic as "wild ponies" may sound, they are actually just small horses.

The Shackleford herd's important fans include the National Park Service and the Foundation for Shackleford Horses. Both institutions regularly perform a horsey census, complete with photo IDs, to monitor herd numbers. During the storm, the horses had no access to shelter. Post-Irene, the Foundation undertook the task of recounting to make sure everyone was okay.

To her astonishment, Carolyn Mason, the Foundation's hands-on president who led the count, actually discovered a small population increase. A mare, Anastasia, had foaled a colt.

In keeping with herd tradition, the tyke was named with the same first letter as his mother. The name? Aftermath.

When I asked about the moment of discovery, Mason said, "I feel like I've been given a gift each time I first see a new foal. Anastasia, the mare came forward slowly, and Aftermath stayed right beside her. I was totally surprised and fascinated—and just tried to be quiet, take my photos, and not intrude."

(Take a look at photos from that day in the Foundation's Facebook photo gallery.)

Mason says tourists are welcome to ferry over to Shackleford Banks to see the horses. "While it is not in the best interest of either horse or person to get too close, people should look, photograph, and enjoy the wild horses for the unique part of North Carolina that they are," said Mason.

On that note, I suggest a fun, weekend jaunt to the Outer Banks. Fly into Coastal Carolina Airport in New Bern and snag a rental car. Bed down in the quaint city of Beaufort, at the lovely Pecan Tree Inn. Make room for at least one meal each at local-institutions Blue Moon Bistro and Beaufort Grocery. Be sure to see the newly renovated Cape Lookout Lighthouse on nearby Core Banks island. And, of course, top off your trip with a visit to see the wild horses of Shackleford Banks and, if you're lucky enough to spy him, Aftermath.

Leave Every Child Behind: Biking the Outer Banks