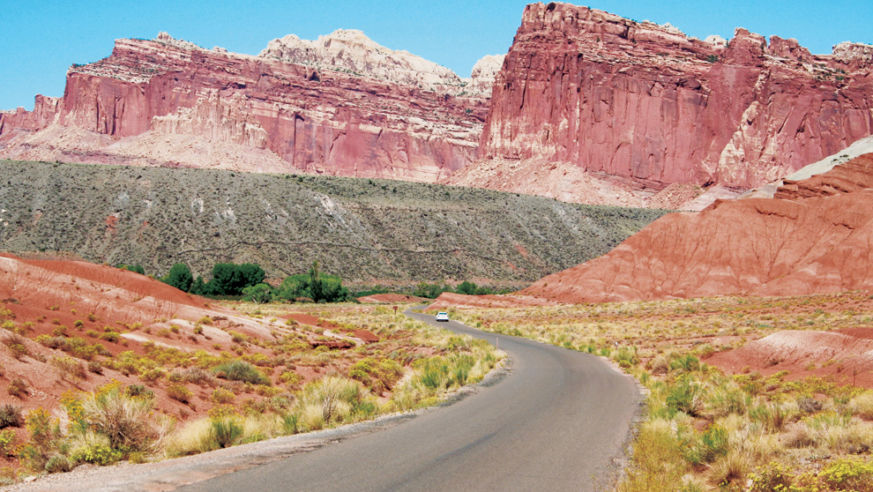 Most people come to the Southwest for one of three reasons: Grand Canyon, Zion, or Arches National Park. But while the masses head to the A-list sites, the roads that connect them are dazzling in their own right. Few are more spectacular-and empty-than Utah's little-known Highway 12.

Running between Capitol Reef and Bryce Canyon National Parks, the two-lane byway packs some of the Southwest's most beautiful landscapes into a single 124-mile strip of winding blacktop. This is remote country-nothing but waves of Navajo and Wingate sandstone, slot canyons, and funky little towns. The road has two main entry points-one at the north (Highway 24), and one at the south (U.S. 89)-leaving the rest to the lucky few who know where else to access it.

It was precisely this promise of solitude-and directional simplicity-that lured my friend Kelsey and me one balmy October weekend. Our first stop was Capitol Reef National Park, near where Highways 24 and 12 meet (nps.gov/care). Long and narrow, the park protects the 100-mile-long Waterpocket Fold, a rippling river of red rock that could be a backdrop for a John Ford movie. We hit the park's 90-minute scenic route, cruising through huge rocky amphitheaters, braking for a hike, and picking apples in orchards originally planted by Mormon pioneers a century ago. When evening fell, we hopped into the car and drove a few miles south to Torrey.

At first glance, the loose collection of clapboard houses seemed like your run-of-the-mill cowboy crossroads. But a trip down the mile-long main drag, dotted improbably with three small art galleries, revealed another, more eclectic side. "Artists come for the scenery, open space, and peace and quiet," said Patricia Priebe-Swanson, co-owner of Gallery 24 and a painter who relocated from Seattle (135 E. Main St., gallery24.biz). "I'm not a woo-woo-type person, but there's an energy here that just draws us in."

Torrey is the northern terminus of Highway 12-we hadn't even made a dent in our drive yet-but the next day, Kelsey and I hit the road in earnest, winding into the Henry Mountains, the last-mapped range in the continental U.S. As we climbed, pines and aspens crept in among the junipers, and views of burnt-red canyons punctuated the forests. South of the Henrys, we pulled into the tiny town of Boulder.

Little more than a few wooden cabins and barns, it has long been an outpost for nearby ranchers, but like Torrey, Boulder is beginning to appeal to a more bohemian crowd. That was immediately clear to us at Hell's Backbone Grill, a restaurant decorated with Buddhist-prayer flags and pumpkins from the on-site organic farm (20 N. Hwy. 12, hellsbackbonegrill.com, entrées from $13). Kelsey and I settled into the cozy dining room and dipped fresh local peaches into a pot of pillowy goat-cheese fondue. Our final stop for the night was next door, at the rustic Boulder Mountain Lodge, a trio of two-story cabins set in the middle of an
11-acre bird sanctuary (20 N. Hwy. 12, boulder-utah.com, doubles from $79).

If Highway 12 had been beautiful up until this point, what followed the next day was positively surreal. We traveled through seemingly endless fields of sage and snaked along a stomach-twisting ridgeline known as the Hogback that was barely wider than the road. It didn't even feel like driving-more like flying an aircraft at low altitude.

About 18 miles south, Kelsey and I arrived in Escalante, a town at the edge of Grand Staircase-Escalante National Monument (ut.blm.gov/monument). The park contains more than a million acres of canyons, and if there's one man who knows them best, it's Rick Green, owner of Excursions of Escalante (125 E. Main St., excursionsofescalante.com, guided trips from $125). Rick led us out to the maze of chasms, where we shimmied into a slot scarcely wider than a basketball.

Later that evening, we checked in to a dollhouse-like log cabin at Escalante Outfitters, a combination outdoor store, coffee shop, pizzeria, and lodge (310 W. Main St., escalanteoutfitters.com, cabins from $45). As we watched the sun set over the lacy edge of the Kaiparowits Plateau from the lodge's front porch, Kelsey and I sampled the local Squatters Full Suspension Pale Ale and drank in a landscape we never would have seen if we'd stayed on the interstate. Tomorrow we'd go to Bryce, but for now, we were content to simply watch the pinks of the evening sky give way to stars along an otherwise sleepy stretch of road.