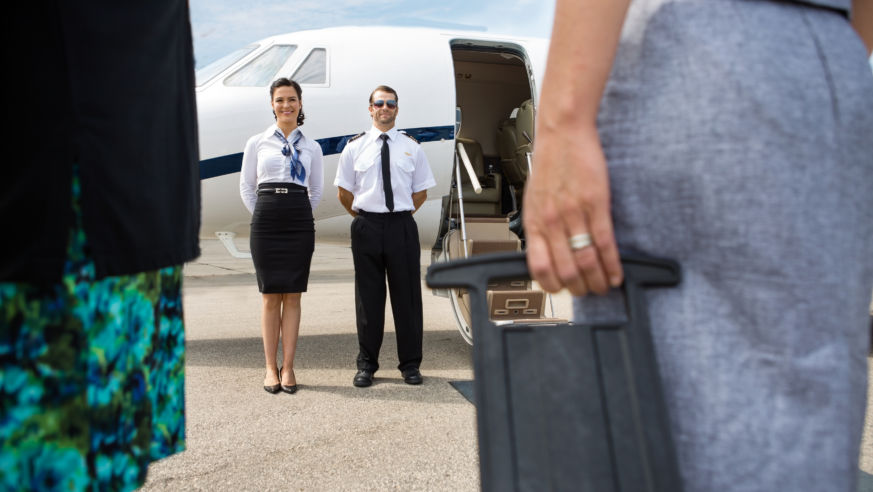 With high-profile incidents of "air rage" going viral these days, an etiquette expert weighs in on the do's and don'ts of air travel.

It seems as if hardly a week goes by without us hearing about another incident of bad behavior on an airplane. In January, for instance, a San Francisco-bound flight from Australia had to turn around and make an emergency stop in New Zealand because a man in a middle seat became irrepressibly enraged—swatting at the beverage cart, delivering a loud tirade to the other passengers, speaking offensively to a flight attendant. News reports say he was in the middle seat and was upset because people on either side were having a conversation over him.

Every study and report that travel companies release indicates that air travel is on the rise. An increase in the number of aircrafts and routes and the boom in budget airlines make travel more accessible to everyone. That means flights are dependably more crowded, with jostling for overhead bin space. And with all the air traffic, waits on tarmacs can be epic. People are anxious about missing their connections and some are just anxious because, well, flying does that to people. Tensions are high for those reasons and others. It doesn’t take much to make a person snap. And anger and distress begets anger and distress.

According to the International Air Transport Association, a trade organization, the number of violent in-flight confrontations is on the rise. A recent report says that the number of air rage incidents last year totaled 10,854, up 14 percent from 2014. Flight crews categorize air rage in one of several categories: belligerent behavior, emotional outburst, noncompliant behavior, and incidents involving drugs, alcohol, smoking, or sex. According to a report published in May 2016 by the journal Proceedings of the National Academy of Sciences, belligerent behavior and intoxication were more common in first class, whereas emotional outbursts, such as a panic attack, were more common among economy passengers. What’s more, an outburst by an economy class passenger is almost four times as likely to have an air rage incident if they’re on a plane with a first-class section. Interestingly, though, according to the study passengers are about two-times as likely to have an outburst if they boarded through first class (vs. boarding in the middle of the plane).

But there are ways to keep calm at 36,000 feet and ensure that others around you do the same so that everyone arrives safe in mind and body. We checked in with Lizzie Post, president of The Emily Post Institute, host of the “Awesome Etiquette” podcast, and great-great-granddaughter of the legendary etiquette doyenne Emily Post. Here are her tips.

WHAT EVERY AIRLINE PASSENGER SHOULD DO

1. If someone beside you is noticeably anxious because, for instance, of fear of flying, wait a minute to see if it passes, then ask the person if conversation helps or if he’d rather be left alone to breathe and relax.

2. If you feel endangered for any reason by a fellow passenger, quietly and patiently get up and speak to a flight attendant. Tell him or her the person next to you is agitated and you’re uncomfortable. Ask if there’s anything they can do to help your seatmate or, if it’s really bad, can you change seats. Post notes: “Be careful what level of responsibility you put on a flight attendant. They’re there to help. Let them know the situation, but speak in a calm and gentle way while seeking sympathy and support, rather than getting angry at them.”

3. When it comes to the nagging issue of reclining seats in the cramped surroundings of economy class, if the seat in front of you is reclined and it’s really interfering, instead of asking the passenger simply to put the seat up, it is preferable to first establish that you’re not being too self-centered and demanding and ask if, for instance, they can put the seat up for a little while, like, for instance, when the drinks are served.

Remember, Post says, “it’ll all be over in a few hours and don’t forget that you can get up and move around to counteract how much time you spend with the person’s head in your face.”

WHAT EVERY AIRLINE PASSENGER SHOULD NEVER DO

1. Whatever you do, do not address an irate stranger on your own. “Safety trumps etiquette,” Post insists. So rather than telling someone who’s upset that she needs to sit and be quiet, seek out help from a flight attendant.

2. To avoid rustling the feathers of a potential whiner in the seat behind you, don’t recline, if you can help it. You might call this the "martyr's approach" to a pleasant flight.

3.  While you can always make a polite request if a person in front of you has the seat down, do not, under any circumstances, get ticked off if your request doesn’t work. “Every person purchased a seat and they’re allowed to use all its functions,” Post reminds.