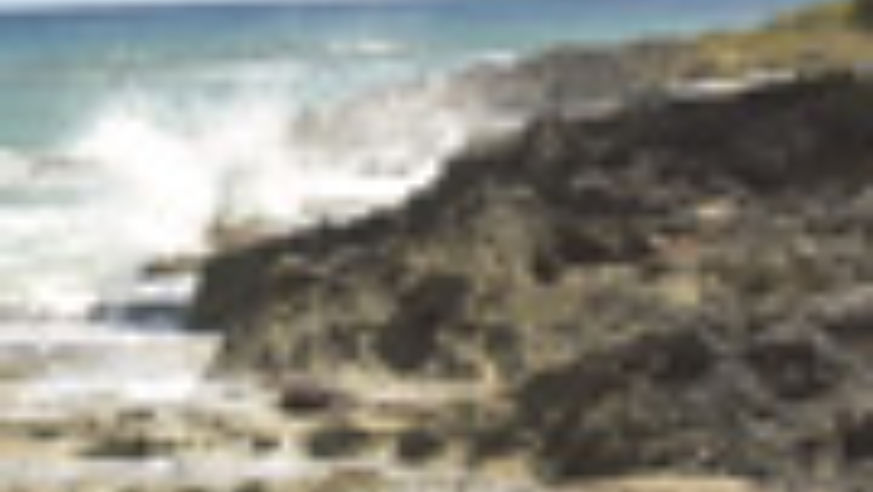 There's no better place to just hang loose than the perpetually mellow town of Cabarete, on the Dominican Republic's northeast coast.

After driving 15 minutes from Cabarete along a sandy road, I reach La Boca, a broad estuary where the Río Yásica meets the sea. To my right is a glassy lagoon, and beyond that is a deserted beach. Directly in front of me there's a pale green lean-to thatched with palm fronds. At one of the tables scattered on the sand, three young Dominican women sip drinks from hollowed-out pineapples. The name of the place, La Boca Grill, is on a battered surfboard hanging from the roof. It's an idyllic little slice of the tropics.

My unofficial guide is Marcus Bohm, a shaggy German who settled in Cabarete 17 years ago. A former pro kiteboarder, Marcus runs an array of ventures, including a surf school (321 Takeoff), a sailboard-repair shop, and an international water-sports competition called Master of the Ocean. I met Marcus when he stopped by my hotel to chat with a friend. With characteristic Cabarete friendliness, he offered to spend the day chauffeuring me around in his beat-up white pickup plastered with surf stickers.

Marcus motions for me to follow him and another man into a dank, dirt-floored room. The man opens a cooler and pulls out fish in a rainbow of shimmering purples, yellows, and blues. Half an hour later, I'm seated at a table, obsessively licking my fingers and staring at the remains of one of the most memorable meals of my life: a foot-long grouper fried to perfection and served with rice and beans, fried plantains, a simple salad of cabbage and thinly sliced tomatoes, and an ice-cold Presidente beer. The meal costs less than $10--including tip.

"I always bring out-of-towners to La Boca, because it's impossible not to fall in love with the place," says Marcus.

The Dominican Republic occupies the eastern two thirds of the island of Hispaniola (the rest is Haiti), a popular landing spot for travelers ever since Christopher Columbus washed ashore in 1492. During World War II, it became a haven for a small group of German Jews. Even today you'll notice the occasional German road sign.

Santo Domingo, on the island's southern coast, is the capital and a bustling port. Punta Cana, on the eastern tip, attracts the European set with upscale accommodations. To the north is Puerto Plata, a beach resort strip located next to the world's largest all-inclusive complex, Playa Dorada.

Cabarete, meanwhile, is a ramshackle beach town of 20,000 people about 20 minutes east of the international airport at Puerto Plata. For much of its history, the town was an isolated fishing village. But in the past two decades, hotels, restaurants, and surf shops have filled the main drag, Calle Principal, without any apparent master plan. An old Victorian house sits next to sleek condos, which sit next to a palapa. The town is only about a mile and a quarter wide, but Calle Principal is choked with buses, street vendors, pedestrians, and mopeds carrying families of four.

Cabarete is among the world's top spots for windsurfing and kiteboarding, and those sports have created the culture and driven the development. There's a sizeable young expat community, and backpacking adrenaline junkies share the beach with families and couples. On my first day, I met a British family who had just finished a group surfing lesson--even the 82-year-old grandmother.

Unlike in some other parts of the country, here the Dominican character shines through. Merengue music is a constant, pumping out of every window, and the people are welcoming. Simply smile and say hola, and people smile back, doors open, and drinks are offered. And then you find yourself in a place like La Boca.

After lunch, Marcus takes me to the mountains. Cabarete's southern edge is lined by the foothills of the Cordillera Septentrional, which not only make for a dramatic backdrop, but provide a venue for non-beach activities such as waterfall climbing, horseback riding, and caving.

The road eventually turns into a dirt path that leads to El Choco National Park, a 48-square-mile reserve with mango and avocado trees, hundreds of caves, a dizzying web of mostly unmarked trails, and human settlements that were grand­fathered in. As the road climbs, the dirt gives way to deep-red clay. We pass a couple of shanties hidden among the trees, and a dozen barefoot young boys come chasing after us. Marcus slows down, and they scramble into the back of his truck. The journey is a short one: Only 100 yards farther, the road peters out. We all pile out, and the kids dash down the slope to a spring, tearing off their clothes and jumping off a big rock.

From there, Marcus and I hike a few minutes up an unmarked trail that leads to a lookout with views of the coast, the cerulean water far below winking in the sunlight. Caribbean in every aspect, this Atlantic has no similarity to the one I know in the U.S.

We continue on to a cave located inside a nearby hill, descending into the cool darkness. Using my cell phone to light the way, I see huge stalactites and passages that plunge off in all directions, mostly straight down. One of the Dominican boys scampers right past me, disappearing into a pitch-black, nearly vertical shaft. "There are deep pools inside the cave, and the kids grow up playing in them," says Marcus. "This is their version of a playground." I point out that the boy was barefoot and that the rocks are really jagged and sharp. Marcus explains that sandals are a luxury the boy probably can't afford.

As we drive down the mountain, we come upon a group of boys playing baseball. "Who's the next Sammy Sosa?" Marcus calls out. The boys erupt in yells. One comes running after the truck and smacks me a high five as we pass by. On his face is one of the purest expressions of happiness that I've ever seen.

I'm staying just a few miles outside of town, at Natura Cabañas. It feels a little like Gilligan's Island with yoga and Wi-Fi. Each of the 11 thatch-roofed bungalows is unique: Mine, Cabaña Piedra, has a large bedroom and a kitchen­ette, screen walls, a porch, and a giant, open, stone-floored shower in the bathroom.

Because the compound is so spread out, the only thing guests hear is the sound of crashing waves and the steady drumbeat of the almond trees dropping fruit on the ground. An open-air yoga studio overlooks the beach, near a complex of spa-treatment rooms and an area for beachside massages. The beach in front of the hotel is small, but you can stroll two minutes in either direction and have vast stretches entirely to yourself. (During one long walk, I encountered a total of three people and two stray dogs.) As another guest said, "This isn't Fiji?"

That night, I enjoy a surprisingly sophisticated meal--octopus-and-mint salad, sesame-crusted dorado, a glass of white wine--at Natura's open-air restaurant, before venturing into town. The center of Cabarete is cluttered with bars and restaurants, from Dominican merengue clubs to slick Euro lounges to get-drunk-quick beer halls (one of which is called José O'Shay's). I find a spot at the bar at Lax, a European-style lounge with a hip, good-looking crowd. Around me, people are speaking German, French, Spanish, English, and Portuguese. As the evening progresses, the music gets louder and the dancing picks up. I finish my beer and wander down the beach until the sounds of the clubs are replaced by the crash of the ocean's waves.

the next morning, i head into town for breakfast at Panaderia Reposteria Dick, a favorite among the locals. For $4 or so, I have eggs with a mild Dominican sausage, a basket of fresh-baked bread with jam, and a cup of strong black coffee. I spend the rest of the morning browsing the cigars, surf gear, and art at Cabarete's shops and beach vendors (I bought a merengue CD). For a dollar, a guy on the street plucks a coconut from a pile strapped to his bike, lops off the top with a machete, and pours the juice into a paper cup.

The best adventure outfitter in town, Iguana Mama, is in a low-slung yellow building on the main strip. Run by Steve Leone, a 27-year-old former commodities trader from Chicago, the company offers a full range of land and sea adventures. On Steve's recommendation, I make my next stop the Velero Beach Resort, the swankiest hotel in town. The 50-room hotel has an infinity pool, a mellow outdoor bar, and giant four-poster beds set around the pool deck. I can see the full expanse of Playa Cabarete: a mile and a quarter of fine sand fronting glittering water. The wind is picking up, and a few kiteboarders are heading to the beach. It's time to check out the main event.

Kiteboarding is to Cabarete what surfing is to the North Shore of Oahu. Riders are tethered to kites that propel them across the water on short surfboards. On some days, the sky over the beach is aflutter with kites. This afternoon, more than 100 kiters are out on the water, with at least 50 windsurfers. To the west is Bozo Beach, so called for the beginners who drift there and are unable to turn back. I watch them flail for a while before hoofing it down the road to Kite Beach, where the pros go. There are no sunbathers and no windsurfers, just kiters and the people photographing them. The scene is unreal. A guy with short bleached dreadlocks zigs in toward the beach, then zags a hard 180 against a wave and catches at least 15 feet of air, twisting more 360s than I can count.

At the end of the day, I meander over to La Casa del Pescador, an old-school fish house. The furniture is mismatched, the grilled mahimahi is fresh, the Presidente is cold, and the Dominican guys at the next table listening to merengue on a boom box are all the entertainment I need. It's as good as a beach trip gets--that is, if you've never been to La Boca.