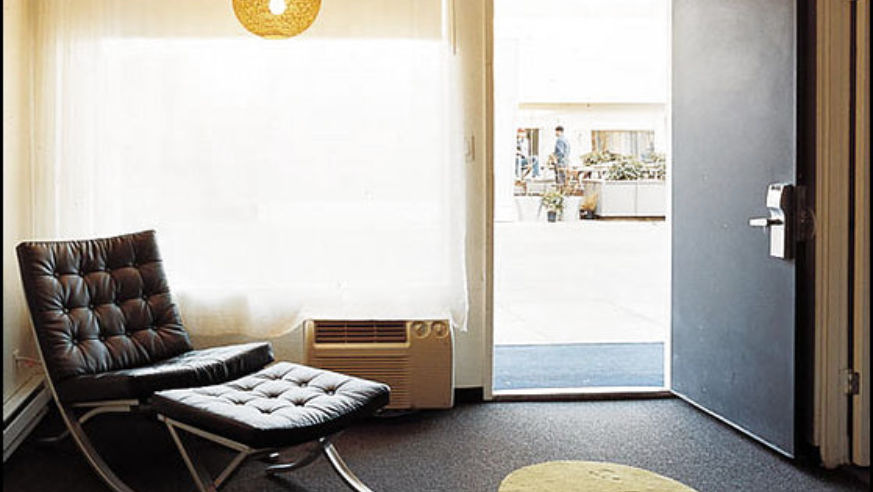 The Jupiter's Room 129, with its knockoff Barcelona chair

A new generation of hoteliers-make that moteliers-is giving the roadside classic the respect it deserves.

This 43-year-old building in Portland's booming Lower Burnside neighborhood (known as LoBu) has history: The lounge in the downstairs area used to be an underground piano bar in the '60s called Sam's Hideaway, an infamous secret meeting spot for trysts and backroom business deals. Kelsey Bunker, a former lawyer, joined forces with Tod Breslau, a local real-estate entrepreneur, after Breslau heard the club and motel (which had become a Travel Inn) was up for sale. Bunker loved the place enough to change her career path, and they took a full year to renovate the 80 rooms. "The bones were really good, but there was so much dry rot," says Bunker. "It needed a ton of gutting and maintenance." Six months ago, the Jupiter Hotel officially opened. Among the playful new additions: Wall-size photoscapes of forests or city scenes, an outdoor fire pit, and slate doors that invite doodling (colored chalk is provided). Bunker kept the spirit of Sam's alive in at least one way. After midnight--and a few too many at Doug Fir, the Jupiter's alpine-style lounge--you can stumble upstairs for only $49. Just ask for the special Get a Room rate. 800 E. Burnside, 503/230-9200, jupiterhotel.com, normally from $79.  --Adrien Glover

Marfa was a dying west Texas ranching town, best known for being where the James Dean movie Giant was shot, when artist Donald Judd established the Chinati Foundation there in 1986. Hipsters have made the pilgrimage ever since, some even staying to open bookstores, art galleries, and cafés. Now there's a fitting place for arty types to crash when they make the trip: the Thunderbird. Last year, Liz Lambert--owner of the Hotel San Jose in Austin--coordinated a redesign of a 1959 former motor court on Highway 90. The result, open since January, could be described as Cowboy Zen. Each of the 24 minimalist rooms has cowhide rugs on smooth concrete floors. The Thunderbird's landscaping is similarly true to its Texan roots, with gravel, cacti, and horizontal lattices made of pipe salvaged from nearby oil fields. There's also a pool and an outdoor fireplace for the cold desert nights. 601 W. San Antonio, 432/729-1984, thunderbirdmarfa.com, from $79.  --Michael Hall

Four years ago, when Collins Avenue north of 14th Street began to crest as Miami Beach's hippest new district, a surfer named Eric Gabriel decided to get his feet wet in the motel business. He took over the slab-concrete Seadeck, a 1952 motel that had become a home for retirees. As part of his year-long renovation, Gabriel filled the 45 rooms with mid-century accessories like teak headboards. In name, the Aqua Hotel may have graduated from motel to hotel, but it still has telltale motel markers: It's two stories high, and you enter your room from the courtyard, where there's a pool-size hot tub and tropical garden. To enjoy it fully, snag one of the two sun beds--they're free, a rarity in Miami. 1530 Collins Ave., 305/538-4361, aquamiami.com, from $99.  --Jason Cochran

After buying the Lazy Meadow in 2002 as an investment, Kate Pierson of the B-52s restored the Catskills motor lodge. She created bright, cheerful rentals, put "Kate's" in front of the name, and reopened in May 2004. Work is still in progress on two of the units, but the finished seven are delightfully reminiscent of the motel's early-'50s glory days: The two-bedroom efficiencies even have matching turquoise or pink appliances and cupboards. "Every item was personally selected by Kate," says Monica Coleman, Pierson's partner in business and life. That includes the psychedelic mushroom ottoman, the 3-D nature murals, and the toiletries, which Pierson picked up during her years on the road. Rooms 7 and 8 also have a kitchen with a breakfast bar, a spiral staircase leading to the boudoir, a glass-walled shower for two, and a posse of good-spirited gnomes in the living room. Rehabbed Airstream trailers, down by the river, will be available for rent this summer. 5191 Rte. 28, 845/688-7200, lazymeadow.com, from $150, trailers from $125. --Carole Braden

While the working-class resort town of Wildwood has no shortage of motels in the kitschy architectural style known as Doo-Wop--think tiki torches and plastic palm trees--the Starlux Hotel is the first of the area's 200 mid-century lodgings to get a makeover. Owner Jack Morey, a Jersey Shore native, began a $1.1 million yearlong renovation of the Starlux starting in 2001, and in doing so, he spearheaded the beginning of a Doo-Wop preservation movement. Morey added a fourth floor to the three-story 1951 motel--formerly known as the Wingate--as well as a 16-suite wing and a glass-front lobby showcasing George Nelson saucer lamps and butterfly chairs. Rooms and suites are done in Jetsonesque decor, with modish accessories like lava lamps, but a funkier option is (again) two spruced-up silver Airstream trailers. 305 E. Rio Grande Ave., 609/522-7412, thestarlux.com, from $69. --Michelle Kleinsak

"Meltdowns? We had them daily," says Greg Henderson of the yearlong redo he and his partner, Joseph Massa, did on the Roxbury, a 1961 Catskills motor lodge. The two theater vets had a weekend home nearby, and in 2003 they used the 11-room Roxbury as an excuse to move permanently from New York City. Once a fleabag, the Roxbury is now a colorful clash of '60s and '70s mod by way of Ikea, the Container Store, and local auction houses. Each room has its own vivid color palette, and all have zebra-print sofas, pillow-top mattresses, DVD players, and retro lamps behind apple-green doors. If the whole gang's coming, book Inspiration Peaks, a mountaintop manor outside the neighboring town of Andes. The large home, which sleeps 10 (from $400 a night, two-night minimum), is also owned by the pair and is decorated in a similar style. 2258 County Hwy. 41, 607/326-7200, theroxburymotel.com, from $85.  --Carole Braden

The Austin Motel is proud of its flavor. so close yet so far out reads the flashing marquee outside the motel, which was built in 1938. After decades as a central-city motor court, the Austin--and the South Congress Avenue neighborhood where it's located--got a little down on its luck in the '80s. Things took a turn for the better in 1992, when Dottye Dean, daughter of the second owner, took over. She initially made small cosmetic changes (laying down new carpets and hanging fresh drapes), and then started tackling bigger projects in 1995. But Dean's still not done: "Renovations are ongoing and probably always will be as long as I am in charge," she says. Now, each room has a unique theme, from the kitschy (room 258's Monet Honeymoon wall mural) to the beyond (the original '60s lime-green-and-blue wallpaper in room 145, Polka Dot Surprise). The website includes images of all 41 rooms; scope them all out and book the one that suits you best. 1220 S. Congress Ave., 512/441-1157, austinmotel.com, from $52.  --Michael Hall

The 1954 motel now known as the Desert Star did some time in the '70s and '80s as condominiums, but Steve Samiof brought it back to its rent-by-the-night roots. The graphic artist moved into one of the condos in 2001. "When I saw the building, I fell in love," he said. Samiof bought six of the seven condos (one remains privately owned), renovated them one by one, and took his first booking the same year. The furniture reflects the mid-century aesthetic that reached its peak in the desert: reissued Nelson bubble lamps and Eames fiberglass chairs. But there are also 21st-century touches like large-screen TVs. Wooden accordion doors separate the spartan bedroom from the living area, which looks out on the central pool, giant cacti, and retro chaises. For all that, Samiof just sold the Desert Star--the new moteliers, Walter Popin and Davy Aker, promise not to make significant changes. 1611 Calle Palo Fierro, 760/778-1047, hopespringsresort.com, from $120.  --Celeste Moure

A few savvy chains are also bringing design within reach. Joie de Vivre, based in San Francisco, has juiced up two former motels. The Phoenix Hotel, long a grungy favorite with bands visiting town, underwent a revamp last summer. The Tenderloin location, however, will probably keep everyone but groupies away (800/738-7477, from $99). Much more family-friendly is Hotel del Sol, in the Marina--it's a 1998 conversion of a '50s motor lodge, now with bright yellow and green decor (800/738-7477, joiedevivre.com, from $129). Two years ago, Best Western overhauled the Capitol Skyline Hotel, a '60s relic in Washington, D.C., with neoclassical blue and gold leather furniture--that's it above (800/458-7500, bestwestern.com, from $99). And in December, the chain will put the finishing touches on the three-year renovation of its Hollywood Hills Hotel. Look for contemporary oak furniture and gray walls (800/287-1700, bestwestern.com, from $109). Finally, this month André Balazs opens his third Standard Hotel. It's in Miami Beach, and it's a conversion of a '50s motel-turned-spa originally designed by Morris Lapidus (305/673-1717, standardhotel.com, from $150).  --Jessica Shaw