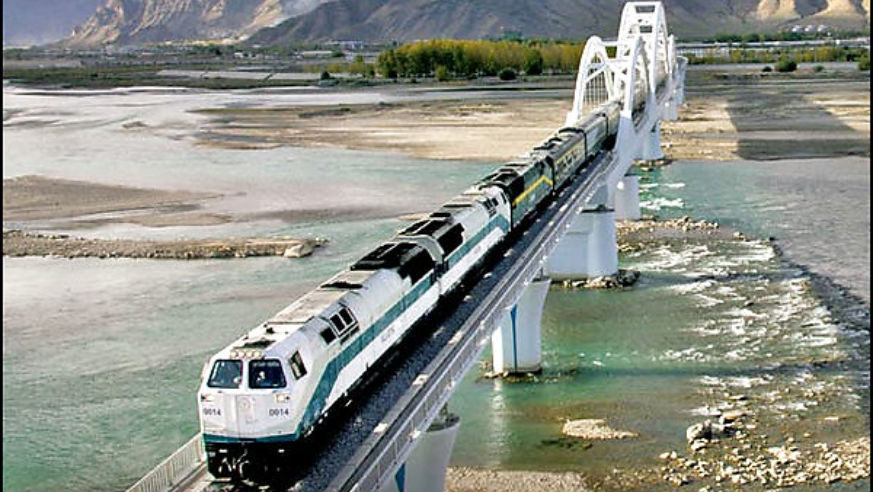 Like a railway to heaven, the highest train in the world cuts a stunning path from Beijing to Tibet&mdash;but the ride can be bumpy, as Allison Rupp discovers.

As the Sky Train departs Beijing West Railway Station at 9:30 p.m., there isn't an inch of unclaimed real estate in the train's 16 carriages. Suitcases spill into the aisles, doubling as chairs for passengers without seats. Boxes of scallion-flavored biscuits and cardboard bowls of instant noodles cover the faux-wood tables in each compartment. Farmers with weather-beaten faces keep watch over bulging bags of produce in the overhead racks, while young men smoke cigarettes and play cards as they squat in the tight spaces between carriages.

It's the night before China's October National Day, and close to 1,000 passengers are on the high-speed train bound for a place that was unreachable by rail until recently: Lhasa, Tibet. In the past seven years, the Chinese government has laid 710 miles of track across western China and the Tibetan plateau, creating the highest elevated railway ever built. At its tallest point, the Tanggula Pass near the China-Tibet border, the Sky Train climbs to 16,640 feet.

The Chinese have been obsessed with building a railroad to Tibet for decades--Chairman Mao first tried to link the two countries by rail in the 1950s, but the technology wasn't advanced enough to lay train tracks on Tibet's year-round permafrost. By the time the Sky Train finally made its inaugural, 48-hour trip from Beijing to Lhasa in July, China had spent $4.5 billion on rails that can withstand subzero temperatures and cabins that have the capability to pump in additional oxygen at high altitudes.

The lowest level of accommodations is simply an uncushioned seat. The most luxurious option, soft-sleeper class, has flat-screen TVs and four soft bunk beds (with down comforters) in each cabin. I'm in hard-sleeper class, which is considerably less private--the compartments don't have doors. Three wooden bunks are stacked on both sides of the cabin, so the person at the top has to sleep nose-to-ceiling. The space reminds me of a Beijing restaurant--drinking, smoking, and card playing go on all night. The life of the party, a young Chinese soldier in the bunk above me, shouts jokes long after the battery in my iPod dies.

The next morning, passengers stroll through the aisles in pajamas, making their way to the dining car. Breakfast consists of salty vegetables, porridge, and eggs for $3. Everyone slurps their porridge noisily, watching as cornfields appear and disappear. Chinese muzak blares over the speakers, including one song that ends with a voice cooing, "Happy birthday to you."

By midday, the train zips past the ancient city of Xi'an. A group of men in the dining car raise their glasses and toast with shouts of "Ganbei!" In my cabin, passengers crack sunflower seeds to pass the time, their shells spilling onto the carpet. Eventually, I make my way back to the dining car. "My parents forbade me from taking this trip," says a Chinese college student sipping soup across from me. "But I didn't care, because I had to see Tibet."

When the Sky Train reaches Golmud at dawn, I feel dizzy. The atmosphere on the Tibetan plateau has about 50 percent less oxygen than at sea level, and people pop altitude-sickness pills until the extra oxygen kicks in. As the train follows the shores of Qinghai Lake, craggy peaks surface across the vast frozen tundra. Herds of yak, their tails pointing straight out, graze in tall grasses studded with boulders. There are few people, a notable exception being a man who smiles at me as he relieves himself beside the tracks.

An hour before the train pulls into Lhasa, the crew passes through the cabin one last time, their souvenir carts stocked with carved combs and painted chopsticks. A Tibetan monk across the aisle from me pauses from his prayers to peer out the window as the lights of Lhasa finally come into focus.