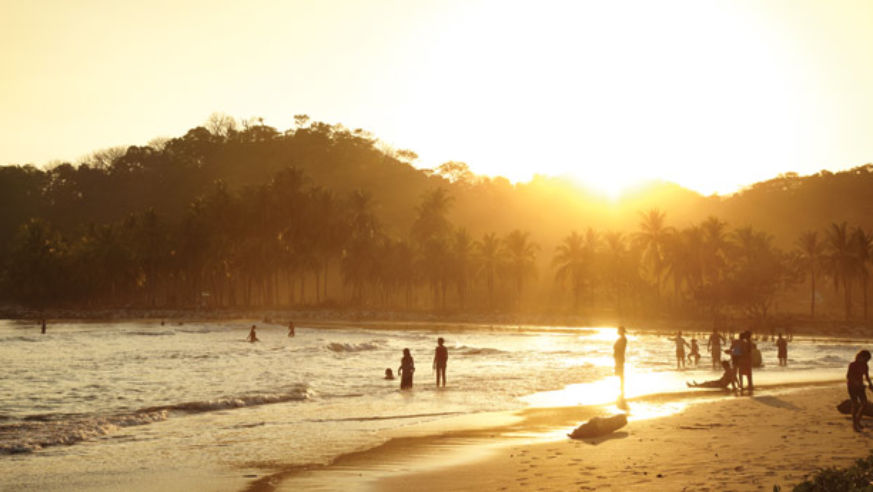 Despite the country's boom in tourism, S&aacute;mara, on the northwest coast, has managed to stay blissfully under the radar. For Costa Rica connoisseur Carolina A. Miranda, the laid-back town&mdash;and its made-for-beginners waves&mdash;is the perfect place to catch a break.

Surfing should be in my veins. I grew up in southern California, a few miles from the legendary breaks at Huntington Beach and Newport Beach, the sort of place where kids plan their lives around the morning surf report. But my early attempts were a profound bust. There was the afternoon camp in San Diego seven years ago, where a single harried teacher tended to eight students. (I spent almost the entire lesson waiting for my turn.) Then there was the overheated instructor in Mexico who encouraged me to find my balance by yelling, "Stand up!" at the top of his lungs (not the most effective technique). So when my friend Kathy asked me to join her at a school in Costa Rica, I was very ready to get up on my own two feet.

Most surf camps bundle a hotel and several days' worth of lessons into a preprogrammed package, but Kathy and I were looking for a more flexible experience. Our aim was to start with a single class, practice relentlessly, and then sign up for additional lessons as necessary—a DIY surf camp of sorts. And even though we sought the best experience, we didn't want to have to fight the hordes for every wave. Our search took us to Sámara, a village on Costa Rica's Nicoya Peninsula, on the country's northwest coast. A tiny town of about 1,000 people that's stretched out along the edge of a wide, jungle-fringed bay, Sámara is a rare throwback to a time when Costa Rica's beach towns were all about laid-back living, not all-night partying. Over the years, I've explored every inch of the country's coastline, and I was certain I didn't want to go to a place like Tamarindo, to the north, which starred in the 1994 Endless Summer sequel, or Nosara, one of the most common stops for vacationing surfers.

Sámara, on the other hand, has always had a hold on me. The roughly one dozen square blocks—sandwiched between a hilly range and the Pacific Ocean—are dotted with low-key inns and beach cottages. Howler monkeys bellow from the treetops, iguanas scuttle across dirt roads, and carefree young couples stroll along the uncrowded beach. Sure, it has the classic Costa Rican activities—kayaking, horseback riding, and watching sea turtles nest on the nearby beach of Ostional—but without the relentless soliciting that has become an unavoidable part of the travel experience in the country's more popular beach spots. Most important, it's also not a drag to get there: The town is at the end of a paved road (rare in these parts) that's accessible from both of Costa Rica's international airports. For me and Kathy, looking at a quick, five-day itinerary, that had real appeal.

Another draw was approachably tame waves. Sámara is on a protected bay and, unlike other parts of the coast, doesn't have powerful riptides or undertows. On any given day, you'll find native—and master rider—James Flores, 29, greeting friends on the sand. In addition to being the unofficial mayor of these parts, James teaches at Jesse's Sámara Surf School and Gym. The 10-year-old setup has a staff of eight English-speaking instructors and a one-to-one student-teacher ratio. James says proudly that he can get anyone to ride. "I've worked with 4-year-olds and 75-year-olds," he told us. "They all stood up on the board by the end of the day."

Kathy and I planned to spend most of our time on the beach, but our B&B, the Hotel Entre Dos Aguas, was a pretty sweet place to recoup at day's end. Set on a forested hillside three blocks from the water, the hotel has a pool and a manicured garden; the location, away from the beachside bars and restaurants, ensured us a respite from the random truck driving down the main drag. Run by Brandon and Lilah Park, transplanted 30-something New Yorkers, the chalet-style building has seven whitewashed rooms accented with driftwood shelves, linens in primary colors, and stone showers.

On our first morning, Kathy and I fortified with a pre-surf breakfast on the Dos Aguas terrace: scrambled eggs, house-made granola, fresh papaya, and steaming Costa Rican coffee from beans grown in the Central Valley. At 8:30 a.m., we reported to the surf shop, about a 15-minute walk from the hotel along the broad, brown-sand beach. Kathy and I got sized up for boards and rash guards (the thin Lycra surf shirts that protect your skin from the elements), and we listened to a safety discussion. Then James laid out a pair of foam longboards on the sand and walked us through how to get from our bellies (paddling position) to the bent-knee stance. Rather than pop up in a single move (the point at which most beginners topple), we were to take a series of deliberate steps: Push up onto hands, slip the left foot forward, pivot the right foot down, lift hands. Voilà, you're Laird Hamilton! James also marked the boards to show us where our various body parts should go, a simple step that proved inordinately helpful.

Once we were in the water, our teachers launched us into the waves so our timing would be just right. No matter how much we floundered, James kept up the encouragement. And, sure enough, before the lesson was half over, Kathy and I both managed to rise and ride a swell—and, yes, we were totally stoked. For the next four days, we returned to Jesse's to rent boards and hit the break in front of the shop as often as the tides allowed (at least twice a day). James always managed to pop by to give us complimentary pointers and help us refine our skills.

For all the effort we exerted in the water, Sámara was the kind of place that made me feel utterly entitled to relax. Kathy and I spent our non-surfing time lounging by our hotel's shaded pool, chatting and reading books that had been stacking up for months. In the evenings, we ambled over to what had quickly become our favorite open-air beachside barbecue joint, El Lagarto, and worked our way through the menu. The tender-to-the-bone grilled chicken figures into several dishes, always accompanied by simple, fresh salads and (for us, at least) ice-cold Imperials, the local lager.

Our last day in town, we were intent on getting in as much wave riding as possible. Since we got to the beach a little late at 10 a.m., we remained in the water for hours and hours. As the sun started to set, we were still holding strong. Sitting on our bobbing boards, we looked back at the shore and saw the dark-green jungle illuminated by a brilliant orange light. I may have had to leave California to learn how to surf, but it was clear I'd chosen the right spot.