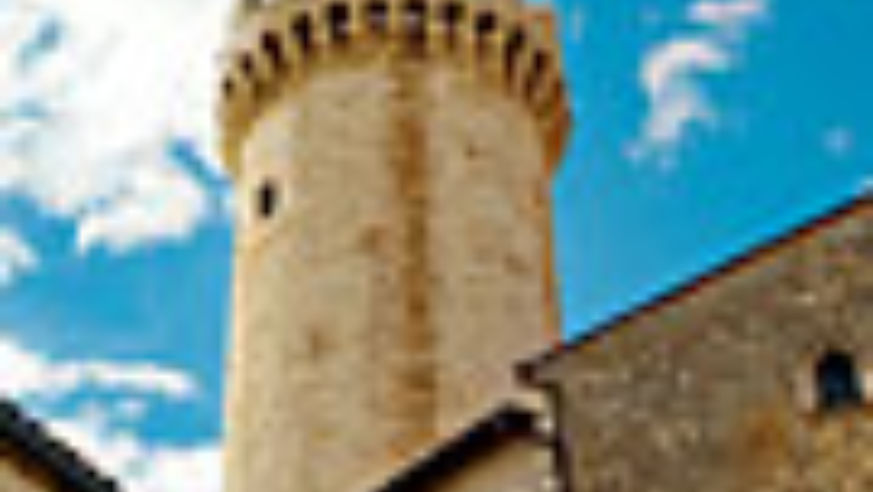 Ancient Italian villages are being turned into a new kind of hotel, where the rooms are spread out across town and you share the streets with residents. One of the best of these alberghi diffusi is Sextantio, in the Abruzzi mountains.

On the day he found Santo Stefano di Sessanio, the ancient Italian village that would change his life, Daniele Kihlgren was lost. He had set out on his motorcycle to explore the Abruzzi mountains, two hours east of Rome, and was trying to locate a back road from the ruins of a medieval castle to a gorgeous high Alpine plain known as the Campo Imperatore. Instead, he stumbled across a tiny fortified town of narrow alleyways and crumbling stone buildings.

Santo Stefano reached a peak population of around 3,000 in the 16th century, when it was a thriving way station on the Medici wool-trade route. In the 20th century, however, it went the way of countless other central and southern Italian hill towns: a long postindustrial-era decline followed by a mass exodus of residents seeking a better life in big cities or abroad after World War II. By the time Daniele arrived on his motorcycle in 1999, there were only about 120 residents left. "There were no cement buildings, no industrial warehouses, none of the Swiss-style tourist chalets that blight so many historic Abruzzesi towns," says Daniele. "It was just this stone village."

Not many people would look at a dying town—some former homes were just piles of rubble, others had caved-in walls and no roofs—and think, This would make a great hotel. But Daniele, now 41, saw an opportunity to rebuild Santo Stefano and breathe new life into the local economy by transforming many of the abandoned houses into an albergo diffuso, or "diffuse hotel."

This new type of hotel is probably the closest travelers can come to living like a local in Italy. You stay in apartments or rooms in renovated houses that sit next to buildings still occupied by residents, "inserting yourself into a town and becoming part of it temporarily," says Giovanni Pacifico, the site manager for Daniele's hotel, Sextantio il Albergo Diffuso. Tourism, in turn, gives a boost to the local economy—but in a way that sustains the residents' way of life instead of trampling it.

Santo Stefano di Sessanio has a spare, carved-from-the-mountain look that comes from using the same limestone to pave the streets and to build the houses. The town is the kind of place where everyone greets each other on the streets with a "Buon giorno!" and no one locks his door. (The hotel gives six-inch skeleton keys to guests, but only, Giovanni says, because it makes them feel more comfortable.)

Daniele's goal was to pay tribute to the age-old traditions of the region's people—historically some of the poorest in Italy—by rebuilding the town in exactly the same way that it had existed for centuries. He first had to track down the descendants of the owners of the abandoned homes to buy the properties—a process that took two years. In many cases, the families had been in the U.S., Canada, or France for generations and were unaware they had inherited property in Italy. Then, Daniele's team consulted museums devoted to local traditions and ­furnishings and scoured the area for door frames, hinges, shelving, and other materials. Homes were restored one by one.

"Many operations erase the local heritage to start anew," says Daniele. "We use arte povera (peasant style) furnishings and architectural elements, even if they're a bit beaten up, because it's conserving part of the material culture of the region."

Each of the 32 guest quarters at Sextantio—which start at $252 per night for a double—is unique. Some are simply furnished, with stone walls and small windows that let in little light. The more ornate rooms have centuries-old painted wood ceilings and working fireplaces. Six units in a modest palazzo on the main square share a small loggia on the upper floor with countryside views. One of the palazzo's ground-floor bedrooms was originally used as a stall for livestock (keeping the sheep, pigs, and chickens below the house helped warm the rooms above).

The decor is largely limited to antiques like armoires, cupboards, dressers, and a few oddball found objects: an altar railing leaning against a wall, an old saddle casually draped over a sawhorse, ancient spinning trestles, and iron farm implements. The developers constructed each bed by laying a plank across iron sawhorses and topping it with a hand-stuffed mattress. The beds are raised high off the ground, just as they were for hundreds of years when chamber pots were stored underneath. Every room also contains a cassapanca, a hope chest that has long been the most important piece of furniture in Italian households. The staff leaves a complimentary bottle of basil liqueur on the chest for guests.

Giovanni proudly points out that the builders attached the thick wooden doors to the frames using hand-cut nails and a weaver made the sheets and bedspreads on looms after interviewing local women about their traditional patterns and uses of the textiles.

Because few guests would be inclined to use a chamber pot, however, Daniele made a few allowances for modern amenities. He added bathrooms in some homes and outfitted them with Philippe Starck–designed toilets and oversize showerheads. In other houses, he wedged the toilet and the bathtub behind a new wall or screen in the bedrooms because he couldn't build an adjoining room without altering the structure of the buildings.

The builders also tore up the original floors—many of which were in terrible condition—and installed electrical wiring, fiber-optic cables, and radiant heating before replacing the floors with period-appropriate terra-cotta tiles, or chestnut or spruce planks. They put all of the wiring and heating in the floors to avoid drilling into the walls, which have been blackened over the years by the smoke from fireplaces—a feature Daniele wanted to retain. His lighting choices are likewise subtle: a single halogen light aimed to reflect off a gold-leafed disk on the wall, or a light nestled amid a cluster of glass globes arranged on a table like grapes. There are no TVs, telephones, or minibars in the rooms.

Although the majority of the guests are from outside the country, Daniele says about 30 percent are Italians who are "nostalgic for the Italy of 30 years ago." One woman who grew up poor in the region told him: "You gave dignity to something I was always taught to be ashamed of."

Sextantio's commitment to the past extends to its restaurant, which was built in an abandoned room within the town's 16th-century defensive walls. The restaurant has been run since last spring by Niko Romito, a self-taught local chef whose restaurant in southern Abruzzi, Ristorante Reale, has earned a Michelin star. Niko, who was looking for new opportunities, jumped at the chance to work at Sextantio when Daniele told him he wanted to revive traditional Abruzzesi recipes.

The $63 prix fixe dinner begins with a flute of spumante (Italian sparkling wine) and a bottle of Montepulciano d'Abruzzo red wine. For the antipasto course, there are three kinds of salami and prosciutto (all made in-house), a small bowl of zucchini soup, aged and fresh pecorino cheese, a dollop of fresh ricotta and grape marmalade, and irresistable tiny fried pizzette puffs topped with thin slices of sharp pecorino.

Then comes a trio of first courses: bruschetta with a soup of lenticchie (tiny mountain lentils), farro (a barley-like grain) with mushrooms and saffron, and homemade chitarrini, a kind of square spaghetti that's hand cut with an implement called a chitarra (Italian for "guitar")—a rack with closely spaced wires the chef presses down on a sheet of dough. The second course is grilled lamb with roasted potatoes, red peppers, and a salad on the side. And for dessert, Niko serves sliced strawberries and a saffron-flavored ricotta meringue with a glass of bitter digestivo di genziana, a liquor made from the roots of a local herb.

The menu may change to include other fare as Daniele and Niko learn more about the food of the region. But Daniele stresses that the restaurant will only serve dishes using ingredients that people in the area have survived on for centuries. "The dishes are tied to the most practical needs of a population that had to grow whatever they ate," he says.

Although he was careful to consult residents about how best to represent their traditions in everything from the decor to the recipes in the restaurant, Daniele could easily have been branded a carpetbagger and run out of town. "I lived in fear that I would come off as a neocolonialist," says Daniele, who is half-Swedish and half-Sicilian and was raised in Milan. "But because I empowered the people to rediscover their heritage, they soon got behind the project"—even if some grumbled about how many newspapers ran stories giving the impression that Daniele had "refounded" the town by opening the hotel.

Sextantio has brought many benefits to Santo Stefano, though. Giovanni says that before the hotel opened, local night­life consisted of "just the little bar on the square and an osteria for the priest." Now, Santo Stefano has seven restaurants, three bars, and a half-dozen B&Bs, inns, and agriturismi (farms that welcome tourists). The town has become a base for people to explore the surrounding Gran Sasso National Park. What's more, property values have increased fivefold.

For some, the temptation might be to build even bigger, but Daniele is happy with the size of Sextantio. He's also helped the area government implement a plan for sustainable tourism development to protect the character of the region. His next major goals go beyond Santo Stefano, and he's started work on alberghi diffusi in six other nearly abandoned towns in the Abruzzi, Molise, and Basilicata regions along Italy's mountainous spine and in the rural south.

Daniele and his team have made the most headway on a project in Matera, a city in Basilicata that was built more than two millennia ago in a deep ravine honeycombed with caves that are called i sassi in Italian. People lived in the caves for hundreds of years until authorities relocated the population to a modern city on a plateau next to the ravine in the mid-1900s. In recent years, however, the government has poured money into restoring the cave homes to make them livable again, in part as an effort to draw tourists. And people have begun moving into the caves as they have been linked to the electrical grid.

Daniele is renovating several homes to open as a hotel this year. Most rooms still retain the tufa walls of the caves and have little in the way of natural light beyond the first room. "They might be far from the canon of what's considered beautiful in Italy," says Daniele of places like Santo Stefano and Matera. "But ever since I was a child, I thought this was a beautiful and worthy part of the country."

And in the next issue of BT...

We'll be spotlighting five ancient villages in Italy that have been turned completely into amazing hotels.