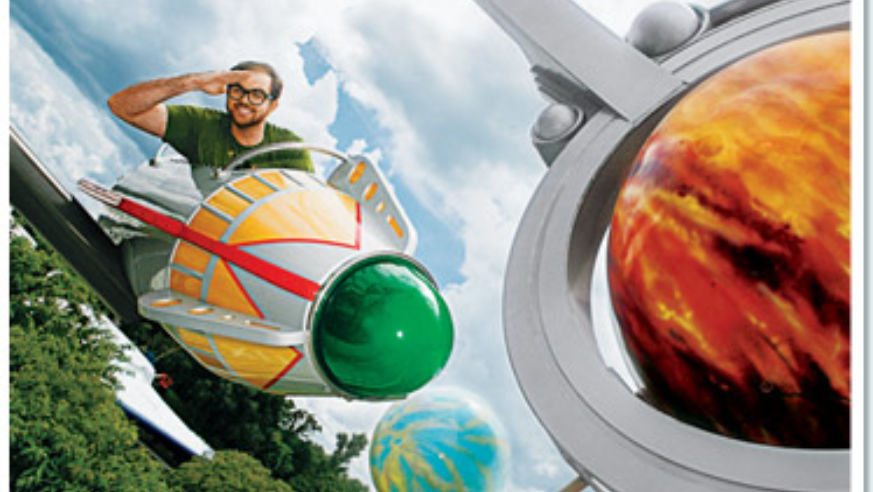 Magic Kingdom's Astro Orbiter, which takes in some of the park's best views

An insider manual to Disney World for first-timers and fanatics alike.

If there's such a thing as an archetypal Disney fanatic, I'm pretty sure that I don't fit the mold. I don't own Mickey Mouse T-shirts or have a Disney license plate on my car. There are no movie posters, bobblehead dolls, or other assorted Disneyana decorating my cubicle. But as hard as it is for my colleagues at Budget Travel to believe, I've been to Walt Disney World more times than I can count. In fact, when my family and I try to tally the total number of days we've logged in the parks, we usually start with some complex mental math only to throw up our hands and agree, "A few hundred."

Having grown up in Tampa, about an hour from Disney World, I've had some of my most memorable life experiences with Mickey and the gang. Disney World is where my fourth-grade science class went on a field trip to learn about marine biology, where my elementary school chorus performed Christmas carols, where I've spent countless New Year's Eves, Fourths of July, Labor Days, and Memorial Days. I even learned I was accepted into journalism school, from an e-mail sent to my smartphone, while riding in a simulated hang glider at Epcot's popular Soarin' attraction.

So I guess you could say I know the place pretty well. Add in my family (mother, father, and sister), and we've collectively amassed more than 60 years of park experience. With that kind of dedication comes a little embarrassment and a lifetime's worth of invaluable rules. What follows is my hard-won Disney World wisdom, an insider's manual for first-timers and fanatics alike.

1. Embrace your impulsive side
Disney World's sheer scale can be daunting: four theme parks, 25,000 acres, nearly 500 places to eat, more than 28,000 hotel rooms. Guidebooks often suggest creating a master multiday game plan before hitting the parks. I totally disagree. Rather than sticking to a rigid agenda, my family has developed a simple system: Check the morning forecast. If rain is on the way, we head for Hollywood Studios—it's far and away the most compact of the four parks, and almost all rides and lines are indoors or sheltered. Cloudy days are ideal for Animal Kingdom, since the big cats, great apes, and Serengeti grazers are much more active when the sun is hidden, while Epcot is a must when the mercury is predicted to climb above 90 degrees; many of its top attractions clock in at over 15 minutes, maximizing your precious air-conditioned hours. And for those perfectly sunny days? Magic Kingdom, of course. Blue skies are ideal for carnival-style rides like Dumbo the Flying Elephant and Big Thunder Mountain Railroad—not to mention that classic family photo in front of Cinderella Castle.

2. Don't even think about paying for parking
When you're shelling out $90 a day for admission, tacking on another $14 for parking can feel like adding insult to injury. I'm proud to say my family hasn't paid for a spot in years. What many out-of-towners don't realize is that the parking lots at Disney water parks, miniature-golf courses, and the Downtown Disney entertainment district are absolutely free. From those locations, shuttle buses will take you wherever you need to go (note that some routes require transfers). Our all-time favorite spot is an unmarked overflow lot across the street from the BoardWalk Inn. Next to a Hess gas station, the lot is almost always half-empty and is a 10-minute walk to the resort. From there, you can stroll over to Epcot, take a ferry ride to Hollywood Studios, or catch a shuttle bus anywhere else—all free of charge.

3. Ready, set...run!
If you've been to Disney World even once, you probably know that Fastpasses are the single-greatest time-savers ever. They are distributed from special machines at many popular rides, and they specify a time window (essentially a reservation) when you can return and skip the line. The only hitch is that they're limited and first-come, first-served. Every December 26, my family visits the Magic Kingdom with a large group from our neighborhood. To ensure that we all get Fastpasses, our family friend, a special-projects manager at a major computer company, uses his logistics skills to coordinate what I call the "running man" strategy. Because favorites like Space Mountain and Splash Mountain are located far from the entrance, it would be impossible to get our whole party to the Fastpass machines before the best time slots were taken. Instead, we send the fastest member of our pack bobbing and weaving through the crowds to collect passes for everyone.

4. Look beyond the biggies
With top rides like Hollywood Studios' Twilight Zone Tower of Terror (an intense free fall) and Epcot's Mission: Space (a thrilling virtual space flight) commanding hour-long waits, it pays to go where the action isn't. Epcot's Sum of All Thrills is no less exciting than Mission: Space, but for whatever reason, I've never waited more than 15 minutes for it. On a touch screen, guests design their own roller coaster, bobsled course, or jet flight, and then step inside a two-person module on the end of a robotic arm to experience a simulated version of their creation. Another inexplicably empty attraction is Magic Kingdom's Tom Sawyer Island. The 3.3-acre site is a warren of wooded trails, caves, and circa-1840s buildings. Each morning, staffers hide six paintbrushes on the island, and the first kids to find them get front-of-the-line passes for Big Thunder Mountain Railroad or Splash Mountain.

5. Drink for free—in eight languages
Disney World isn't exactly known for its giveaways—which is why Epcot's Coca-Cola-sponsored Club Cool is such a score. Located in a nondescript storefront behind Epcot's silver geodesic sphere, Club Cool doles out free samples of eight soft drinks from around the world, including Costa Rican Fanta Kolita, Israeli Kinley Lemon, and Japanese VegitaBeta. Just beware the bitter and syrupy Italian (nonalcoholic) aperitif known as Beverly. It's a doozy.

6. Grab some shut-eye (and a quick history lesson)
During summer's peak, when the Magic Kingdom can stay open as late as 2 a.m., the conventional wisdom is to return to your hotel for a refreshing afternoon catnap or a cooldown by the pool. But really, there's no need to leave the park. My apologies to the Hall of Presidents—Disney's audio-animatronic celebration of the American presidency—but there's no better place for a quick midday snooze. Comfy seats, a long running time (23 minutes), perfect air-conditioned temperatures, and Morgan Freeman's warm narration make for a dreamy combination.

7. Look at the line. Now skip it
Trying to fit all the highlights of a given park into a single day can feel like a race against the clock, so every little time-saver helps. At Rock 'n' Roller Coaster (Hollywood Studios), Test Track (Epcot), and Expedition Everest (Animal Kingdom), riders have the option of queuing up in a dedicated singles line to fill any empty seats that might open up between larger parties. Sure, you won't be able to buy the requisite cheesy souvenir photo of you and your family screaming your heads off, but you'll halve that hour-plus wait time. Multi-kid families have another option, called the rider switch. If one of the kids is too young, short, or scared to ride, one parent-child pair can enjoy the attraction while the other waits by the loading zone. When the riders finish up, the parents can swap positions and the new parent-child team sets off for another run—no extra waiting involved.

8. Squeeze in time for cocktail hour
At a certain point in every young Floridian's life, Epcot graduates from "the educational theme park" to "the park where you can drink your way around the world." Everything from Chinese green-tea plum-wine slushies ($7.50) to icy, blended French Grey Goose citron cocktails ($9) is available in the grab-and-go bars that ring Epcot's World Showcase Lagoon. Sure, these drinks are delicious, but there's an even better alternative. For those unconcerned with trying to hit every attraction before the park closes, I suggest setting some time aside to duck into La Cava del Tequila, hidden inside Epcot's Mexico Pavilion. With only 30 seats, the grotto-like restaurant is an unexpectedly intimate shelter from the bustle outside and serves some mean specialties like flavored margaritas (avocado, cactus, jalapeño, and hibiscus), house-made guacamole, small plates like blue crab tostadas, and flights of top-shelf tequila (margaritas from $10, small plates from $6).

9. Buy a souvenir you'll actually want
For years, the most popular souvenirs at Disney World were hyper-collectible but decidedly uncool pins. (That didn't stop me from gathering them by the hundreds.) But now Disney has gone and added a twist: It's introduced a line of souvenirs that are at once cartoonish, crowd-pleasing, and surprisingly hip. With their trademark Mickey Mouse ears, the three-inch-tall Vinylmation figurines (from $10) come in hundreds of designs. You'll find everything from classic characters like Goofy and Pluto to iconic attractions like the monorail and Cinderella Castle. The catch? These pop-art-inspired action figures are sold in unmarked boxes, so you never know which pattern you'll find inside. If you're unhappy with your randomly selected design, most stores keep three options in full view by the cash register, and you can swap yours for one of those backups.

10. Don't skimp on your hotel. I promise you'll regret it
Most people are quick to think you'll get the best hotel deals outside the parks. And while that's probably true—a $35 room on congested International Drive is not unheard of—value-oriented visitors should not rule out Disney resorts. For example, the All-Star (Music, Sports, and Movies—three separate hotels) and Pop Century resorts are just minutes from the parks via Disney buses, and they start at $82 a night (make reservations at disneyworld.disney.go.com/resorts). Each is outfitted with oversize props that suit their respective themes. Think 51-foot-tall tennis rackets, a guitar-shaped pool, and pop culture figures like Mr. Potato Head and Pac-Man. If all of this overblown theming comes off a bit kitschy, Port Orleans (from $149) and Coronado Springs (from $154) offer more subtle experiences inspired by New Orleans and the American Southwest. Whichever you choose, I recommend you embrace it—along with your inner kid. At Disney, that's kinda the point.