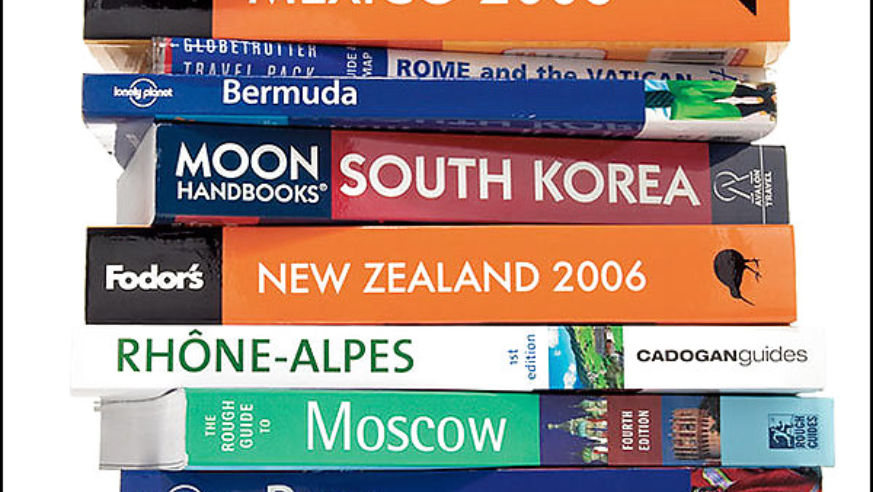 We've all felt baffled about which guidebook we should buy. Zora O'Neill, who writes for Moon and Rough Guides, asked fellow authors how travelers can find the best fit

Rule out obvious mismatches right away. The student authors at Let's Go, for example, won't have the time or budget to ferret out boutique hotels. If you're unsure of a brand's slant, scan the guide to your hometown--or a town you know particularly well--and note what kind of restaurants, hotels, and activities receive glowing reviews. But finding a brand you're comfortable with is only the first step. "Individual books within a particular series can vary enormously in quality," warns Gordon McLachlan, author of The Rough Guide to Germany.

Maxine Cass, who has written for Thomas Cook Publishing and The Globe Pequot Press, immediately flips to a guide's copyright info. It's usually facing the title page, though sometimes publishers hide it near the back. Cass says that chances are a book that's just appeared on bookshelves "is already a year out of date," because of the time involved in editing and printing. You don't want a guide staler than that. Check to see if something monumental from recent years, such as a major hurricane or political shift, is mentioned in the text.

Authors are typically paid advances that are barely enough to cover travel expenses involved in a first edition. Consequently, opinions are often formed after quick, even perfunctory, visits. As they write subsequent editions, authors have more time to make keener judgments. "It's impossible to research everything fully the first time," admits McLachlan. "A really authoritative guide will have gone through at least a couple of previous editions."

You also don't want a 14th edition with material that's changed only slightly over two decades. At first glance, it's difficult to tell if a book's been revised properly. Robert Reid, a Brooklyn-based writer who has updated a dozen books for Lonely Planet, recommends investigating older editions at the library. Reid says that "identical hotel listings for Calgary in four straight editions" indicate that the writer might be lazy.

When choosing between a guide that covers an entire country and a title devoted to a single region or city, opt for the more specific one as long as it makes sense with your itinerary. "The greater the area the book tries to cover, the more superficial the information," says Thomas Kohnstamm, who writes about Latin America and the Caribbean for Lonely Planet. For instance, Moon Handbooks' 334-page Acapulco guide obviously has more information about the beach resort than Fodor's Mexico 2006, a guide for the entire country that has 41 pages focused on Acapulco.

Look at the bio and sample passages of text for signs that the writer has knowledge and experience in the destination. Scan for indications that the writer is interested in the stuff that interests you. Kohnstamm says that when going to Montreal to check out nightlife, "the last thing I want is a book written by a middle-aged expert on Quebecois museums. You can also learn a lot by reading section introductions, seeing what they focus on, and comparing them to the detail in reviews." Categories that lack color are probably not the writer's forte.

Publishers want readers to have confidence in their writers, so a bio should point out, say, if the writer has a master's degree in French literature or is published regularly in major newspapers and magazines. Read the bio closely, and also think about what's absent. If the bio is all fluff--or worse, nonexistent--that's not a good sign. The back page of Access Philadelphia lists the name of the writer and researcher for the sixth edition, but nowhere in the book is there information about who she is, what qualifies her, or who wrote the previous five editions.

While a resident author may seem ideal, Janet Groene, who writes for the Open Road series, often prefers a traveler's perspective. "Locals never stay in hotels," she points out, "and they're often so caught up in local politics and gossip they miss the forest for the trees." On the other hand, residents tend to do a better job of unearthing obscure nooks and hidden gems in big cities.

"Maps should be plentiful and labeled with what's relevant, not half another country to fill space," says Cass. The symbols and type should be easy to read--some maps inside Globetrotter's guide to Rome and the Vatican have tiny lettering, and lots of it (see left). Compare similar maps in a few guidebooks to find a level of detail with which you're comfortable. Think about how you'll be using the book: Colorful, out-of-scale maps drawn by artists will be of limited assistance if you're going on a road trip. Instead, you'll be better off with maps that contain major and secondary roads, city close-ups that show which streets are one-ways, and mileages between destinations. Or figure on buying a good road map as a supplement.

Browse a book's index to get an overall sense of how thorough it is. Look in particular for topics that are important to you. Lonely Planet's Bermuda guide, for instance, has nothing listed in the index under movies, cinema, film, or theater (even though the book itself cites three spots screening movies).

Because it's difficult to tell how sensibly a guide is organized until you're actually on your vacation trying to use it, Bethany Ericson, the author of New England Cabins & Cottages, suggests doing a little hypothetical role-playing before you make a selection in the bookstore. "Think about a place you know you want to visit and then go to that chapter," she says. "Now pretend that you're hungry or tired, or want to go to some cultural festival or back to the hotel. How easy is the book to use?"