This weekend: Fly high in Branson, Mo., with a new airport and air show 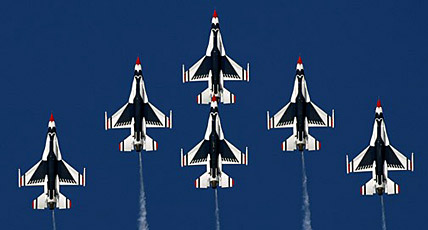 Branson, Mo., receives 8 million visitors a year, who are drawn to its more than 50 theaters and 100 live shows. But getting there isn't easy. Located in southern Missouri, Branson's closest airport has been Springfield, Mo.—about an hour away.

Thankfully, on Monday, a $155-million airport opens in Branson. (Fun fact: It's the first commercial airport in the country to be financed, built, and operated privately.)

To celebrate, Branson is hosting its first-ever air show, with performances by the elite U.S. Air Force Thunderbirds, a collection of F-16s whose pilots execute 30 high-flying maneuvers in one show—including a six-plane formation that's so close you'll hold your breath.

The US Army Golden Knights and the Aeroshell Aerobatic Team, among many others, will also perform. The show starts Friday night, with events scheduled through Sunday. Besides fantastic displays of aerial wizardry in the sky, there will also be historic aircraft on display.

The Branson Airport officially opens on Monday, with a 7,140-foot runway and a terminal with four gates. AirTran and Sun Country will provide service from cities like Atlanta, Dallas, and Milwaukee (Airfarewatchdog.com spotted a $129 round-trip flight between Dallas and Branson). Read more about the airport on msnbc.com.

For more info on all of Branson's year-round shows and activities, visit its official website.

This Sunday, the Vatican Museums are opening their doors and donating all admission fees to families left homeless by the 6.3 magnitude earthquake that rocked Abruzzo, a region northeast of Rome, on April 6. Museum staff will donate their salaries for the day and admit visitors from 9 a.m. until 12:30 p.m., with a 2 p.m. close. Admission is &euro;14 ($18.60) for adults. The museums are typically closed on Sundays, except for the final Sunday of each month when they're free. Pope Benedict XVI visited Abruzzo at end of April. His stops included a shattered medieval basilica near L'Aquila and the tents that have sprung up around the devastated town of Onna, where he offered hugs, prayers, and promises.

Open for only a handful of weeks, Frenchie is a bistro worth checking out. The fact that I've allowed a full six days to pass since my last meal there is a source of deep and personal regret. I love its location on a tiny street at the very top of market street rue Montorgueil. I love the d&eacute;cor&mdash;exposed stone and brick, with timbered ceilings and chic industrial lighting. I love the friendly chef&mdash;the namesake frenchie who probably earned that nickname during stints at New York's Gramercy Tavern and with Jamie Oliver in London. Most of all, I love the inspired, careful and altogether delicious food. The menuShort and seasonal carte changes daily based on what's best at the market. Only two to three choices for each course, but every one of the available options looked delicious. Star starters during my visit included truite fum&eacute;e, asperges (house smoked trout with green, purple and wild asparagus) and salade tomates cerises&mdash;a revelatory mix of heirloom tomatoes, baby basil, cherries, and white balsamic. The winning main was canard au miel carottes aux epices fenouil&mdash;a honeyed duck breast whose sweetness was balanced by shaved fennel and spicy carrots. For dessert, I passed on pavlova and went for tarte au chocolate amer, caramel au beurre sale&mdash;bitter chocolate tart with salted butter caramel. To say this was 'rich' would be an understatement. The bill At dinner, the prix fixe is &euro;27 ($37) for two courses and &euro;33 ($45) for three. Sharing two nice bottles between six people, our final tally was &euro;42 ($57) per person for three courses plus wine. Less expensive wines are available by the carafe, and the lunchtime menu is cheaper at &euro;16/19 ($22/26) for two or three courses. The buzz It's mainly French press at this point, but (English-language food blogger) John Talbott clocked an early and adoring review. En fran&ccedil;ais, Le Fooding loved Frenchie, as did Le Figaro, L'Express, and blogger Chrisoscope. The coordinates 5, rue du Nil, 2nd arrondissement, 011-33/1-40-39-96-19. M&eacute;tro Sentier. Closed all day Sunday and Monday, and Tuesday at lunch. MORE FROM OUR PARIS BLOGGER Slimming down the lunch bill at Paris restaurants (10-plus comments) Practical Paris: What's closed on Sundays, Mondays, and Tuesdays?

Nantucket, an island in the Atlantic lying 30 miles off the coast of Cape Cod, Mass., has a remarkable maritime heritage. There have been more than 700 shipwrecks off of its shores (earning the island the dour nickname "a graveyard of the Atlantic.") Just off a $3 million renovation and expansion, the Nantucket Shipwreck &amp; Lifesaving Museum will reopen this weekend. The museum's collection houses more than 5,000 objects&mdash;vintage photographs, period lifesaving and boating equipment, and the only surviving Beach Cart (think of it as a modern-day ambulance). Plus the museum posts on its walls harrowing tales of some of the area's most famous shipwrecks&mdash;like the Great Gale of 1879, when 68 vessels wound up wrecked on the shore. New this season is a retrospective exhibit on Madaket Millie, a local heroine who performed patrols of Madaket Harbor so faithfully that she was named an honorary officer in the U.S. Coast Guard for her life-saving efforts. Open through Oct. 12, 2009. Admission is $5. Call 508/228-1885 for more details.