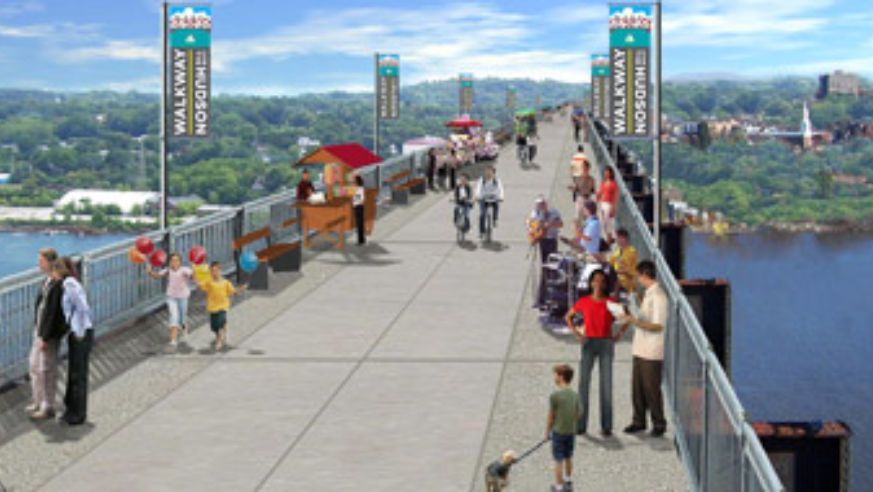 Courtesy Walkway Over the Hudson

If you thought New York City'sHigh Line was an impressive reinvention of a former elevated rail line as a public strolling ground, wait until you see the Walkway Over the Hudson, opening Saturday.

The 120-year-old Poughkeepsie-Highland Railroad Bridge has been transformed into a 1.25-mile-long pedestrian park—the world's longest bridge of its kind—linking the city of Poughkeepsie and the town of Lloyd in New York.

Whereas the High Line offers respite a leisurely 30 feet from the ground, the Walkway Over the Hudson looms 212 feet above the water, offering stunning views of the Hudson River valley to walkers, runners, and bicyclists alike.

Officially a state historic park, the walkway has also been named a National Recreation Trail and will eventually connect to 27 miles of rail trails and riverfront parks, much of which will be completed next year.

Opening weekend events begin with Friday night's Grand Illumination, in which 1,000 volunteers will carry paper sky lanterns in a promenade across the bridge, illuminating it for the first time, and then release the self-extinguishing lights into the sky, followed by a fireworks display. The walkway will not yet be open to the public, but anyone can view the illumination from Waryas Park in Poughkeepsie and across the river at Oakes Road in Highland (a hamlet in Lloyd). (Check out the events Webpage.)

Saturday starts with a re-creation on the river of the famed Poughkeepsie Regatta, hosted by nearby Marist College's crew team. Other activities include music and folk art festivals and river cruises in Waryas Park and the Highland HudsonFest. Also in Waryas Park and in Highland, large screens will broadcast the day's early events from the walkway—including official grand opening ceremony remarks by New York Gov. David Paterson, a parade across the bridge of puppets signifying the flora and fauna and history and culture of the Hudson Valley, and an Old Rhinebeck Aerodrome biplane flyover—until 3 p.m. when the bridge officially opens to the public. That evening, visitors to the bridge are encouraged to don glow-in-the-dark clothing and accessories (break out the glow sticks!) as part of a night circus and light show. The events spill over into Sunday, when the walkway will be open 8 a.m. to 7 p.m.

The bridge is within walking distance of Poughkeepsie's train station, accessible from NYC and from any city with an Amtrak connection. For this weekend's events, check walkway.org for parking and shuttle bus information.

The opening is part of New York's Hudson-Fulton-Champlain Quadricentennial celebration commemorating the 400th anniversaries of the voyages of Henry Hudson and Samuel de Champlain, and the 200th anniversary of Robert Fulton's spearheading the first long-distance steamboat trip, which traveled up the Hudson River.

The bridge was the longest in the world when it opened, and at one point 3,500 train cars crossed it daily, but a 1974 fire shut the tracks down for good. Repurposing the bridge for public use has been a project 17 years in the making.