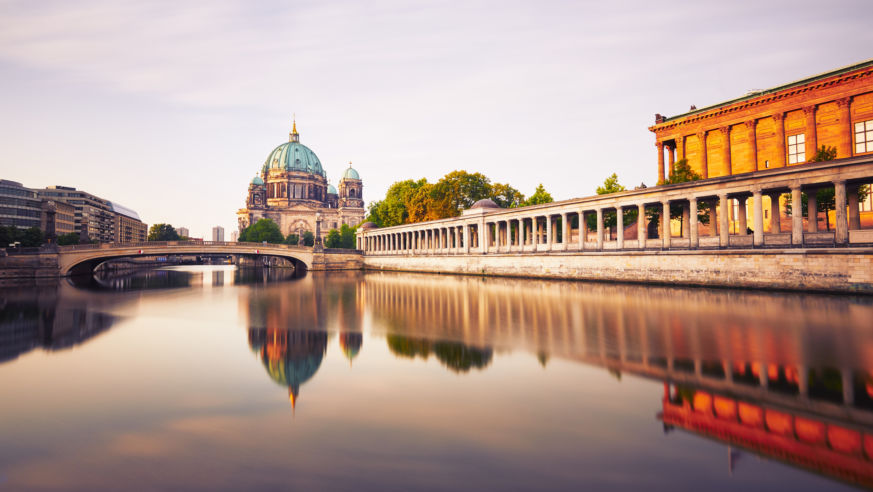 The Spree River surrounds five historic museums—and the iconic Berlin Cathedral. Visit them all in one day to save the most cash.

High style and hip design doesn't have to be expensive. You can experience art, restaurants, and nightlife in the trendy Mitte and Kreuzberg districts—for less than you’d think.

I was still in a pleasant, gauzy, art-induced haze after laying eyes on the Nefertiti Bust in Berlin’s Neues Museum when the November rain pelting Museum Island stopped for a few blissful minutes. I seized the chance to lower my umbrella and linger in the middle of Friedrichsbrücke footbridge, on the Spree river. Above, the sky was damp, hazy, and green-gray; reflections from yellow streetlights glowed warm in the rippling water. I ran my fingers along antique German script etched in the bridge’s concrete, the lettering like medieval calligraphy. The 18th-century Berlin Cathedral presided over it all, its tarnished sea-green dome stately and gothic. This view, I remember thinking, this dramatic vignette, is like a woodcut from an Edgar Allan Poe novel.

As I turned to continue down the cobblestoned path, a murder of crows began to swirl and scream overhead.

Witnessing the crows was one of many far-out moments I had in the city’s bubbling cauldron of rich history, modern art, addictive street food, avant-garde design, and friendly people. I did it all on a budget in one long weekend, with the trendy Mitte district as a home base. And I didn’t want to leave.

After my redeye on Airberlin, direct from New York City’s JFK airport to Tegel in Berlin, it was morning when I arrived in the trendy Mitte district—known for its café scene, galleries, and cool shops—and checked into the design-forward, you-won’t-believe-these-low-rates Circus Hotel (from about $95 per night, circus-berlin.de). The hotel isn’t whisper-quiet or plush, but its decor is youthful and energetic—silhouettes of birds on a bright-green background were painted on my room’s walls—and the Rosenthaler-Platz U-bahn subway stop is steps from the front door. I stowed my suitcase and waited for my room to open at the adjoining restaurant, Fabisch. Alongside heaping spreads of German wurst, cheeses, eggs, and breads, its 9-euro breakfast buffet offered nine kinds of hearty cereals, like “choco muesli” and rye “roggen flocken,” lined up neatly, waiting to be spooned into bowls.

When I ventured out that first morning, the streets were abandoned until about noon, when Berliners began to stream past wearing understated parkas, dark skinny jeans, and delicate nose rings—and exuding an effortless cool. The city is a night owl.

“Where should I go out tonight?” I had asked the hotel’s front-desk clerk. His buddy next to him, exuberant with a half-shaved head and ponytail, grabbed a red Post-It note and scrawled the best places to go clubbing: “Berghain, Tresor, Kater Blau, Watergate.” “Go early,” he urged me. “Go before 2 a.m., because from 2 to 6 a.m. it gets really crazy. Also, people might be having intercourse next to you, but it’s normal.”

After living in a sanitized New York City for years, sanctioned public intercourse seemed like a breath of fresh air. I was disappointed when, after my redeye, I couldn’t stay awake past midnight. But before the clock struck 12, I found the perfect bar. A smoky, red-lit dive with psychedelic toile wallpaper, Muschi Obermaier has vintage memorabilia shellacked to the walls: print advertisements from the 1960s, band posters, photos of nude models, and film stills (muschiobermaier.de). A giant bottle of Augustiner Lagerbier Hell cost less than $4; a small glass of Berliner Luft peppermint schnapps was under $3. Reclining on overstuffed leather couches or standing three deep at the bar, the men resembled Sting or Jack Antonoff; the women were petite, brunette versions of Brigitte Bardot, touseled bangs included. I lingered as long as I could.

The next day, it was pouring rain when I reached Mauerpark, in Prenzlauer Berg near Mitte, for a Sunday-only flea market where incense and mellow German tunes filter through the air, its stalls selling kitschy T-shirts; jewelry; clothing patches for 3 euros, some depicting the German flag; and vintage finery (flohmarktimmauerpark.de). Twentysomethings haggled for chunky knit sweaters, furry coats, silk shirts, and Vanna White–style sequined shells or sat, sheltered from the rain, at picnic-style tables drinking cold beer.

Afterward, I ducked into one of Berlin’s Photoautomat booths—an art project started in 2004—and dropped 2 euro coins into the slot (photoautomat.de). The light flashed four times, and I waited as the machine churned and groaned and finally spit out a strip of vintage-cool black-and-white photographs that smelled of darkroom fluid. I waved it in the wind to dry it, like an old Polaroid, later tucking it into a book for safekeeping.

Prioritize the art—especially the free stuff.

Art in Berlin stretches far beyond gallery walls, the city’s creativity spilling onto brick buildings, into alleyways, and coating the Berlin Wall itself.

Street art rises high and bold in the up-and-coming Kreuzberg neighborhood. Richard Ash’s “Astronaut Cosmonaut” floats above Skalitzer Street. “Pink Man,” made of small, writhing wormlike humans, dangles his prey close to his mouth near Oberbaum Bridge. Back in Mitte, the alleyway next to Haus Schwarzenberg museum is covered with art, including a portrait of Anne Frank by artist Jimmy C and images of Little Lucy, a cartoon character continually finding creative ways to kill her pet cat. Intrigued? Take a free three-hour tour with Alternative Tours Berlin to see important works and hear an elegant explanation of the difference between street art, tagging, and graffiti (free, alternativeberlin.com). Outside Haus Schwarzenberg, note the “stumbling blocks” on the sidewalk, one of many clusters of gilded stones in Berlin that serve as tributes to Jewish families who were forced out of their homes during the Holocaust.

Nearby, Museum Island—five museums on a stretch of land in the Spree River—is a treasure trove of ancient art and modern works. The best deal is to buy a one-day area ticket for access to all five (about $20, smb.museum). I was crunched for time but determined to see the Egyptian antiquities, including Nefertiti’s Bust, at the Neues Museum (admission about $13). An architectural wonder of old and new, the building was bombed during WWII and built up again on the ruins; inside, the brick foundation rises and collides with new, clean lines. As for Nefertiti, she was was even more regal than I had hoped: so reverentially lit she glowed, encased in glass at the center of a room all her own.

I followed the Spree River south to the Berlin Wall, with the murals of the East Side Gallery painted on its side (free, eastsidegallery-berlin.com). They’re alternately jarring and dreamlike: “The Kiss” between socialist leaders Erich Honecker and Leonid Brezhnev; a Trabant car bursting through the Berlin Wall; vibrant Batman characters populating “Sonic Malade.”

Between art-gazing, culture-lovers should take a mandatory spin through the ultra-modern Mitte bookstore Do You Read Me?! (doyoureadme.de). Bathed in white neon light, its streamlined shelves are stocked with mesmerizing avant-garde fashion magazines, quarterly literary 'zines.

One evening, I wandered into Me Collectors Room, a combination café/gallery showcasing both a Cindy Sherman photography exhibit and a long hallway filled with ancient curiosities, such as a narwhal tusk once thought to be a unicorn horn (admission about $8, me-berlin.com).

Street food like currywurst (sliced sausage the consistency of an American hot dog, doused in curry ketchup and sprinkled with curry powder) and fine dining are within reach in Berlin. Near Circus Hotel, Curry Mitte dishes out an entire currywurst meal for about $5, including French fries and a beer or soft drink, like local citrus-flavored soda Mezzo Mix (currymitte.de). I ate currywurst twice in three days: Once for lunch, sitting in the window, people-watching at the busy corner, and once after a pilsner at Z-Bar, a bar/cinema with red glitter–laquered tables and bottomless bowls of “peanut flips”—puffed corn chips with a sweet, peanut-butter-like coating (z-bar.de). The flavor was reminiscent of E.T. Cereal, sold back in the ’80s. In other words, just like heaven.

In Kreuzberg, eats are cheap and clustered together: Four pieces of baklava are about $1 at Salut Backwaren bakery (49/30-6182405). Not far away, Burgermeister, a former public restroom converted into a snack bar, grills up burgers and cheese fries doused with sauces like peanut butter and mango curry (burgers from about $5, burger-meister.de). The doner kebab was supposedly invented in Berlin, so it’s only right to grab one at Baghdad Bistro—it does brisk business after 2 a.m. (less than $4, bagdad-restaurant.de).

With the money you’ve saved, treat yourself to weinerschnitzel and apple streudel at South German restaurant Alpenstueck, where a chic crowd wearing dark sweaters and black spectacles befitting an architect sit at shiny gray tables arranged in neat lines (generous entrées from about $17, alpenstueck.com). Catch a boho vibe while sipping wine and sitting on homey, tapestried pillows at farm-to-table resto Katz Orange (glasses of wine from less than $4, entrées from about $19, katzorange.com). The lavender sausages, delivered in a cocotte on a bed of greens, were the best links I’ve ever had ($7). For further savings, split a slow-roasted “candy on the bone” short rib, melted pork belly, lamb, or Duroc pork entrée for two, with second helpings and sides in little terra-cotta crocks.

As you leave the tea house, look up, to your right. The Fernsehturm television tower is glittering like a disco ball, and your night is just beginning.