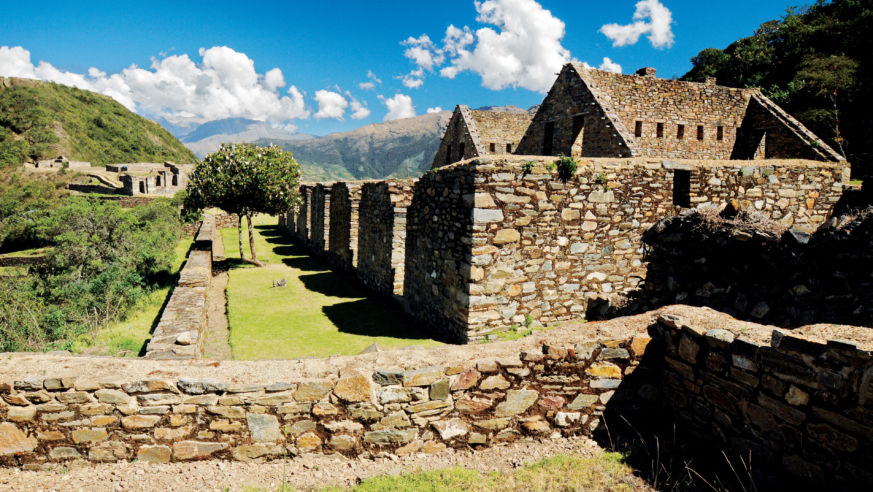 The ruins at Choquequirao.

It’s not the Incas’ fault that one Peruvian landmark stole the spotlight from all the others. But as the world prepares to celebrate a major Machu moment, it’s a good time to take stock of the other equally majestic ruins, just an ancient stone’s throw away.

Ever since Hiram Bingham stumbled upon a maze of stone terraces set high in the Peruvian Andes, Machu Picchu has been one of the world's most celebrated wonders. What many people don't know is that nearby sits a collection of similar Incan citadels—no less brilliant than Machu Picchu but far less trafficked. So while the world will celebrate the 100th anniversary of Bingham's discovery this July, we decided to throw a party for the entire neighborhood.

CHOQUEQUIRAO
Choquequirao is essentially Machu Picchu without the crowds—the terraced stone and emerald-mountain view are almost the same, but Choquequirao gets just 1 percent of the visitors. Or it did. Since 2008, when UNESCO put a 2,500-person-a-day cap on Machu Picchu visitors, tourists have started showing Choquequirao a lot more love.
Getting there: You'll have to work a bit to find Choquequirao (unlike Machu Picchu, there are no rail connections), so it's best to go guided. The Cuzco-based Apus Peru offers four-day hikes to the site, with three nights of camping (from $245 a person; apus-peru.com).
Difficulty level: High

LLACTAPATA
Aside from being a thrilling site itself—the ruins rise more than 9,000 feet into a cloud forest—Llactapata is one of the best places to see Machu Picchu, which sits just across the valley.
Getting there: From the Poroy station, near Cuzco, you can take the same train that you'd use to access Machu Picchu, then transfer to the Hidroeléctrica station ($68 one-way from Cuzco, perurail.com). From there, it's less than a half-hour hike to Llactapata.
Difficulty level: Moderate

VITCOS
The ruins at Vitcos are pretty enough, but it's the singular attraction of Yurac Rumi (White Rock) that makes the site worth the hike. The stone boulder is about 25 feet high and 50 feet long and covered in mysterious, intricate carvings. As a bonus, Vitcos sits next to one of the most charming lodges in the area, the family-run Sixpac Manco. "If there is a finer place in the universe to stay for $5 a night, I have yet to encounter it," says Mark Adams, who trekked to all three of these ruins while reporting his book Turn Right at Machu Picchu, out June 30 from Dutton ($27).
Getting there: Vitcos is so far off the beaten track that no outfitters offer tours just to it. Your best bet is to hire a car and driver in Cuzco with Quechuas Expeditions ($200 for a four-person car, one-way, quechuasexpeditions.com). From Cuzco, it's a seven-hour drive to the town of Huancacalle, then Vitcos is a four-mile hike away. Sixpac has no phone or website but is easy to find in Huancacalle.
Difficulty level: Moderate