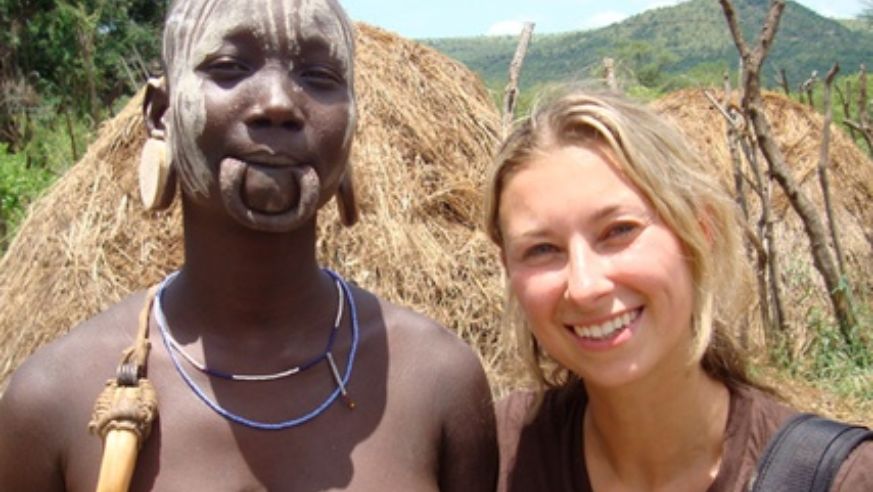 Julia Dimon is one-half of the quirky duo hosting the show Word Travels. Over the years, she has circled the world four times and visited more than 80 countries. This summer, she's jetting off to Madrid and Beijing for MSNBC's online travel series Destination Getaway. I recently caught up with Julia in New York, where I asked about her adventures.

Well, I recently got to try a local delicacy in the highlands of Ecuador called cuy, which we know of as the guinea pig. It's a delicacy there, and also eaten in Peru and Bolivia, so I was able to go into a traditional indigenous home and see its uses—from food to medicinal purposes, to keeping the house warm by living indoors, and as a sort of status symbol. It tastes like greasy chicken, but it's traumatizing because when you see it from the plate, the cuy is served with its face still on it, it has its fur, and you can see its little claws.

So there's nothing off-limits for you food-wise?

Absolutely not! The grosser the better. When I was in Venezuela trekking through the jungle, I tried a moriche worm. Because it was alive, that brings it to a new level.

OK then, let's talk about some other extremes you've experienced. What about a drink?

There was actually something really fun called the sour-toe cocktail up in the Yukon. That's whisky, and then it actually has a pickled severed human toe in it. Apparently the one in my glass was donated from a lawnmower accident. The deal is, a captain comes out and gives you a big speech with a ceremony, and then you chug this thing back and the toe has to touch your lips. Once you do, you become part of the sour-toe cocktail club. That kind of indicates your bad-ass Yukon status. I'm a card-carrying member.

Absolutely! How about an extreme adventure?

One of the adventures I've done is the Zambezi Gorge Swing in Zambia. It's a lot like bungee jumping where you throw yourself over a large drop, but instead of just dropping down and coming back up, it's like a pendulum swing. You're looking down and it's quite terrifying, but then the setting is beautiful over the gorge and you can see the Zambezi River. It was one of the biggest adrenaline rushes!

What about the complete opposite feeling, where you've been the most at peace?

One of my new favorites is the Atacama Desert in northern Chile. The landscape is really unique, and there are parts that feel like you're on the moon. And then there's this moment when the sun's going down and there's the most beautiful sunset—you know that kind of rich desert color, where everything's a warm sun hue? I looked around and thought, you just can't get this complete connectivity with nature anywhere else. And Rishikesh, India, which is like the yoga capital of the world…there's something going on there. That's where The Beatles went to practice. It's pretty much a spiritual hotbed for yoga and ashrams.

Well Julia, for my last question, I have to ask…What is the most extreme mishap you've had happen to you?

Yeah well, I got malaria in East Africa, and that was awful. But truly, out of all the countries I've been to, there have been few mishaps. I really think that's important to share how few problems travelers have, because sometimes you think it's a big bad scary world out there. So I really like to encourage people to travel and experience things in countries that are a bit off the beaten path, and say, "Look, if I can do it, you can do it!"

Julia's happy to answer all of your travel and adventure-related questions on her new website, traveljunkiejulia.com, including tips for choosing the best volunteer vacations, to how to use Twitter to find better travel deals, and how to break into the travel-writing biz.