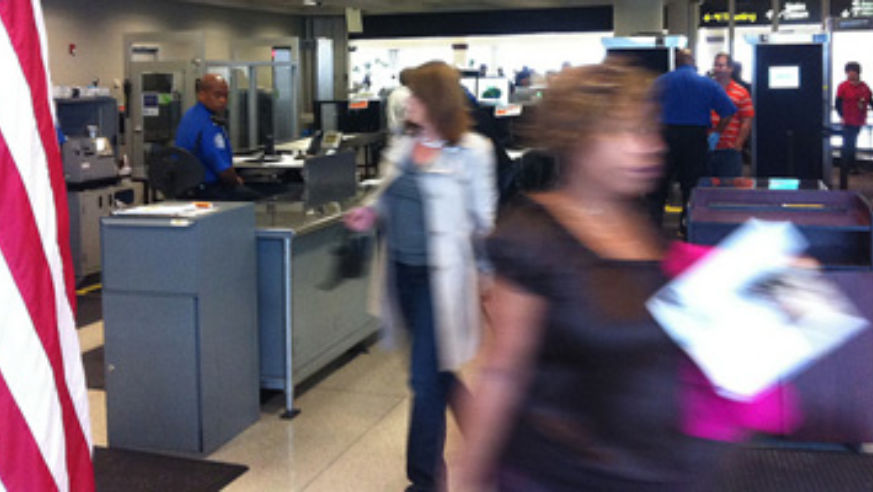 Here's a look back at some odd, ugly, infamous, occasionally nude face-offs between airline passengers and TSA security officials.

In early April, an apparently disturbed woman removed all of her clothing in full view of airline passengers and workers at Denver's airport. The woman, who was smoking, was asked by airport workers to put out her cigarette. She responded by taking off all of her clothes, and the only explanation offered to quick-to-appear police officers was that she was exhausted from a lack of sleep the night before.

Just this week, a man got naked at Portland's airport, though he has a better reason for going au naturel than a poor night's sleep: He was protesting what he categorized as harassment by TSA security workers.

Toward the end of 2011, news broke regarding the treatment of an elderly woman's treatment by security at New York's JFK airport. The 4-foot, 11-inch 85-year-old grandmother, who needs a walker to get around, claims that she was forced to remove her pants and show her colostomy bag during a humiliating strip search.

In January, the U.S. Senator from Kentucky missed his flight out of Nashville when he was escorted out of the screening area by security officials because the body scanner alarm went off and Paul refused to go through a pat-down.

In Charlotte in 2010, a cancer survivor who had worked as a flight attendant for over three decades, was forced to remove her prosthetic breast from her bra during a pat-down that she described as "aggressive."

Pat Down of 3-Year-Old in a Wheelchair

On his way to Orlando to visit Disney World, a 3-year-old boy in a wheelchair was subjected to a pat-down by security officials at Chicago's O'Hare airport last month. While trying to remain calm and reassure his son, the boy's father recorded the pat-down and later posted the video on YouTube.

Anger and Humiliation in Raleigh-Durham

Among the travelers upset with pat-downs at the Raleigh-Durhman airport in 2010 was a retired Army officer who filed a complaint after being groped around his genitals. A TSA worker explained that the pat-down was being conducted because "there was something suspicious hanging from between" the man's legs, to which he responded, "that something suspicious was my [genitals], you dummy."

In 2010, a 31-year-old software programmer named John Tyner secretly recorded his pat-down at San Diego's airport, during which Tyner criticized the process and famously said, "Don't grab my junk, bro," to the TSA worker responsible for the physical pat-down. Tyner, who also is heard saying, "I don’t understand how a sexual assault can be made a condition of my flying," posted the video on his blog, and it quickly went viral.

A woman went ballistic after a TSA workers reportedly grabbed her breasts during an inspection at the Phoenix airport. A video of the event, which occurred on New Year's Eve of 2010, made its way to YouTube.

The No-ID Confrontation in Albuquerque

In January of 2011, a Seattle man was acquitted of all charges related to a confrontation with Albuquerque airport security, in which the many refused to show ID and insisted on videotaping the showdown with his cell phone. On the video, the man is heard saying, "I know my rights!" Apparently, he did indeed.

The Tweet That Got Two Tourists Barred from the U.S.

Busted for Bringing Cupcakes and Bagels Through TSA Checkpoints?