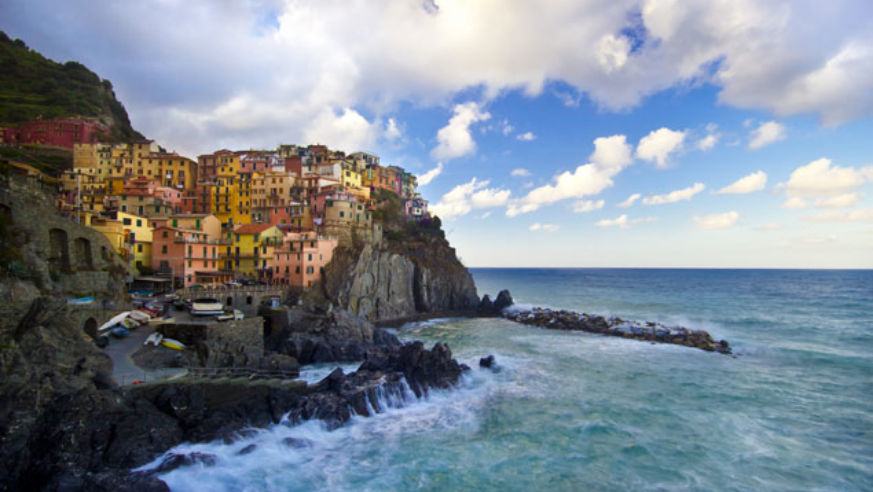 The pastel buildings in the Cinque Terre town of Manarola brighten up the craggy Italian coast.

Some cities don't need neon to brighten up the landscape. From pastel towers on the Italian coast to a crayon-colored artist colony in Argentina, these 12 towns make color the primary focus.

Ever notice how many of the world's great cities and monuments are, well, a bit bland? The pharaohs obviously skimped on the paint budget for the pyramids. And today, the Parthenon looks regally monochrome from its perch on the Athenian Acropolis. But there are some bright spots. Thankfully there are the candy-colored towns of Italy's Cinque Terre and vibrant neighborhoods from Buenos Aires to Cape Town to keep your vacation photos from looking a little beige. Or take a trip north of the Artic circle to a Norwegian town that brightens up the lunar landscape with charming orange, blue, and red dwellings (be sure to say hi to Santa Claus while you are there). Join us on a tour to five continents as we explore a dozen of the world's most vibrantly colorful towns, and we'll let you know exactly where to go to get the best view.

SEE THE MOST COLORFUL TOWNS!

Manarola is the oldest of the Italian towns known as the Cinque Terre—the Five Lands along the country's northwestern coast that cling, lichen-like, to the rugged rocks above the Ligurian Sea. All five localities—Riomaggiore, Manarola, Corniglia, Vernazza, and Monterosso al Mare—are part of a UNESCO World Heritage Site recognized for its "harmonious interaction between people and nature." UNESCO obviously knows its color wheel: The sea's rich blues complement the sunset-colored shops and Genovese-style tower homes of Manarola with panache, and the buildings appear almost cultivated, like a flower garden tucked into the craggy slopes. Particularly stunning is the vista from the narrow rock ledge across the harbor at Punto Bonfiglio, when the retiring sun deepens and perfects the town's palette.

That wash of blue on the horizon isn't a sunny sky (though Jodhpur has plenty of those, too—with barely a foot of rain each year). Rather, the wave unfolding from the foot of the massive fortress Mehrangarh is a cornflower-colored settlement, aptly termed the "Blue City." The color may originally have had social and cultural significance, indicating the habitations of upper-caste Brahmins (today, it is less prone to indicating religious boundaries). Few communities are this coordinated: Steady blues give the settlement an airy, fantastical look, like a magical town drawn from the spiritual pages of the Hindu Bhagavad Gita. Towering Mehrangarh completes the mythological look. Begun in 1459 and expanded over the centuries, the fortress is now open to visitors and provides panoramic views of the old city's heavenly patchwork.

From its humble beginnings as a slave settlement in the 16th century, Buenos Aires's La Boca neighborhood has become one of the capital's most culturally diverse districts—and certainly its most colorful. Paint-by-numbers conventillo homes, built by Italian immigrants and daubed with vibrant primaries, give the neighborhood a lively air. Caminito Street, La Boca's most popular drag, is particularly rich in these shared tenements—but it's also rich in oglers. Away from Caminito's throngs, the colors might not be quite as loud, but creativity abounds throughout the district—painters and sculptors of all stripes have transformed the neighborhood into an artistic hub. For a look at modern La Boca art, head for the galleries at Fundación Proa, which also offers a library, restaurant, and rooftop terrace for a birds-eye perspective on Buenos Aires's luminous playground.

Scattered across the bleak lunar landscape like a handful of candy drops, the barn-like homes in Ittoqqortoormiit (pronounced it-doc-cut-door-meet) lend a surprising touch of domesticity to one of the world's most desolate regions. Even the interior of the circa-1928 church is as richly colored as its façade. Perched dramatically on a fjord-laced peninsula, the town is the entryway to Northeast Greenland National Park, the world's most northerly and flat-out hugest national park—topping 240 million acres, the park could accommodate more than a hundred Yellowstones. But even without wandering into the beyond, Ittoqqortoormiit provides a keen glance into frontier life in Greenland. The 70 colonists who arrived in the area in 1925 speckled the rugged coastline with houses painted in burnt ochers and royal blues. With a winter that never ends—the sea here is frozen seven months of the year—those warm colors aren't just pretty, they're a psychological necessity.

Diverse and unrepentantly eccentric, the City by the Bay wears its colors proudly, from the displays of elaborately embroidered cheongsamin Chinatown windows to the Seven Sisters, the famous lineup of delicately-tinted Victorian homes on Alamo Square. For more freestyle paint jobs, check out the murals at Clarion Alley, a narrow sliver connecting Mission and Valencia Streets. A multiplicity of art styles drawn in innumerable hues covers the walls and fences of the alleyway, providing the (mostly) consenting community with a dynamic gallery of homegrown creations. If that's still too restrained for your tastes, join a million other revelers at the annual San Francisco Pride Celebration and Parade (usually held on the last full weekend of June). It's the biggest LGBT event in the country, and, as such, one of the biggest tsunamis of color on the planet.

From a distance, Willemstad's waterfront looks positively unreal, like a doll city plunked down into the Caribbean. The oldest section of Curaçao's capital dates back to 1634, and the commingling of Dutch architecture and a Caribbean palette has resulted in a riotous cityscape rivaling the town's own Carnival for vibrancy. One island legend claims that the painting began in earnest when a Dutch governor proscribed white houses, believing the tropical sun's powerful glare a medical risk. See the buildings up close and then cross the Swinging Old Lady (the local name for the pontoon-supported, 1888 Queen Emma Bridge) for a view from the across the river. Gouverneur de Rouville restaurant has a terrace with the perfect vantage point (the wide selection of rums is also a plus).

At Longyearbyen's latitude, about the only warm things around are the rusty reds of many of this coal-mining town's homes. The capital of the Svalbard archipelago lies a full 12 degrees north of the Arctic Circle—which means it's not just Nordic, it's the most Nordic of all Nordic lands (according to its proud inhabitants, anyway). The rows of identically constructed homes—done up in rich, Crayola oranges, blues, and reds—stand out starkly from the snow-strewn hills and crevasses of Longyearbyen's otherworldly surroundings. The entrances to some defunct mines remain open to visitors, with Mine No. 2B being particularly endorsed. "As a matter of fact," Norway's official tourism guide blithely asserts, "this mine is where Santa Claus lives." Those rosy homes? That's where the elves work.

Settled by the successors of African and South Asian slaves brought by the Dutch beginning in the 1500s, and subsequently influenced by the migration of Islam, Cape Town's Bo-Kaap district has over time developed into a candyland of lemon, lime, and grape-tinged houses. For more on the neighborhood's past, head to the Bo-Kaap Museum, housed in a historic building largely unchanged from its original 1760s form. Then trek up Wale Street and turn off onto Chiappini Street for a particularly striking row of Dutch and Georgian terraces, cheery aquas and pistachio greens, and glimpses of the surrounding cloud-draped hills.

For a once-shattered city, Berlin has a reputation as an art destination that hinges on a somber irony: The postwar apportioning that divided the city into East and West was, and is, a driving force for its creative spirit. The East Side Gallery, slapped onto a .8-mile remnant of the Berlin Wall, displays the political and occasionally absurdist imagery of a world torn asunder—a vibrant visual paean to a society in flux. A rich collection of Berlin's art resides in the city's 180 museums, but the real draw for color junkies is the public art scene. Pieces like Jeff Koons's sculpted, ocean-blue Balloon Flower populate Berlin's plazas, while unauthorized artworks—some, like the artist Blu's mask-ripping mural in Kreuzberg, massive in scale—adorn urban surfaces everywhere. The Tacheles art house, converted from a derelict building built early in the 20th century, is a gallery inside and out: Combining planned exhibitions and the colossal canvas of the building's own façade, Tacheles remains a work in progress, just like its chameleonic mother metropolis.

The city walls of the seaside resort town of Tenby might have kept attackers out during the Middle Ages, but today they can't quite contain the pastel Georgian buildings spilling right out onto the sand. The view from the harbor is rightfully renowned, but you can get an even better taste of Tenby's medieval past by taking a ramble down one of its narrow, winding alleys—like the quirkily named Lower Frog Street, a canyon of color. (No amphibian greens, though-Tenby's hues skew lighter.) The town is always popular with holidaymakers, but it's getting an extra boost this year with the recent opening of the Wales Coast Path, an 870-mile meander along the country's edge that includes Tenby on its route. Trekkers can enjoy shades as sweet as the seaside treats sold by candymaker Lollies.

A millennial city that wears its age proudly, Gdańsk has a dazzling collection of preserved structures that tower above the cobbled streets of the Główne Miasto (Main Town). While the Baltic port has more than its share of stoic structures (check out St. Mary's Church, which, with its 256-foot tower, is purportedly the largest brick church on earth), parts of the city are draped in surprisingly upbeat tones. The sentinel-like mansions along Długa, the main pedestrian drag, form solid walls of peach, olive, and mauve. Their combination of jovial colors and dignified sculpture and ornamentation reflects Gdańsk's split personality: Centuries after the height of its prosperity as a trading hub in the 1500s, the city fell hard under the spell of collectivism. The Solidarity movement that eventually helped topple communism in Europe began in the city's shipyards, and today Gdańsk is still on the ascent after its postwar dreariness.

At the center of the Philippine capital, the market-rich neighborhood of Quiapo packs in a bewildering variety of cultural, culinary, and corporeal colors that makes the rest of Manila pale in comparison. On any given day, the rugged streets fill beyond bursting with vendors hawking traditional gold-trimmed barong tagalog shirts, sweet sun-yellow mangoes from the island of Guimaras, and fierysiling labuyo (birds-eye chilis) in Christmassy reds and greens. But the real star of Quiapo's dappled streets is the classic Philippine jeepney. Modeled after American army jeeps, the flamboyant minibuses are ubiquitous on the capital's crowded roadways, and each is a unique work of art. The vehicles are painted with slogans, patterns in blaring primary colors, and gaudier-than-life portraits of pop stars and cultural icons—think Mother Mary riding shotgun, with Madonna bringing up the rear.