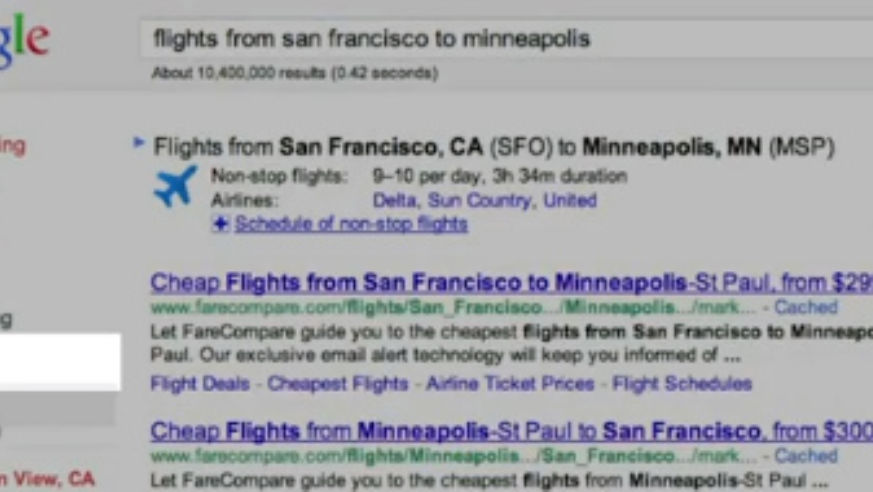 Google launched its Google Travel product, Flight Search, this afternoon. You can now search for flight schedules and fares by typing in a request in the main Google box or by going to google.com/flights. (The news was first reported by Search Engine Watch.)

At first glance, Kayak, Bing, and other metasearch sites are still far more helpful than Google, in my opinion. For now, Google only displays flight results for major U.S. cities and only for round-trip economy-class flights.

In the main Google search box, you could enter "flights to CHI" (without the quotation marks). Google would figure out your hometown, based on where you're searching from, and list flights from your nearest major airport to Chicago.

You could also search on "flights from san francisco to minneapolis." If you did that, a new "Flights" filter would appear in the left-hand column, next to things like "Video" and "News." (See image at the top of this post for an example.) If you clicked on "Flights" you would get to see a map of the US and a few simple drop-down choices to narrow down your search. Do you want nonstop flights? A specific time for your outbound flight? Once you find a fare you like, Google will shoot you over to the airline's site, for booking.

Google has only begun to display fares, of course. If the past is any guide, the search giant will probably become more competitive and innovative in displaying fares as the months go on.

Google is using ITA Software—a company it bought (as we reported in April)—to power its flight search. Budget Travel's editor in chief Nina Willdorf has previously praised ITA Software as "the best flight search tool you've never heard of," so all Budget Travel editors are optimistic about what Google might do next with this powerful software.

Google hopes that flight search boosts its popularity with people who use the Internet to look up information. While nearly two out of three searches are still done on the famous site, the percentage of searches done on Google has been declining for a couple of years as rivals, like Facebook, gain popularity, new data shows.