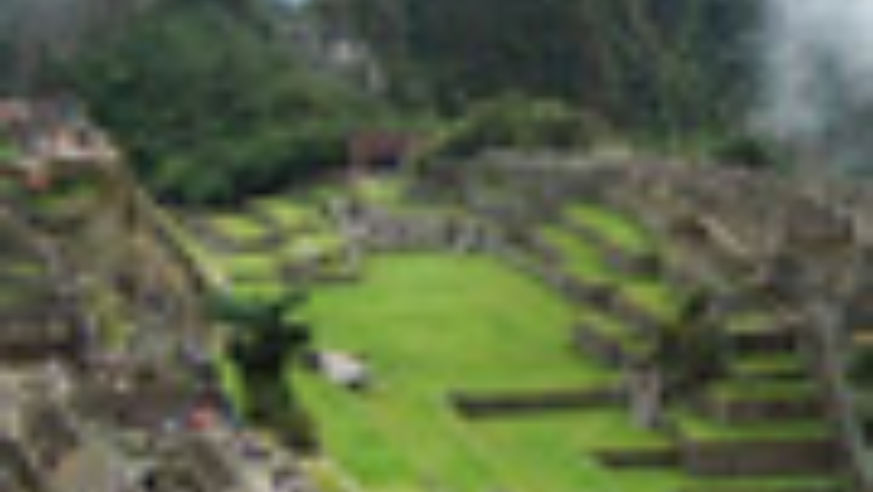 The reward for trekking through the Peruvian Andes comes on day four, when you see the famed Incan ruins spread below, bathed in the first rays of sunlight.

We could have taken the train to Machu Picchu. There's no road in, so that's how most people arrive. After spending several days in Cuzco, high in the Andes, chewing coca leaves to acclimate to the altitude, they ride PeruRail to the famous 15th-century Incan ruins. It's a three-hour journey, versus a four-day trek if you decide to hoof it as the Inca did—and there was no question which route we'd choose.

My husband, Robb, a National Geographic photographer, and I, a writer, always opt for full immersion. When we wanted our sons, Gus, 13, and Jeb, 11, to learn Spanish, we left Texas and moved to San Miguel de Allende, Mexico, for three years. And last November, to teach them world history, we cashed in our miles and hit the road (and homeschooled the boys). Peru was the first leg of that journey.

It's theorized that the Inca built the immense complex as a royal retreat and then abruptly abandoned it, possibly following a smallpox outbreak. Whatever the true story, the "Lost City of the Inca," hidden among incisor-like peaks, was for centuries known only to locals. It was discovered, or brought to light, by American Hiram Bingham in 1911. Now everyone wants to get there. But it takes some doing. If you're going on foot, you need a permit and a guide. We signed on with well-established outfitter SAS Travel Peru and were part of a big group: 14 trekkers from all over, two guides, a cook, and 20 porters (who carried tents, equipment, and some luggage). But that makes the 28-mile journey sound far easier than it was.

Surviving Dead Woman's Pass
The first day was relatively drama-free; we went from 8,900 feet to 10,800 feet, on a sunny dirt path with views of the churning Urubamba River. As we walked, we passed ruins of Incan outposts, as well as Andean locals—most of the women wearing traditional full skirts, striped shawls, and felt fedoras—who use the trail as a lifeline to the outside world. The afternoon was capped off by a pretty steep uphill for about an hour, a scary taste of what was in store the next day on the hardest stretch: crossing Dead Woman's Pass, elevation 13,776 feet. That night, camped out with Jeb, I was exhausted but couldn't sleep. Had I overestimated my stamina? Were we expecting too much of the boys?

Starting at 6 a.m., we hiked uphill for four hours straight. Jeb and I were seriously struggling when the guides let us have our last presummit rest in a meadow with roving llamas and a few women selling sodas and American candy. Still tired, even after downing Cokes, Jeb and I worked out an incentive plan: We'd go 100 steps and then stop, rest, and eat two Skittles. A hundred steps, two Skittles. Again and again, gaining ground little by little. Jeb mentioned that it had been a long time since he'd washed his hands, so I popped the candy into his mouth, giving the impression, I'm afraid, that I was using dog-training tricks on my kid. Close to the top, Jeb got a spurt of energy and started sprinting. He passed Gus, and I heard people cheering, "Come on, Gus! Great job, Jeb!" It felt like a marathon, and seeing the boys cross the finish line brought me to tears. Of course, I may also have been crying because it was just so freaking hard.

Best. Massage. Ever.
On day three, our guides set up camp at a civilized site. Civilized in that there was electricity, lukewarm showers, a bar, and massages for $25. Naturally, I had to have one, and surprisingly, so did Gus. He and I went into the cabin together in our bathing suits, and two Andean masseuses went to work on our burning calves and knees aching from so many ascents and descents (that day alone, we had walked down 2,000 narrow, slick stone steps). Invigorated, we rejoined the nightly routine: a tasty meal (curried chicken, cauliflower tempura, freshly baked pastries) that always elicited the same response—"How did the cook ever make this out here?" Then, by candlelight, we all played a quirky New Zealand version of Uno. Life on the trail had united us. That night, we drank to conquering mountain passes, getting drenched in cloud forests, enduring primitive toilets—and finally making it to Machu Picchu.

The view from the Sun Gate
The area can often be shrouded in fog, so all of us had been praying to the Incan gods for good weather. On our last day, we were awakened at 4 a.m., and I was thrilled to peek out of my tent and see a clear sky. It was rainy season, but the downpours had yet to begin in earnest. For two hours we moved quickly, knowing our goal was close. I was behind Sarah, a 32-year-old British architect who had great insights into what a leap it would be to build anything, let alone precise stonework, in such a forbidding spot.

At about 7 a.m., a guide pointed to one last uphill. "That's the Sun Gate," he said, referring to the entrance upper-crust Inca had used when they arrived. We scrambled up steps and snaked around a pillar, and there were the ruins spread below us. Bathed in the first rays of sun, the compound was more dazzling than any photos of it I'd ever seen.

In the shadow of Wayna Picchu, the peak many people climb for an overview, we stood agog before the astrological observatory, elevated like a raised chalice, and had our sacred moment in the Temple of the Condor. After an hour or so of taking everything in, we all collapsed on the grass in the main plaza, elated and proud to have earned the view (in our minds) far more than the incoming train-takers. As Robb said, in his best fatherly tone, "It's the things you really work for that mean the most." Even though my legs were still screaming, I had to agree.

When to Go
During summer, up to 2,000 people a day visit the ruins. For lower rates and fewer crowds, September through early November, and April into early May—the start and end of the rainy season—are ideal.

Getting There
Round-trip flights between Miami and Cuzco start at $470 on American Airlines, connecting via Lima (aa.com). The PeruRail train ride to Machu Picchu is a three-hour journey to the town of Aguas Calientes, where a 30-minute shuttle delivers visitors to the site (perurail.com). If you want to make this four-day trek, SAS Travel offers daily departures, and you can return to Cuzco by train (sastravelperu.com, from $500 per person including meals, a tent, and a sleeping mat). Book a porter to carry your bags ($60 for 20 lbs., $120 for 40 lbs.)—unless you're really ready to test your stamina.

What to Pack
Good hiking shoes, a rain jacket, a sun hat, pants that zip off to shorts, and a walking stick (pick one up in Cuzco). You can rent a sleeping bag and a backpack from your tour operator.

Where to Stay
Before venturing to Machu Picchu, visitors have to acclimate to the altitude with a night or two in Cuzco. For a cultural experience, consider staying with an Andean family through Peru Treks & Adventure (perutreks.com/projects-homestay.html, $15 a person including breakfast and dinner).

Where to Splurge
Spending a night or two in Aguas Calientes, the only town near Machu Picchu, enables you to tackle the site first thing in the morning, well before the first train passengers arrive. The Rupa Wasi Condor House Ecolodge has suites with cloud-forest views (rupawasi.net, double suite $99, including breakfast). The bar at the stylishly rustic El Mapi inn serves the perfect post-trek pisco sour (mapi-inn.com, doubles $210).

"Pictures fail to do it justice, though I took my fair share. Llamas run around, completely unfazed by humans. We, however, were delighted by them and couldn't help but giggle at the tourists who flattened themselves against a wall as the llamas waltzed by." —Sara Chapman, Seoul, South Korea

NEXT: PLANT YOUR FLAG IN A FARAWAY PLACE >>