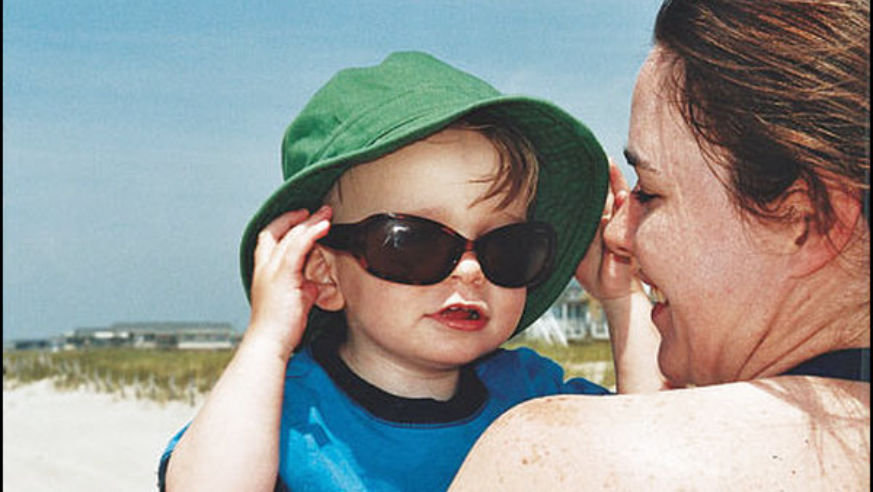 Even infants know the beach is made for relaxation

Allowing an 18-month-old to plan the family vacation sounds ridiculous. But that's pretty much what my wife, Jessica, and I let happen last summer. Our son, William, didn't pick the destination or book flights or anything. It's just that he factored so heavily into every decision that he was effectively calling the shots. There's a phrase that goes something like, "If the baby ain't happy, nobody is," and wiser words were never spoken.

We considered a cruise or all-inclusive resort. Those work for a lot of people, but we preferred getting away from crowds, and it wasn't worth paying for extras--yoga lessons, rock-climbing walls--that we'd never use.

All William really wanted was space to run, water to splash around in, and his mom and dad at his disposal. The classic beach house was in order.

After looking into half the beach towns on the East Coast, I became intrigued with Oak Island, about an hour southeast of Wilmington, N.C. In photos, Oak Island appeared a little rough around the edges, with a nice but unremarkable beach and small, weathered bungalows. William certainly didn't care that the place didn't have swank appeal--and a few other features were far more important. Namely, the mellow waves were perfect for a person who had learned how to walk only a few months earlier.

Through real estate agency Oak Island Accommodations I found a house that was within four blocks of everything we needed, including a beach, playground, and a few shops and restaurants (800/243-8132, rentalsatthebeach.com). Rental houses have names in this part of the world, and this one fit our simple mission: A Beach Cottage.

I knew we'd done something right when we pulled up under the house (it was on stilts), and saw a bunny scamper into the bushes. Will gave the house a thorough once-over. His first discovery was that the coffee table was a couple of inches lower than ours. He was standing on top of it before I'd brought a single bag inside. Next he crawled under an end table and peeked through the bamboo shafts underneath. (We called this spot "jail.") Then it was on to the screened porch, which came with rocking chairs and a view of the ocean to the right.

We established an easy, baby-friendly pattern early on: Have one parent wake with Will (usually around 5:30 a.m.), and get him out of the Pack 'n Play. Start him off with Cheerios, Craisins, milk, perhaps a bowl of strawberries or oatmeal. Look at dinosaur books, play chase around the coffee table, and watch The Wiggles until a more reasonable hour came, the other parent was awake, and we could have a proper breakfast. Cook omelets or walk to a diner for pancakes. Double back to a park for running in the grass and a few minutes on the swing set. Load Will up with sunscreen, put on his green hat, and hit the beach around 10 a.m. Set the kid free, his bare feet slapping loudly against the hard, wet sand. Watch him run and run, then stop, pick up a shell or a piece of seaweed, toss it or hand it over to Mom and run some more, giggling and baby-talking the entire time. Go back to the house for lunch, followed by a family nap. Jessica occasionally snuck off to the beach by herself for an hour. More beach in the late afternoon. Pick up supplies--charcoal, hot dogs, beer, ketchup, frozen pizza--at one of the nearby mini-marts. Whip up an easy dinner of burgers or chicken cooked on the $10 grill I bought down there and assembled in full MacGyver mode, using a potato peeler as a screwdriver. Put Will to bed, drink a cold beer or two in front of the TV, and head to bed ourselves. Repeat.

It was a week of flip-flops, sunglasses, bed head, lemonade, and outdoor showers. It was wonderful--for all of us.

During Will's usual beach reconnaissance on our last full day, he stumbled onto a series of puddles left behind by the receding surf. For more than an hour he bounced between them, splashing, digging with shells, at one point sprawling out on his belly and rolling around. We couldn't have made him happier with any water park or amusement ride.

When the time came, I scooped him up and started for home, knowing there would be a battle. Sure enough, he let out a few yelps and curled his body into the shape of a boomerang, fighting to stay at the beach. By the time I reached the pavement, however, he was squinting contentedly up at the sun and licking the salt off of his fingers.

That night, Jessica put William in a set of yellow foot pajamas--her favorites, with a flap on the butt that reads life is good. After our week at the beach, there was no need for the reminder.