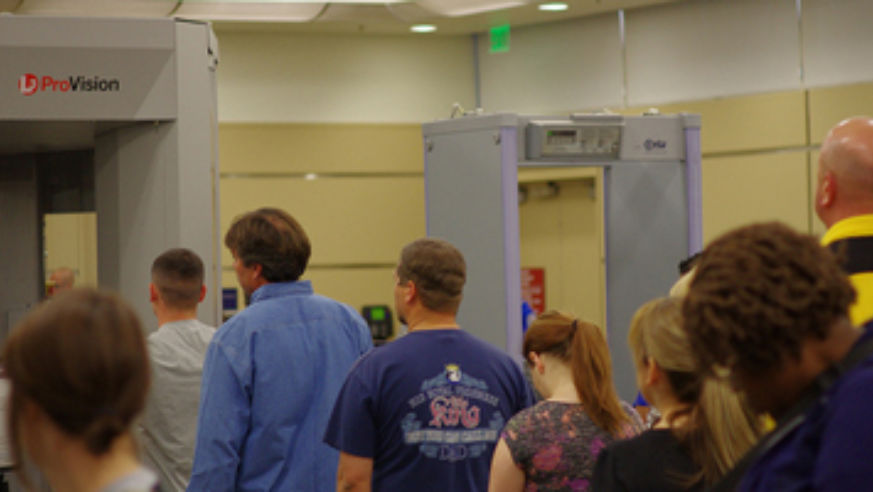 Courtesy niiicedave/Flickr
A familiar sight at the airport

There are a lot of jokes at the expense of the TSA, thanks to some ridiculous mistakes and policy misunderstandings on the part of agents. But it's no laughing matter when an agent's ignorance causes a teen traveler's life–saving medical equipment to malfunction.

When 16–year–old Savannah Barry—who is a Type 1 diabetic and wears an insulin pump—was flying out of the Salt Lake City airport last Monday, she followed the guidelines for diabetic travelers listed on the TSA website and asked for a pat–down instead. She even presented the agent with documentation that the $10,000 insulin pump should not be taken into a full–body scanner. But the agent insisted it would be fine and sent her through. Moments later, her insulin pump malfunctioned (see the video below of an interview with Savannah about the incident).

To add insult to injury, she was given a pat down—exactly what she had requested in the first place—in addition to her trip through the body scanner after TSA agents spotted her insulin and the juice she was traveling with to prevent low blood sugars.

Savannah’s mother was told by a representative of Animas (the company who made her insulin pump) to have her unplug the device as soon as she landed and rely on insulin shots until further notice. Luckily she was able to obtain another insulin pump—evidently another pump company heard her story and sent it to her after she returned home to Colorado.

We contacted the TSA to get their official statement:

“TSA has spoken with the passenger and a member of her family regarding her screening experience and we will continue to communicate directly with the family to address their concerns. TSA works regularly with a broad coalition of advocacy groups representing passengers with disabilities and medical conditions to better understand their needs. Signage posted at security checkpoints where advanced imaging technology (AIT) is used informs passengers that AIT is always optional for all passengers, including those traveling with medical devices.”

Traveling with a medical device can be complicated. This story really struck a nerve with me—I’m not a Type 1 diabetic, but my younger sister, April, is. She was diagnosed at 14 and has been living with an insulin pump ever since. On family vacations, she’s had to pull TSA agents aside and explain her situation, show them the insulin pump, and be led to the side for a pat down that ends with swabbing her hands for bomb residue. There is nothing like watching your little sister follow the rules only to have everyone else in line staring at her like she’s a criminal, wondering what she did to deserve a pat down at the airport. But this is her only option if she wants to get on that plane, since she cannot go through the full–body scanner with her “electronic pancreas,” as she calls it.

So what’s your take on all this? Do you think it's unfair to blame the entire TSA for one agent's misstep or do you think this is a sign that the entire organization needs an overhaul?

Busted for Bringing Cupcakes and Bagels Through TSA Checkpoints?