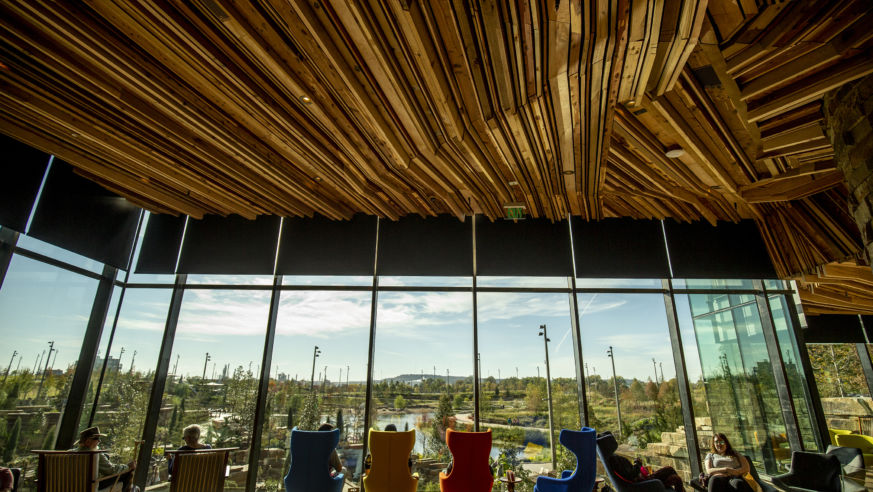 Creative energy blends with homegrown midwestern charm in this historic city off of Route 66.

If Oklahoma native son Woody Guthrie could write a song about Tulsa today, he would sing about the vibrant creativity, the enterprising entrepreneurs, and the friendly locals, an idealized portrait of the kind of America he immortalized when he sang This Land Is Your Land. From its grand art deco architecture to its trendy cafes, shops, breweries, and bars, Tulsa pulls the rug out from whatever you're expecting from a trip to cowboy territory, particularly this town once known for its place in American history as the end of the Trail of Tears. That's in no small part due to a giant ongoing investment that Tulsa native and public-school alum George Kaiser, the billionaire banker and oilman-turned-philanthropist, is making in the city. (More on that in a second.) Here are a few places to check out and things to do to that bring the city's history and newfound energy together.

1. Gather at the Gathering Place

There is really no straightforward way to describe the Gathering Place (gatheringplace.org), which sprawls across 100 acres along the Arkansas River. It's part theme park, part public park, part recreational hub. It embodies a five-acre state-of-the-art playground that feels like something out of a German fairy tale forest, a stylish lodge-like community center with a giant fireplace and free Wi-Fi, plus a skate park, sports courts, nature trails, a labyrinthine “sensory garden” for kids with interactive, multi-sensory features, two desensitization spaces designed to have a calming effect on children with autism, a water play-space with contraptions that spray water seven feet into the air, family-friendly eateries and concession stands, green spaces, and even more. The $465 million Gathering Place was developed by the George Kaiser Family Foundation, making it the largest private gift to a public park in U.S. history. 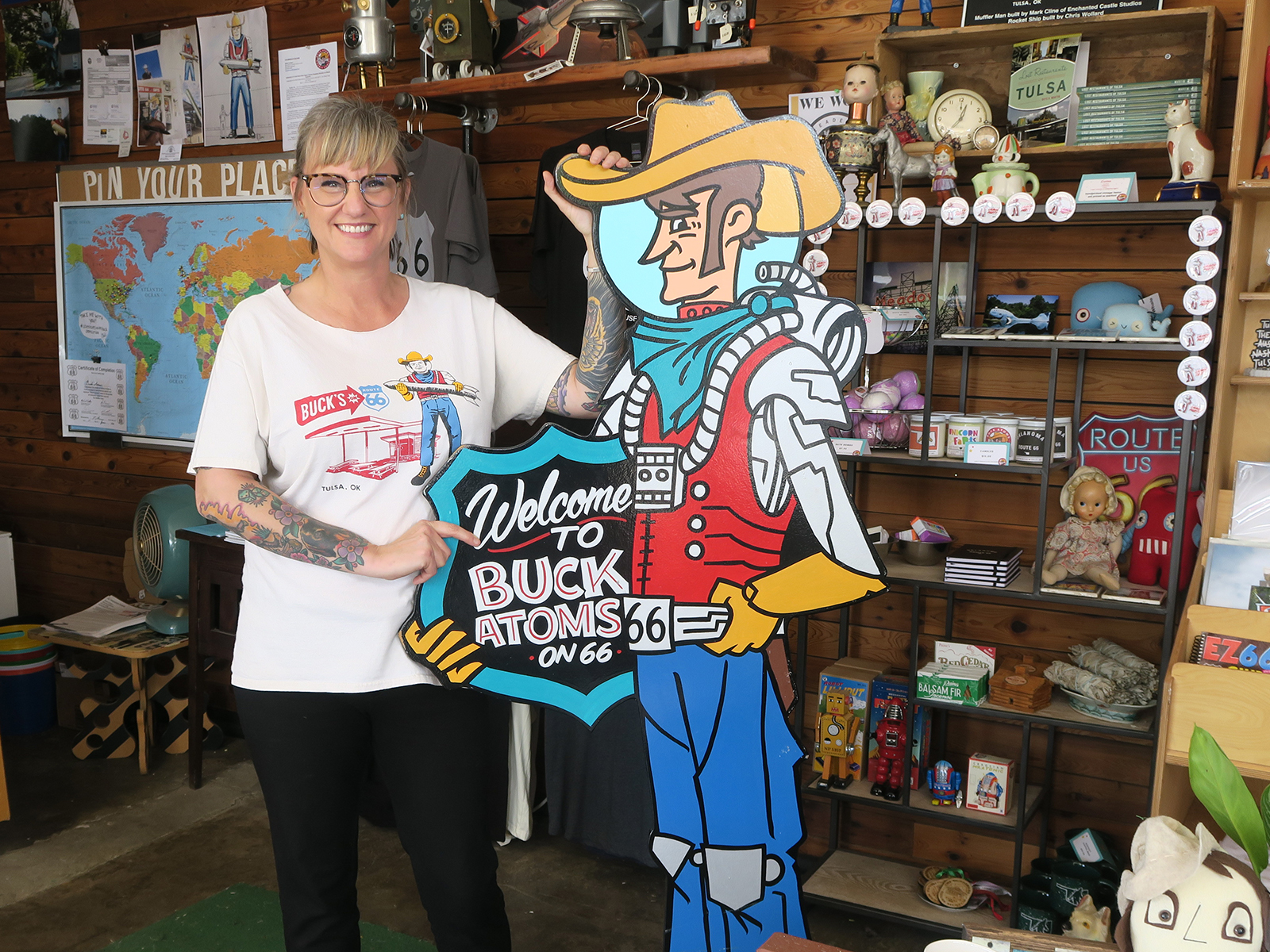 Of the many, many changes that Route 66 has undergone since it was established as one of the nation's original highways in 1926, the most recent ones have included closures of old roadside eateries and while many landmarks remain, others have disappeared over time. It’s in the name of renewal that in May, Mary Beth Babcock erected Buck Atom Space Cowboy Roadside Attraction, a 21-foot fiberglass statue of an animated astronaut, outside her store, Buck Atom’s Cosmic Curios on 66 (buckatomson66.com). It’s a tribute to an era when these mighty “muffler men” kept watch on the road from Chicago to L.A. Its retro style befits her store, a treasure trove of books, figurines, and sundry gift items that evoke the atomic era. This is just one of the stops on the walk down Tulsa’s stretch of the historic road. Set off from downtown, where it's designated as 11th Street, and you’ll pass a cemetery, established in 1902, the charming modern housewares and furniture shop Jenkins & Co. (jenkinsandcotulsa.com), the iconic Meadow Gold sign, which once tempted travelers with promises of ice cream, then a cluster of stores including Buck Atom's, a used record shop, a vintage clothing spot, and a depot for furniture made with reclaimed materials. Wrap up at Soul City, a vibrant old-school bar with indoor and outdoor stages and live music every night.

3. See Where Art and History Meet 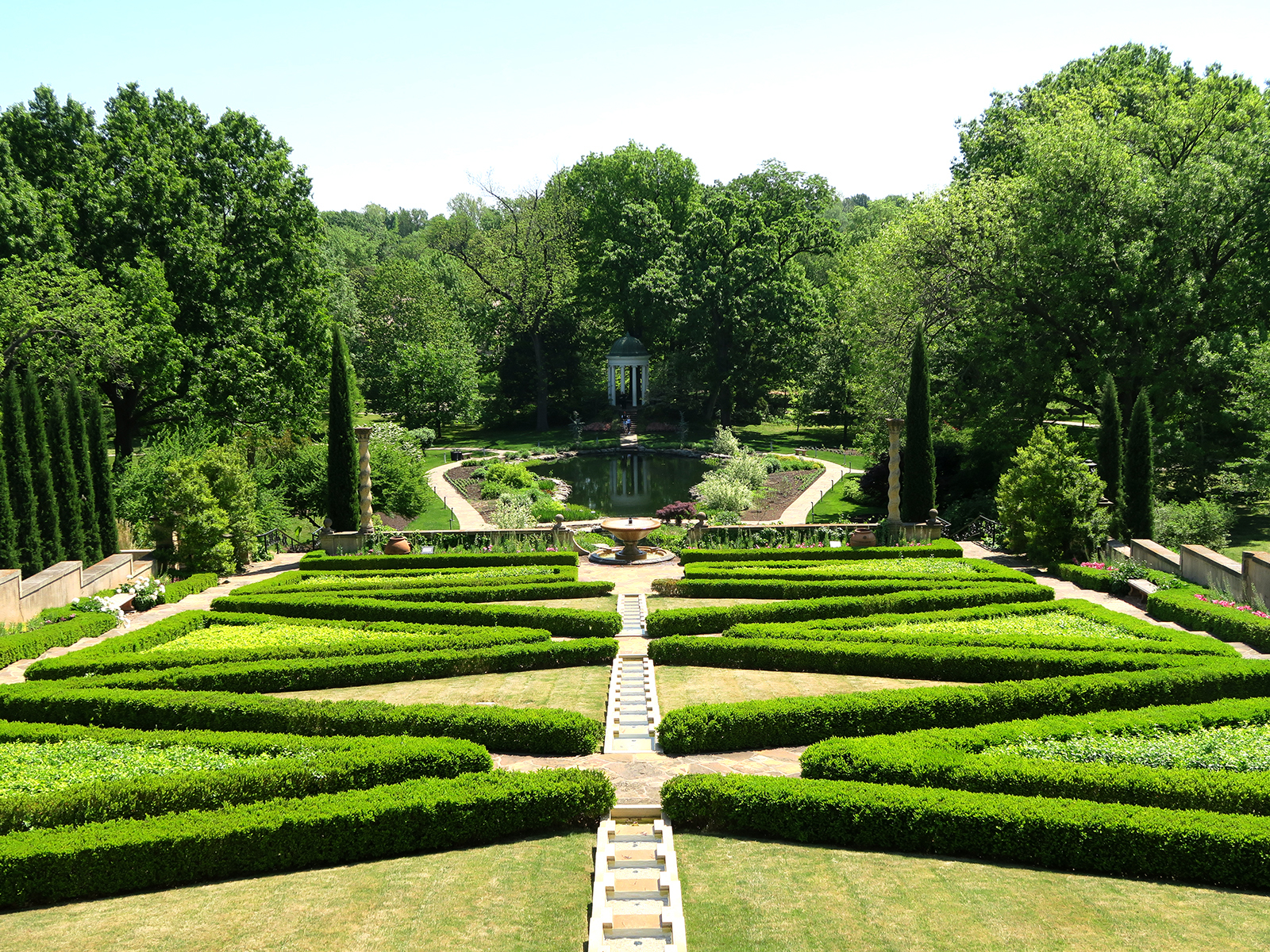 You can go to the Philbrook Museum to gaze at the Renaissance paintings, works by Rodin, Picasso, and Pueblo artists, and plenty other gorgeous art and ancient artifacts. You can go to wander in the sprawling, meticulously landscaped gardens. Or you could go to get a sense of the way Oklahoma oil moguls lived when Tulsa was the Saudi Arabia of the west. The Philbrook (philbrook.org), located about three miles from downtown, is set in a 72-room Italian Renaissance villa built as the home of Waite Phillips, the magnate who founded Philips Oil. In 1938, Philips and his wife donated the villa to the city as an arts center, and the building itself is as much of an attraction as the works it holds. He clearly spared no expenses in construction--teak floors, marble fireplaces, ornate ceilings, Corinthian columns. His passion for beautiful things also shines through in the downtown buildings that he funded. The Philtower and Philcade, art deco masterpieces, are grandiose office buildings that still anchor the city's skyline. 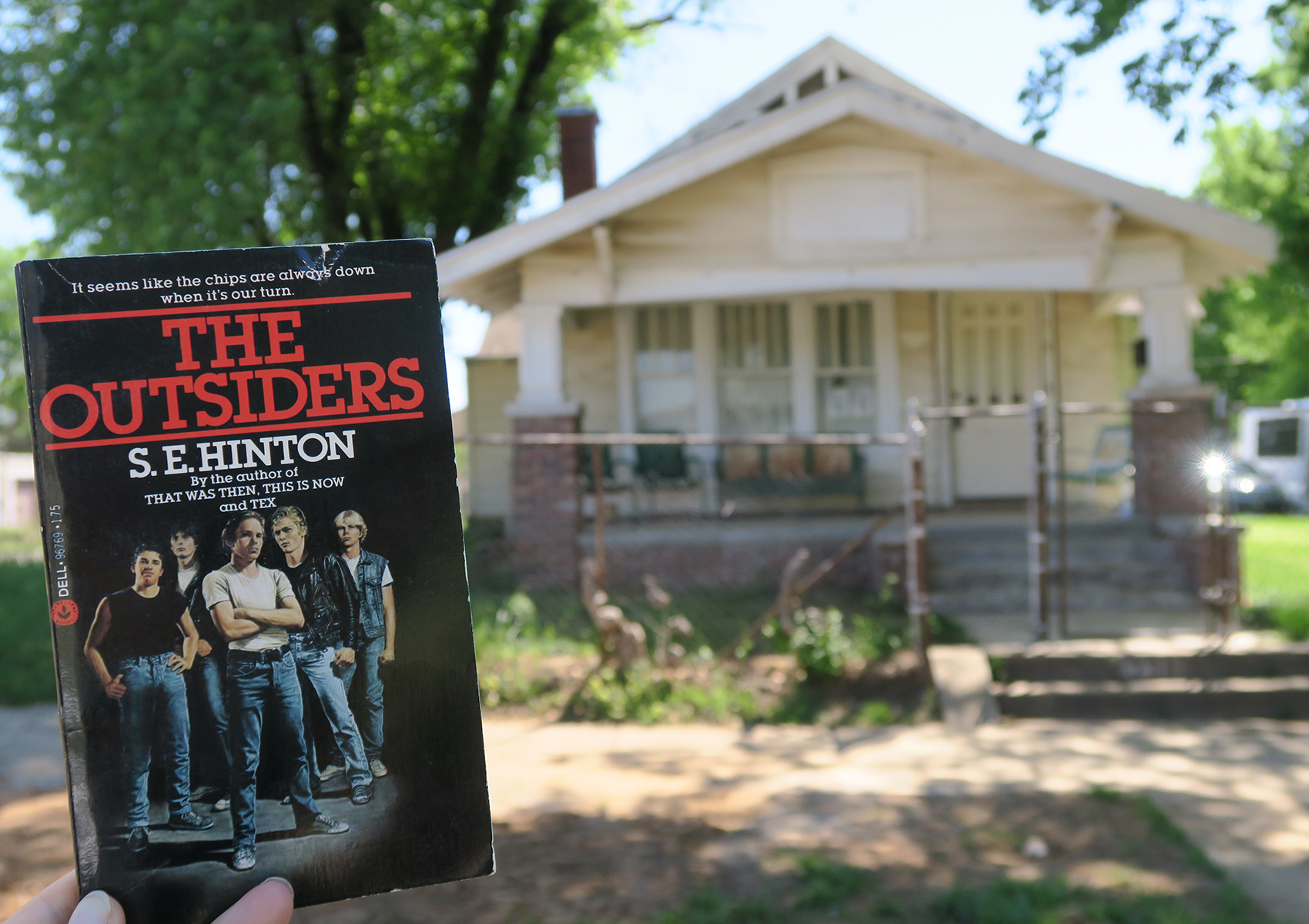 The house at 731 N. St. Louis Avenue is quite ramshackle and the yard is unkempt. It doesn’t inspire much enthusiasm. Unless, of course, you recognize the home from Francis Ford Coppola’s The Outsiders, the 1983 movie starring a pack of young heartthrobs whose names are now cornerstones of American pop culture: Tom Cruise, Patrick Swayze, Emilio Estevez, Ralph Macchio, Matt Dillon. It's based on the book written in 1967 by Tulsan S.E. Hinton when she was 15. It’s never gone out of print and remains on the reading list in many American public schools. According to Danny Boy O’Connor, founding member of 1990s hip-hop group House of Pain, the house is a national treasure, so when he visited Tulsa and discovered it in disrepair, he bought it and launched a Kickstarter campaign to rescue it from its scheduled date with a wrecking ball. With help from musician Jack White, he raised the money, gut-renovated the place, and painstakingly restored it to match how it looked on screen, down to stains on the wall and grime on the stove. With the support of Ms. Hinton, filled it with costumes and artifacts from the movie, including Coppola's director's chair, many editions of the books and VHS copies, and stills from the film. Tours, which involve meeting downtown for a van that will take you to tour the house and cruise around to a few of the various sites featured in the movie, (theoutsidershouse.com)

Throughout America, food halls have begun to seem like the new shopping mall, not least because every city has one. Tulsa's Mother Road Market (motherroadmarket.com) makes for an exciting visit for a few reasons. First, the premise: It's a nonprofit. The Lobeck Taylor Family Foundation operates the market as well as a commercial kitchen with incubator programs that help entrepreneurs launch businesses. Check out the Kitchen 66 stall for pop-ups from the program's emerging food companies. Second, the Nashville hot chicken at Chicken and the Wolf, a local cult favorite that draws fans each day for its signature chicken--just be sure to heed the warnings that accompany the hottest menu items. There are vegan versions, too. (The owners also run a standalone hot chicken restaurant and the funky Lone Wolf Bahn Mi.) There's also an outpost of the much lauded Oklahoma Joe's BBQ, the requisite food hall taco stall (& Tacos), Nice Guys Shrimp Shack, the hard-to-resist Big Dipper Creamery and OK Cookie Monster, globally accented options at Bodhi Bowl, and, perhaps most attention-grabbing of all, Umami Fries, known for its fry options with kimchi or beef toppings. Add to that a sweet little general store with local produce, the full-service Wel Bar, sprawling covered outdoor area in the back with communal tables and a green space for kids to run around, and you can practically make a day of it.

Let it be known: Tulsans love coffee. Coffee shops here, however, go far beyond the standard “third-wave” cafés, the term used to describe places that focus on single-origin beans, fair trade, and meticulous brewing techniques. Like many places around the U.S., coffee drinks at these cafes are made with the same level of craftsmanship as artisanal cocktails. Unlike many places around the U.S., Tulsa has several spots where you can hang out all day drinking top-rate java and stay in your seat when evening arrives and the cocktail menu goes into effect. Cirque Coffee (cirquecoffee.com), for instance, has stools along a long wood counter, cozy couches, colorful murals, and shelves of whiskey, gin, tequila, vodka, and rum on the wall. The sounds of an espresso machine resound through the airy warehouse-chic space all day long. Come evening, the many folks who’ve been typing on their MacBooks fold them up in favor of the beautiful hard-covered cocktail menu, which offers familiar classics and many originals, including, fittingly enough, creative coffee cocktails. (See: The Hotrod, a mix of cold brew coffee, curacao and simple syrup) Hodges Bend (hodges-bend.com), on the other hand, looks has all the trappings of a nouveau-vintage cocktail bar—exposed brick walls, dark wood furniture, pressed-tin ceiling— that also serves terrific coffee and specialty java drinks made with their own blend. Drinks here include classics, a few originals, and a thoughtfully curated wine list. A globally-accented menu ranging from duck confit tacos to veggie bibimbap round out the offerings.