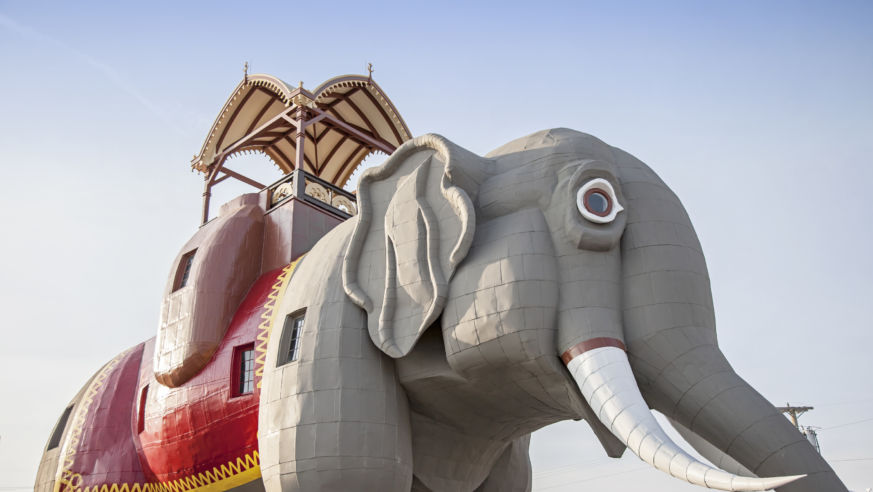 Not all National Historic Landmarks are presidential homes, historic districts, and Civil War battlefields. Here are a few of the more unlikely ones that define America.

Of the 90,000-some sites on the National Register of Historic Places, a list determined by the Department of the Interior’s National Park Service, only about 2,500 are deemed to have enough historical and cultural significance to be recognized as National Historic Landmarks. Churches, forts, historic homes, banks, bridges, and even boats are a dime a dozen. Lesser known, however, are the mining sites, landfills, and zany statues. Here are a few of the more unlikely sites that have had an impact on our culture and influenced who we are as Americans.

Several thousands of years before North Dakota’s oil mines triggered a Gold Rush-style blitz of industry, the Plains Indians in the area were mining flint, a resource so valuable to them that archaeologists insist that you can’t talk about the native culture without mentioning it. They mined over 150,000 pounds of the stuff to make arrowheads and other tools. One of the biggest quarries, the Lynch Quarry site, which spans over 690 acres, has, thanks to the efforts of local landowners, staved off development and infiltration by coal companies. It’s remained intact to the point that the anvils used to sharpen arrows and such are still there. Arguably the nation's most overlooked natural resource, it became a landmark in 2012. 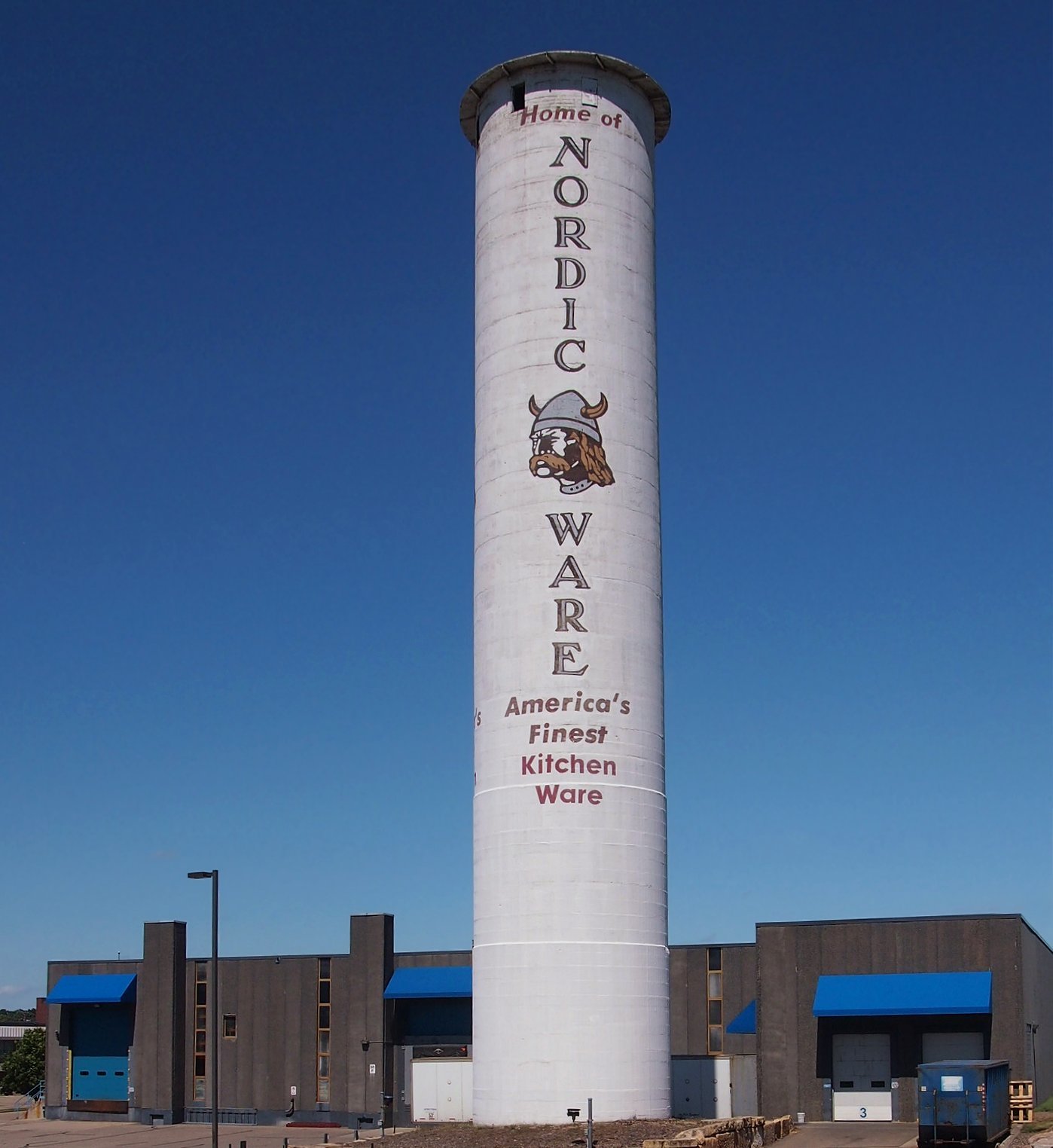 Before there were skyscrapers and Space Needles or, for that matter, telephone poles, there were grain elevators. The Peavy-Hagline Experimental Concrete Grain Elevator, a rural tower that stretches 125 feet into the air, is the first of its kind in the United States and, it’s presumed, the world. Before it was built in 1900, elevators were made of wood, but this one was an architectural marvel of its time. According to the Minnesota Historical Society, it served as a model for future concrete structures built around the United States, satisfying the builders’ intention to prove that concrete could indeed be used in elevator construction. French architect LeCorbusier praised it as "the magnificent First Fruits of the new age."

For the most part, we take garbage pickup for granted these days: You put it out on your curb and it disappears. But regional sanitation systems are part of a tremendous, complex industry, and it’s come a long, long way as cities have expanded and developed. The Fresno Municipal Sanitary Landfill is ground zero for innovation in the sanitation industry. The creators of the landfill, which operated from 1935 to 1989, at which point it spanned 145 acres, are known for pioneering trenching, compacting, and daily burial techniques to tamp down on rodent issues and other problems. Urban problem-solving at its finest. 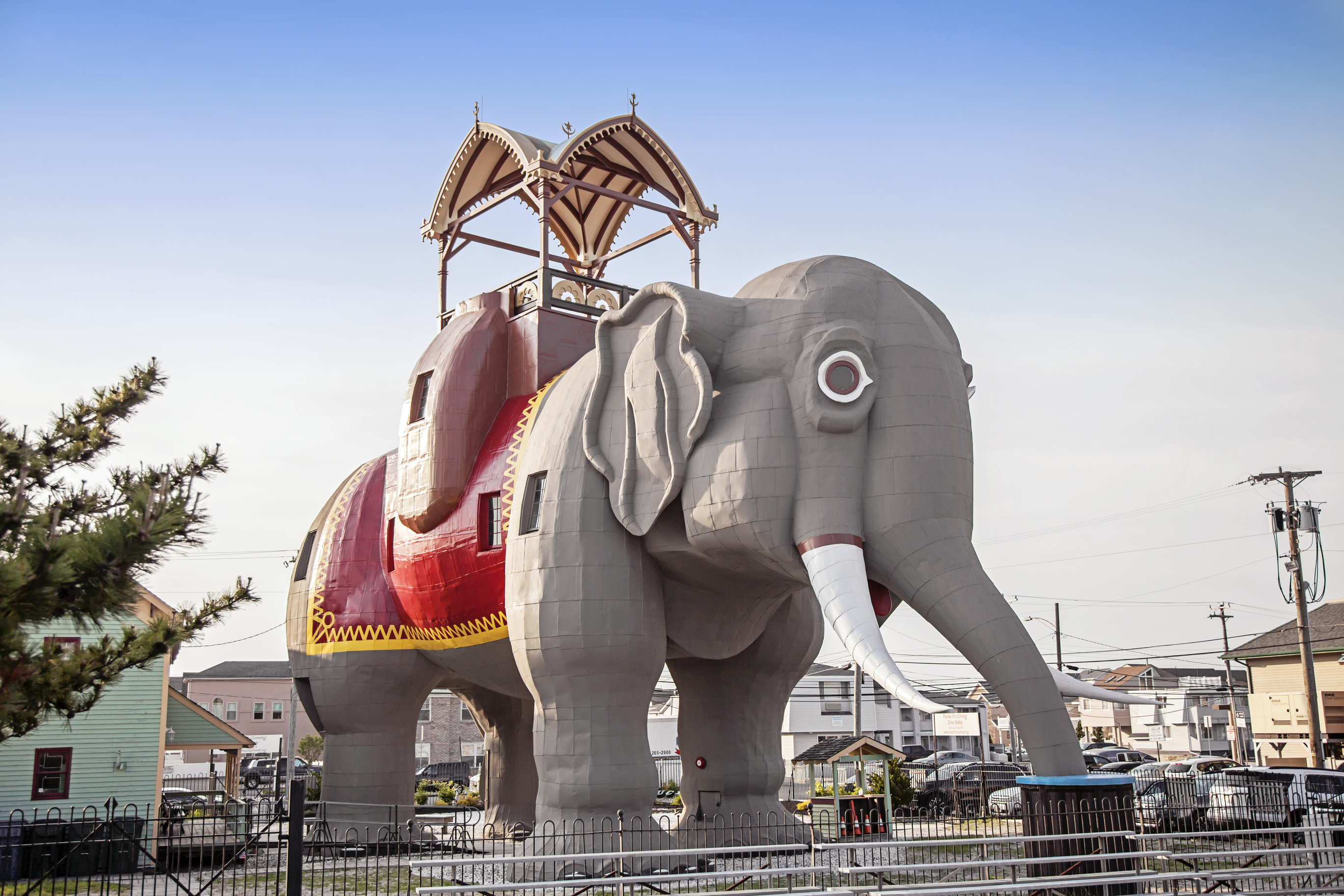 Dumbo notwithstanding, Lucy, located five miles from Atlantic City, is easily the most famous elephant in the United States. The six-story, nine-ton quadruped, originally made of wood and tin sheeting (she was buttressed with steel in 1970), has appeared in movies, television dramas, comic strips, various History Channel and Travel Channel specials, Mr. Roger's Neighborhood, and more. She's been a restaurant, offices, and a tavern. And as a testament to her endurance, she was virtually unscathed during Hurricane Sandy. Tourists visit her to climb the spiral staircase inside her to a hodwah on her back that delivers 360-degree views of the Jersey Shore. The National Park Service, which declared her a landmark in 1976, notes her as being a prime example of novelty architecture, an oversize structure designed in an unorthodox shape.

In 2005, when Howard High School in Wilmington, Delaware, became a National Historic Landmark, then state senator Joe Biden said in a statement, “The selection of Howard High School as a historic landmark is fitting because it encompasses both the struggles of our past and the promise of our future. Our hope is that this recognition will serve as a very visible and powerful reminder of just how far we have come and how much further we must still go." The school played a critical role in the landmark 1954 U.S. Supreme Court decision in Brown v. Board of Education, which declared it unconstitutional to segregate public schools. (The Brown case was actually a combination of five cases, including one that contested black students be bused to Howard, a black school, when a white high school was closer to their home.) Students here learn history not just from the books, but from their everyday surrounds. 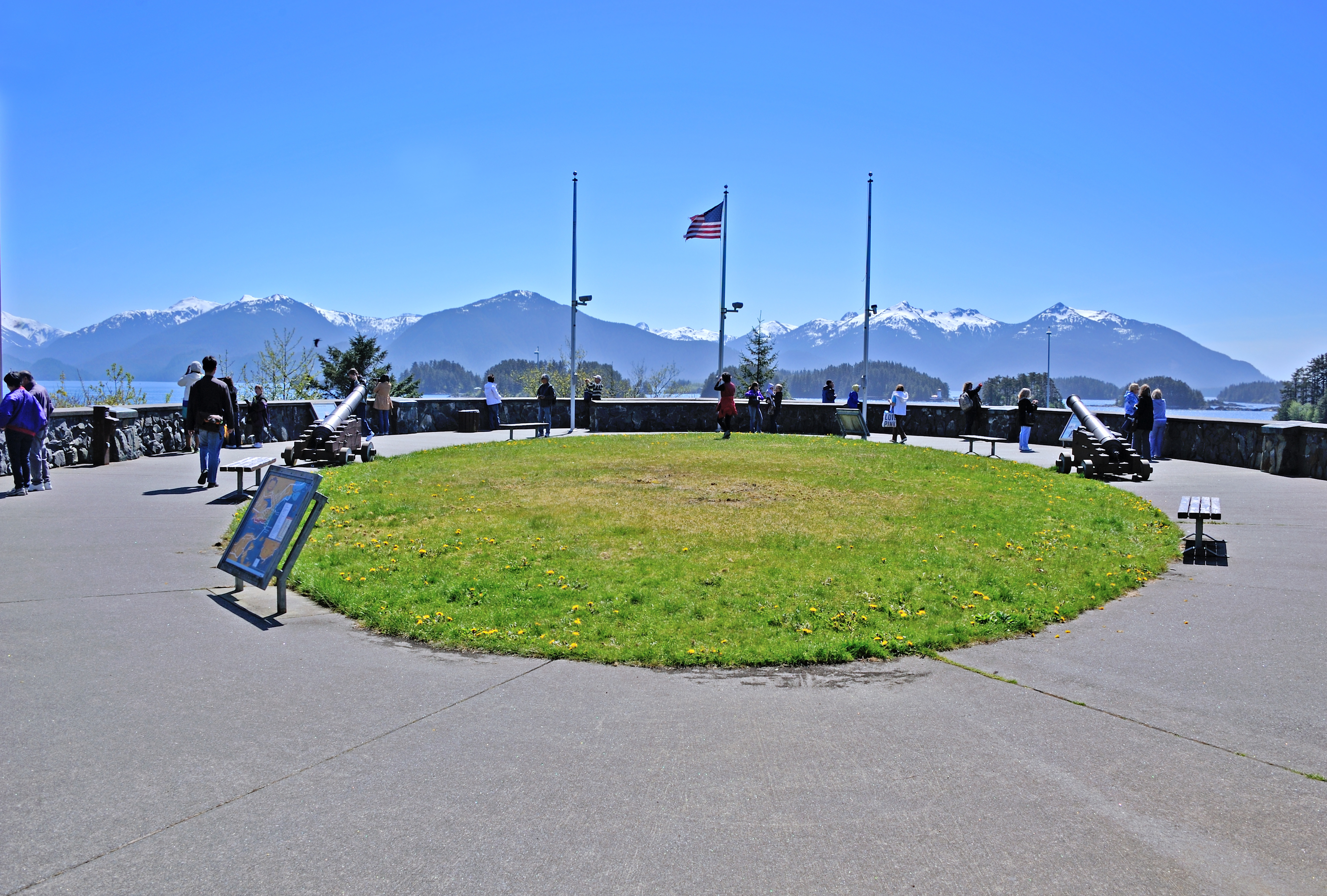 Really? A flagpole? Rest assured, it’s not just any old flagpole. The flagpole that marks Castle Hill, which was later renamed Baranof Castle State Historic Site, is where, in 1867, the Russians relinquished Alaska to the United States and, soon after, where the 49-star American flag was raised to commemorate Alaska’s new statehood for the first time. The pole is perched on a rock ridge that’s nearly 60 feet in the air, a prime perch for observing Sitka's gorgeous and historic cityscape.

Idaho is one of the 11 states that Lewis and Clark crossed during their epic expedition from 1804 to 1806, so, accordingly, the landscape is dotted with an assortment of landmarks marking their path. But there is one among them that has nothing to do with that dynamic duo: Declared a landmark in 1965, you might say the Experimental Breeder Reactor No. 1 is where nuclear energy was born. The desert-situated decommissioned reactor was the world’s first nuclear power plant to generate electricity when, in 1951, it illuminated four 200-watt bulbs. This relic of the past is commemorated as a harbinger of the atomic-energy-driven future.

Many buildings are declared landmarks because they're where a historical person lived or died, a monumental event happened, or a company set up its manufacturing operation. There are loads of landmark banks, courts, jails, hotels, and churches. But only the grand Greek Revival-style County Records Building in Charleston carried the superlative classification of most fire-protected building when it was built in 1829, making it oldest fire-resistant building in all the land today. The structure is solid masonry and stucco, with iron shutters on triple windows, which allowed for more light, which meant less need for candles. These and other architectural features made it so sound that it survived the 1886 earthquake. In recent decades, it housed the South Carolina Historical Society, which renovated the building and opened it as a museum last summer. 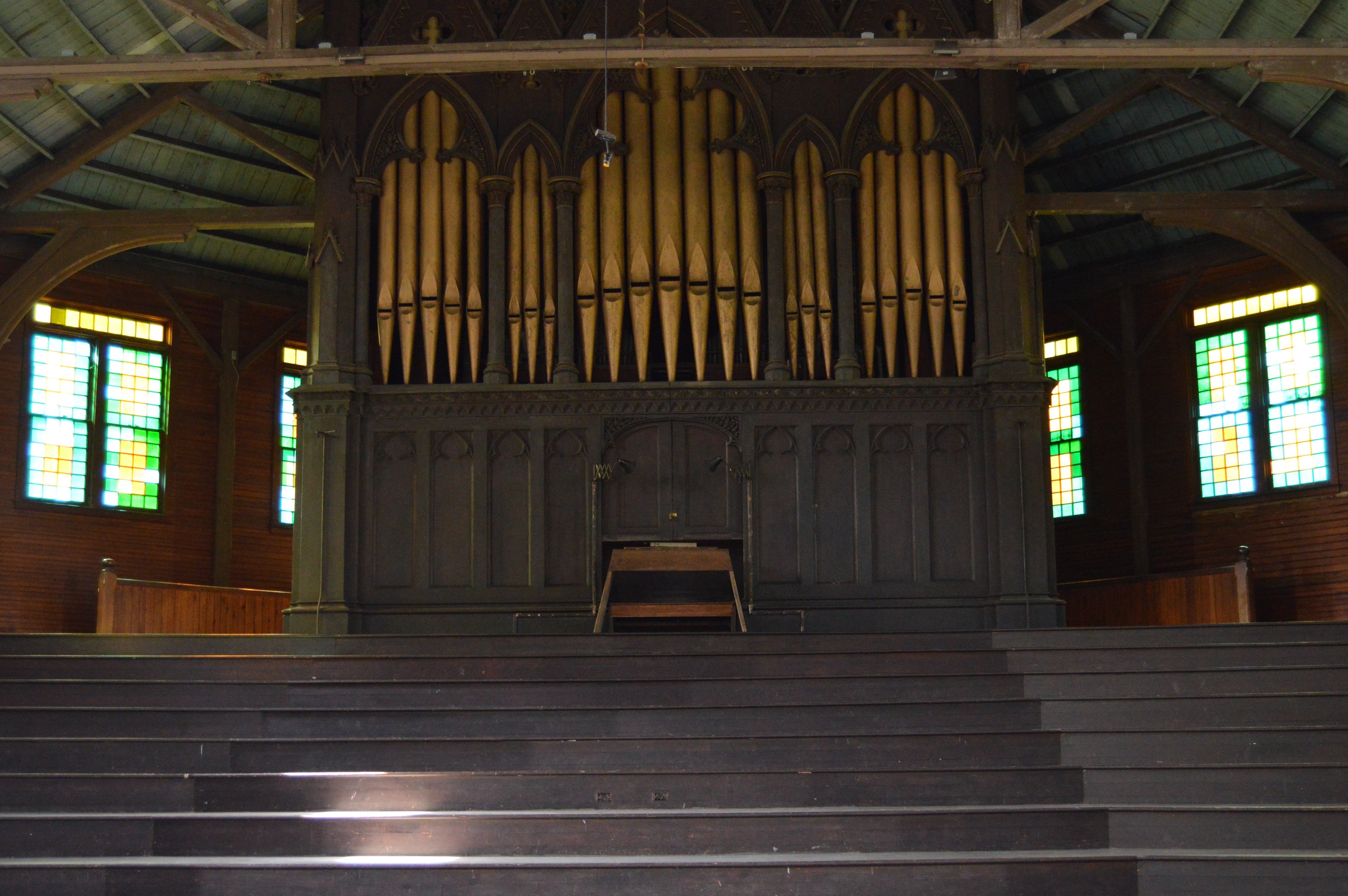 The stately, massive Davis-Ferris Organ was built in 1847 for $2,500 and sat in Manhattan’s Calvary Episcopal Church until 1888, when it was purchased by a Methodist camp for $1,500 and moved to a town auditorium in Round Lake, a village in upstate New York that has been on the National Register of Historic Places itself since 1975. The instrument features pipes wide enough for a small child to crawl through, earned the approval of the National Parks Service in 2016. It’s said to be the oldest and largest organ of its type. (For any organ aficionados out there, that’s a three-manual organ, to be specific.)

A.W. Tillinghast, who passed away in 1942, is the Frank Gehry of golf courses. He designed more than 265 of them throughout his prolific career, and the 36-hole golf course at Baltusrol Golf Club in Springfield, New Jersey, which was completed in 1918, is often seen as one of his greatest achievements. In 1919, Golf Illustrated wrote, "What they are planning at Baltusrol is on a vaster scale than anything that has ever been attempted in American Golf.” It’s since played host to numerous professional tournaments, including seven U.S. Opens and two PGA Championships.