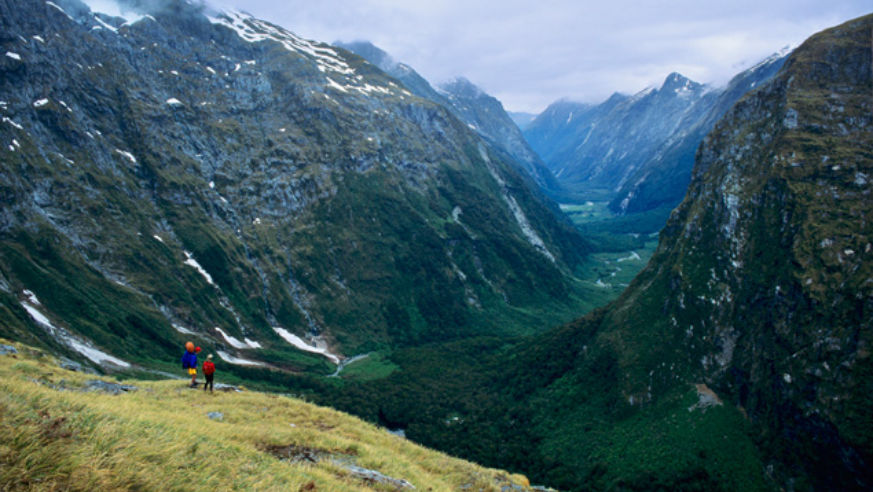 Put away the car keys: These scenic routes are meant to be traveled on your own steam. Whether on foot, bike, or skis, taking your time only elevates the experience of visiting some of the world's most beautiful spots.

With all due respect to road trips, some of the world's most breathtaking routes aren't fit for four-wheel drives. And they're better off for it. After all, aren't the world's most beautiful views best absorbed at your own pace? These 12 gorgeous trails, paths, and passageways let you do just that—from the saddle of a bicycle, a pair of skis, or your own two feet—without any impatient drivers looming in your rearview mirror. You don't even have to worry about planning the trip—outfitters run road-tested tours through all of these gorgeous spots.

SEE THE GORGEOUS SCENERY ALONG THESE TRAILS

High in the Andes, this 26-mile journey follows in the footsteps of fifteenth-century Incans, leading past a series of ruins to the mystical royal retreat of Machu Picchu. Hundreds of species of exotic flowers (including nearly 200 types of orchids) and tropical birds (giant hummingbirds, tanagers, and Peru's national bird, the bright-red-headed cock-of-the-rock) can be seen along the way. Ancient stone stairs line the path as it leads up through cloud forests and alpine tundra, until the clouds part and the massive Puerta del Sol—Sun Gate—reveals the stunningly preserved granite city of Machu Picchu.
Book a Trip: Access to the trail is limited (for preservation purposes), so it's best to reserve your trek well in advance (4-6 months in the high season of May-October). SAS Travel Peru's four-night trek includes bus transport from Cusco, all meals, tent accommodations, and porter service throughout (sastravelperu.com, four-night treks from $610/person).

Cutting through 14 states on the Eastern seaboard, the 2,180-mile "A.T." is one of the longest continuously marked trails in the world, taking in a greater variety of scenery than any other path on the continent. The route starts in Georgia's rugged green Chattahoochee-Oconee National Forest, winds up through the vast valleys and peaks of the Great Smoky Mountains and Shenandoah National Park, then crawls through bucolic New England towns before ending in Maine's incredibly isolated Hundred-Mile Wilderness, one of the most likely spots in the country for moose sightings.
Book a Trip: The Appalachian Mountain Club arranges three- and four-day hikes across New Hampshire's White Mountain segment of the trail, a swath of Alpine tundra best experienced when its high-altitude wildflowers are in full bloom (mid-June through September). Trips are led by staff naturalists and include meals, seasonal activities like bird-watching, skiing, or snowshoeing, and accommodation in rustic mountain huts (outdoors.org, three-day hikes from $316).

This dramatic gorge cutting through Zion National Park claims a close second place behind the Grand Canyon for sheer, jaw-dropping canyon beauty, yet draws just over half of the more famous park's annual crowds. The path through the gorge—home to some of the world's deepest slot canyons—alternates between gaping, quarter-mile-wide stretches and narrow, 20-foot passageways, and runs directly through the Virgin River's bed—which means hikers who want to go the distance will have to ford waist-deep water from time to time. Still, Zion's fans believe it's worth the wade to stare up between the 2,000-foot-high sandstone walls, lined with lush hanging gardens, streaming with flutes of water, and bouncing with beams of red-orange light.
Book a Trip: If you're not the type to wander through canyons on your own—or all that keen on waist-deep wading—the pros at Zion Rock Guides lead beginner-level full-day (dry) hikes that include a stop for lunch and ice cream at the in-park Zion Lodge (zionrockguides.com, from $90).

The pine-forested Bitterroot Mountains (part of the Northern Rockies) supply the deep-green backdrop for one of the country's most exhilarating rails-to-trails bike-path conversions (completed in 2001). This former stretch of mountain railroad straddling the Idaho-Montana border incorporates 10 covered tunnels (including one, the Taft Tunnel, that's more than a mile and a half long), seven dizzying, canyon-spanning trestles (some as high as 230 feet), and panoramic views across both states. Bonus: The 15-mile gravel trail is mostly flat or slightly downhill, so the smooth ride is doable for most kids and families. (Just be sure that your bike has a headlight for those dark tunnels! It's not only recommended—it's required.)
Book a Trip: If you prefer to go it alone, day passes cost $10 through Lookout Pass Ski and Recreation Area (skilookout.com); less-experienced cyclists might opt for a guided tour from Row Adventure Center, which includes a picnic lunch and transportation from Coeur d'Alene, Idaho (rowadventurecenter.com, from $179).

Consider it the other great American backpacking path: The 2,600-mile Pacific Crest Trail spans the entire West Coast, from the Mexico border to British Columbia. Along the way, hikers pass through 25 national forests and seven national parks, taking in everything from the vivid red Vasquez Rocks near Los Angeles to the deep blue waters and snowcapped peaks of Crater Lake in Oregon. Not to mention Yosemite, Sequoia National Park and the Sierra Nevadas in between. The parallel Sierra Cascades Bicycle Route provides a path for two-wheelers.
Book a Trip: Newbies can hook up with the hardcore hikers who are tackling the full trail on Next Adventure's four-day, 32-mile hike along the Oregon Section of the Pacific Crest Trail (nextadventure.net, $400). Guides lead small groups through Mt. Hood National Forest, and all gear, meals, and snacks are included.

This 52-mile trail loops through a section of southern Patagonian wilderness that contains some of the most otherworldly scenery on the planet. Giant blue glaciers and craggy mountain peaks are in abundance here, but the most spectacular formations in this national park are the namesake paines—10,000-foot pillars of granite that spiral up from the glacial-carved valley. The challenging hiking circuit also traverses past green lagoons and expansive ice fields—and if the landscape itself weren't enough, eagle-eyed hikers can spot exotic wildlife (llama-like guanacos, ostrich-esque rheas) roaming the grassy pampas.
Book a Trip: Cascada Expediciones offers a five-day, four-night highlights trek; most nights, hikers stay in geodesic eco-domes equipped with sheepskin throws and windowed ceilings for midnight star-gazing (ecocamp.travel, from $1,313).

Five colorful villages carved into the cliffs of the Italian Riviera are connected by a series of fifteenth-century footpaths winding directly above the Mediterranean. With autos on these ancient roads still few and far between, this is one of the few places where hikers can still travel car-free through the heart of Old Europe. The scenic vineyards, olive groves and fruit orchards lining the steep cliffs along the trail are bested only by the historic towns themselves, each one filled with centuries-old churches, postcard-perfect homes and high stone walls that cling to the rocks above the sea.
Book a Trip: Seven-day treks from UTracks make the central town of Corniglia your base—travelers stay, local-style, in rental apartments—with daily excursions to the surrounding villages and breaks for vineyard tours and swimming (utracks.com, from $860).

One of Europe's last swaths of genuinely pristine wilderness lies more than 100 miles north of the Arctic Circle. Here, the narrow hiking and skiing path known as the Kungsleden, or King's Trail, is the singular sign of civilization along much of the route. For wintertime skiers the 270-mile route is a snow-swept wonderland; for summer hikers the untouched birch forests come alive with multi-colored flowers blooming under the midnight sun.  Either way, you're likely to encounter herds of wild reindeer—and have  an excellent chance of seeing the Northern Lights.
Book a Trip: The eight-day trip led by Nature Travels is rife with extra-special experiences—sauna stops, a boat ride across Lake Ladtjojaure, and the option to add an excursion up 6,906-foot Mt. Kebnekaise, Sweden's highest peak (naturetravels.co.uk, eight-day trips from $1,100).

For folks who take equal pleasure in viticulture and vélo-culture, there's no better bike path than "the road of great wines," a 40-mile route through the heart of Burgundy's famed Côte d'Or (golden slope). The road is lined by a procession of intimate, family-run wineries set along a southeast-facing limestone slope, which is the reason these vines get so much sun (and produce such great wines). The occasional castle punctuates the surrounding landscape. What's more, it's virtually impossible to get lost, thanks to the no-French-necessary road signs stamped with pictures of grapes that are planted all along the route.
Book a Trip: The four-night trip offered by Detours in France includes bike rental, luggage transfers, hotel accommodations, breakfasts, two dinners, a wine-tasting meal and private tour of the Gothic Hospices de Beaune, built in 1443 (detours-in-france.com, from $857).

If you like long walks on the beach—and we mean really long walks—South Africa's 34-mile Whale Trail is sure to float your boat. The first half, which starts in the Potberg mountains of the De Hoop Nature Reserve, winds east down the verdant green hillsides toward the water; all along the way, trekkers gaze down on the turquoise rock pools and craggy cliff formations that make up this stretch of Indian Ocean coast. Once you hit the ocean, the trail doubles back west, with 17 more miles of secluded, sandy beaches, tide pools, and sea caves. Both segments of the trail have excellent vantage points for the star attraction—abundant southern right whales that populate these waters between June and December. During those months, hikers routinely report seeing 50 or more whales at a time, and some tour operators (like Karoo, below) have a money-back guarantee if you don't spot at least one.
Book a Trip: Karoo Tours' six-day hikes include transportation from Cape Town, accommodation in rustic cabins, and all meals (www.karoospirit.co.za, from $555).

To many folks—including, presumably, Lord of the Rings director Peter Jackson, who filmed his trilogy there—New Zealand is the ultimate destination for dreamy, fantastic landscapes. The ecologically-diverse Milford Track, which cuts through Fiordland National Park, on the westernmost section of the South Island, is like a sampler platter of the country's most outstanding outdoor offerings. The 35-mile route swings through temperate rainforest, alongside rushing rivers and waterfalls, across wetlands vivid with ferns and moss, and over a narrow alpine pass. But the trail's primary attractions are its magnificent fjords—dramatic, V-shaped valleys carved out of the mountains by glaciers roughly 20,000 years ago.
Book a Trip: Guided hikes on the Milford Track don't come cheap: Ultimate Hikes' five-day option includes all meals and snacks, accommodations in cushy lodges, and a cruise on Milford Sound, and starts at $1,488 per person (ultimatehikes.co.nz). If you'd rather strike out on your own, Hike South's self-guided option might fit the bill, with three nights' accommodation in unheated conservation huts for $276 (hikesouth.com). Just be sure to reserve your spot in advance—by several months, if possible—as access to the trail is limited to 90 new hikers per day.

An elaborate network of mountain and jungle roads built by the North Vietnamese to provide support to troops down south during the Vietnam War, this legendary trail runs the length of the country, winding more than 1,000 miles from Hanoi to Ho Chi Minh City. While segments of the road have since been reclaimed by jungle, the entire route is navigable by motorbike via secluded dirt paths that wind around vertigo-inducing mountain passes where stilted wooden houses are perched on the green mountainsides; through isolated ancient villages; and down to sandy stretches of uninhabited coastline.
Book a Trip: Vietnam Adventure Tours has an 18-day, full-trail option, as well as a 3-day, all-inclusive "Taste of Ho Chi Minh" itinerary that offers homestays in Thai stilt houses and in a Muong village (activetravelvietnam.com, 3-day trips from $363).