The "Starry Night" Bike Path Is Like Nothing You've Ever Seen 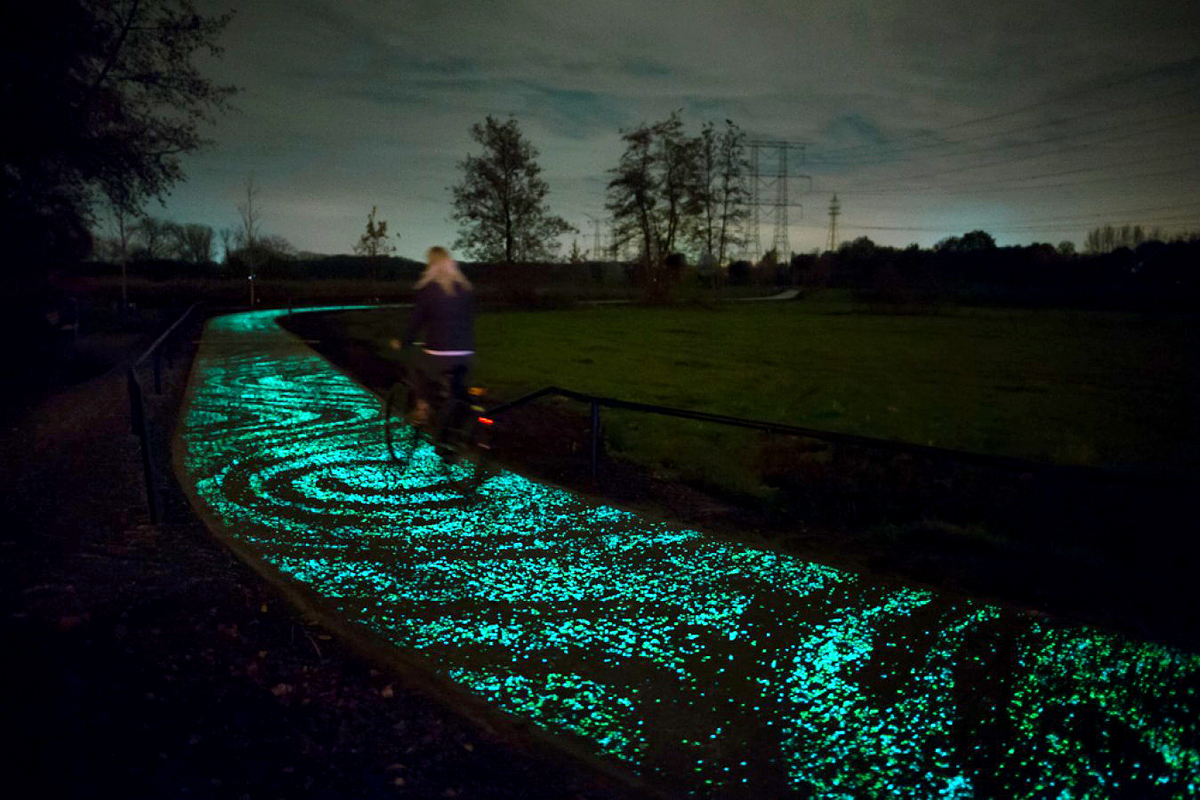 What's your favorite painting? Hold that image in your mind for a sec, then imagine the brushstrokes, shapes, and colors brought to life—so you could actually walk right in. Whoa. Right?

Dutch artist Daan Roosegaarde has brought my favorite painting to life in a unique way that melds contemporary technology with a masterpiece of 19th-century art: Vincent Van Gogh's "Starry Night." The Starry Night Bike Path, a winding half-mile in the city of Eindhoven that is illuminated by thousands of LED lights and special paint, interprets the swirling shapes and colors of Van Gogh's painting. I don't know about you, but for me the work of Van Gogh is highly personal—as if the artist, with his dramatic strokes and thick layers of paint, is reaching out to me across the years, teaching me a new way to see and feel. I'm psyched that a contemporary artist is attempting to transport an audience in a similar way. Roosegaarde has spoken enthusiastically about how the path, which opened to the public on November 13, makes a statement about technology and cultural history—and is also a popular spot for first dates. What's not to love?

Van Gogh's original "Starry Night,"which he painted in 1889 while in an asylum in Saint-Rémy, France, is on display in New York City, not far from the Budget Travel offices, at the Museum of Modern Art. It is the museum's most popular work and, for me, it's up there with the Statue of Liberty and the Empire State Building for must-see NYC attractions.

The city of Eindhoven, where the Starry Night Bike Path is located, was Van Gogh's home for a few years and appears as a backdrop in some of his paintings. These days the city of more than 200,000 is a major technology hub (the Philips electronics company was founded there) and boasts major museums, theaters, and miles of bike paths. Eindhoven is about 90 minutes from both Amsterdam and the Hague.

If you don't happen to be in the Netherlands at the moment, pretend you're cycling or strolling on the Starry Night Bike Path with this video! 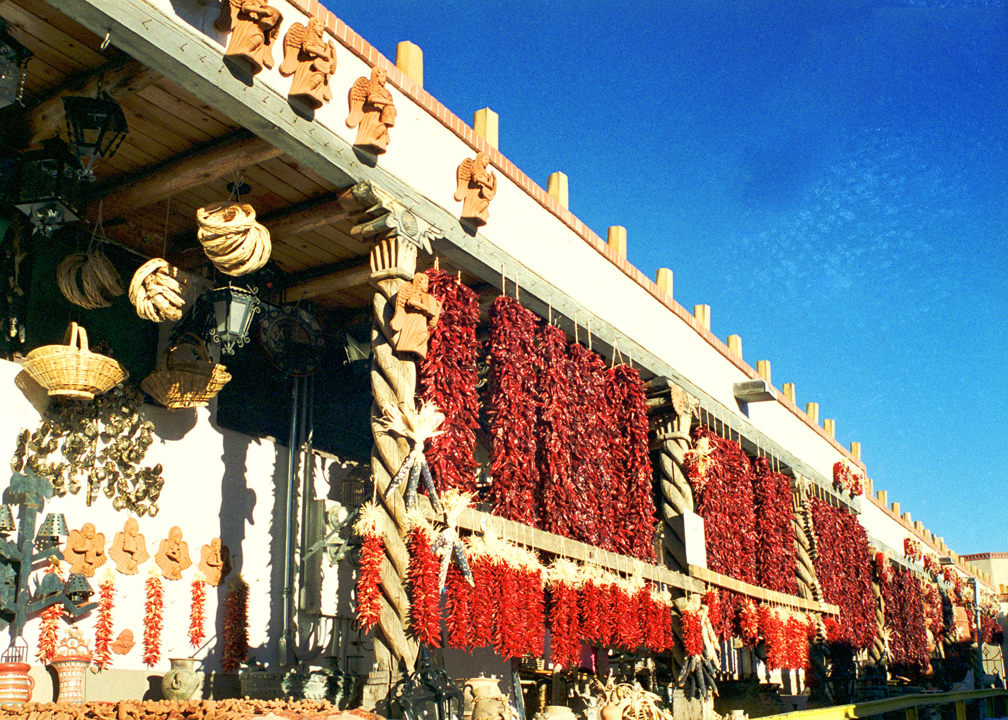 Easy Southwestern Cocktail Recipes You Can Make at Home

Would you like some heat with that ice-cold drink? Chile peppers are as ingrained in New Mexico's food culture as fresh pasta is in Rome's. Fact: "Red or green?" is the official state question, in reference to when a waiter asks what sauce you'd like on your enchiladas—or chilaquiles, or breakfast burritos... You get the idea. (Answer "Christmas" if you want both.) New Mexico's chiles are mostly grown and harvested in southern New Mexico, in and around the village of Hatch, a.k.a. The Chile Capital of the World. The early fall months are the only time you can get the chiles fresh, so locals buy them by the pound, roast them, and freeze them to cook with throughout the year. Fun trivia: Green chile peppers are simply unripened versions of red chile peppers. New Mexico is so serious about its chiles that there's even a Chile Pepper Institute in Las Cruces, New Mexico, which promotes chile pepper research and education. You can visit the teaching garden, where more than 150 varieties of chiles are grown, June through October for free. Santa Fe hotel and restaurant La Fonda on the Plaza is paying homage to the beloved pepper with its new chile drink menu—and you can make them at home! Local boutique The Chili Shop sells red chile powder by the bag in mild, medium, medium hot, and extra hot both in store and online (from $5.75). Click "add to cart" and get ready to feel the burn. 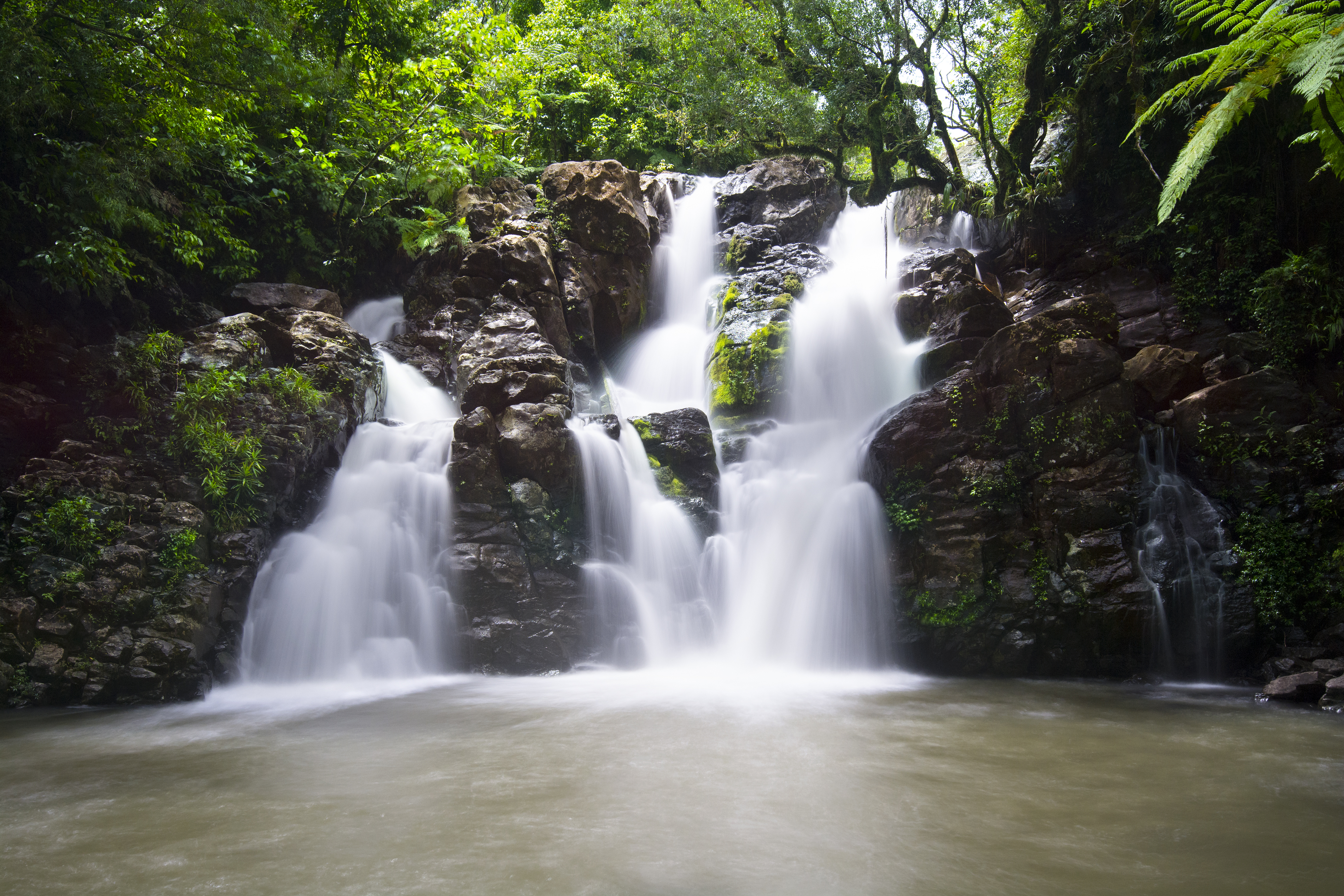 It's Island Time, and Fiji Is Calling Your Name

What's on your mind? If you're like most Budget Travelers, as the temps go down your thoughts turn to… islands! We recently named Fiji one of the 10 Most Romantic Islands in the World, and we're putting our money where our mouth is by making the South Pacific paradise even more affordable than ever: We're giving away a trip for two. The winner will receive a flight from Los Angeles to Fiji and five nights' accommodations, including breakfast, at Sofitel Fiji Resort and Spa on Denarau Island (where you can indulge in spa treatments, water sports, or just relax on a private beach). ENTER HERE Of course, we're not the only ones who love Fiji—it's the most popular destination in the South Pacific, welcoming more than 600,000 visitors each year. The string of islands offers fine Indian and French cuisine, jungle cruises, incredible wildlife (including some of the world's most colorful birds), gorgeous waterfalls, and of course miles of perfect beaches. And it all comes with a reasonable price tag thanks to affordable resorts and the appealing prices and exceptional service of Fiji Airways. Have you been to Fiji? We'd love to hear about your trip—drop us a line in the comments below or on Budget Travel's Facebook, Twitter, or Instagram pages! 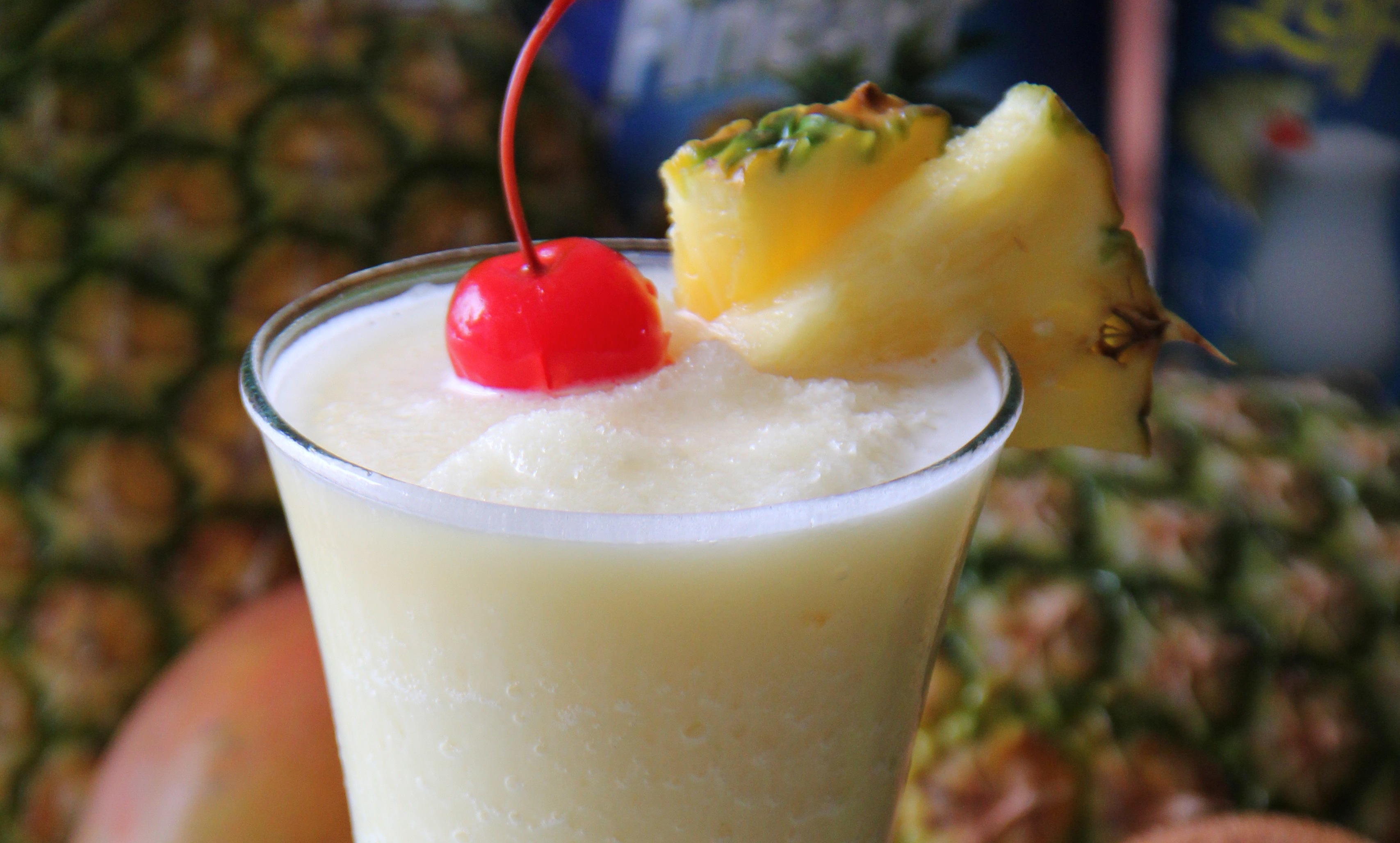 Say "piña colada." It rolls off the tongue nicely, doesn't it? And you might as well have said "party!" Did you know that the iconic tropical drink was originally created at Caribe Hilton, in Puerto Rico, in 1954 by bartender Ramón "Monchito" Marrero? The creative mixologist whipped up the classic and continued to serve up the tasty blend of rum, coconut, and pineapple until his retirement in 1989. The drink is now the official drink of Puerto Rico (which is one of our favorite affordable indulgences in the Caribbean). To say "happy birthday" to the signature beverage, Hilton is rolling out a deal from November 17 through 23 that allows guests at select Hilton properties to enter to win a six-day/five-night stay at Caribe Hilton along with travel/airfare for two. Just as exciting—or maybe even more so!—is that rooms at the gorgeous Caribe Hilton start at $99 per night, putting a luxurious Caribbean vacation well within reach this winter! Caribe Hilton's Oasis Bar, where Marrero first concocted his sweet, icy libation, will be serving the original recipe plus some contemporary riffs throughout the year. The hotel will also offer mixology classes, sweepstakes, and more. Thirsty? Get out your blender! Here's the ORIGINAL piña colada recipe, as perfected by Ramón Marrero in 1954. Enjoy it (responsibly) with friends the next time you're browsing BT's tropical eye candy (for starters, check out Senior Editor Jamie Beckman's "10 Most Romantic Islands in the World!"). THE ORIGINAL 1954 PINA COLADA RECIPE Serves 1 Ingredients:   2 oz White Rum1 oz coconut cream1 oz heavy cream6 oz fresh pineapple juice ½ cup crushed ice     Directions: Pour the rum, coconut cream, heavy cream, and pineapple juice in a blender. Add the ice and blend for about 15 seconds or until smooth. Serve in a 12-ounce glass. Garnish with a fresh pineapple wedge and a maraschino cherry. 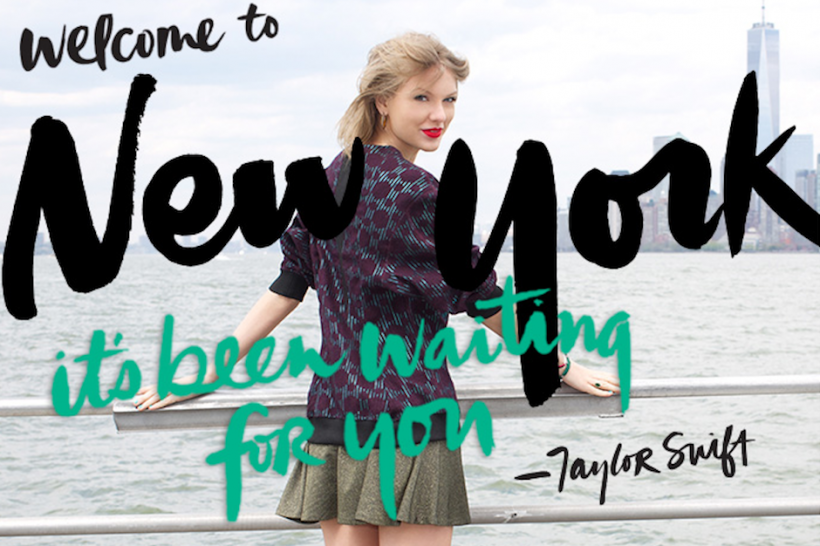 Is Taylor Swift the Right "Global Ambassador" for NYC?

We're still getting our brains around the exciting—but somewhat counterintuitive—notion that pop star Taylor Swift was named New York City's Global Welcome Ambassador. She'll be representing the "Welcome to New York" campaign, named after a hit song on her new album, 1989. What do we think of the seven-time Grammy-winning native Pennsylvanian representing NYC to the world? After all, Budget Travel is based in New York City, and I was born in the Bronx. Of course, most of our staff, like Swift herself, grew up in other parts of the U.S. It turns out most of us (me included!) are huge fans of Swift's clever and heartfelt songwriting—"Trouble," "Back to December," and the mega-mega-mega hit "Love Story" are just a few obvious examples of her craftsmanship and emotional commitment. But we can't help noticing that she's, um, not exactly Derek Jeter, Lady Gaga, Billy Joel—somebody deeply enmeshed with the city's image and culture. That said, New York City has been welcoming out-of-towners for a few hundred years now. Heck, a few years back we even elected a native Chicagoan who'd spent most of her adult life in Arkansas and D.C. as one of our U.S. Senators. You may have heard of her: Hillary Clinton. So, after a lively discussion of the pros and cons of the decision by NYC &amp; Company (New York City's official marketing, tourism, and partnership organization), Budget Travel says, "Welcome, Tay-Tay!" However much she's associated with her country-music roots, Swift's towering presence in popular music qualifies her as a citizen of the world—which would make her an honorary New Yorker even if she didn't have swanky digs right here in town. What do YOU think? Post your opinions on Budget Travel's Facebook or Twitter pages with the hashtag #W2NY: (a) Taylor Swift is a great choice to represent New York City! (b) Hmm. I have a few questions... (c) Seriously?!?!?!?.