Vintage Travel: Eating at the Airport in 1941 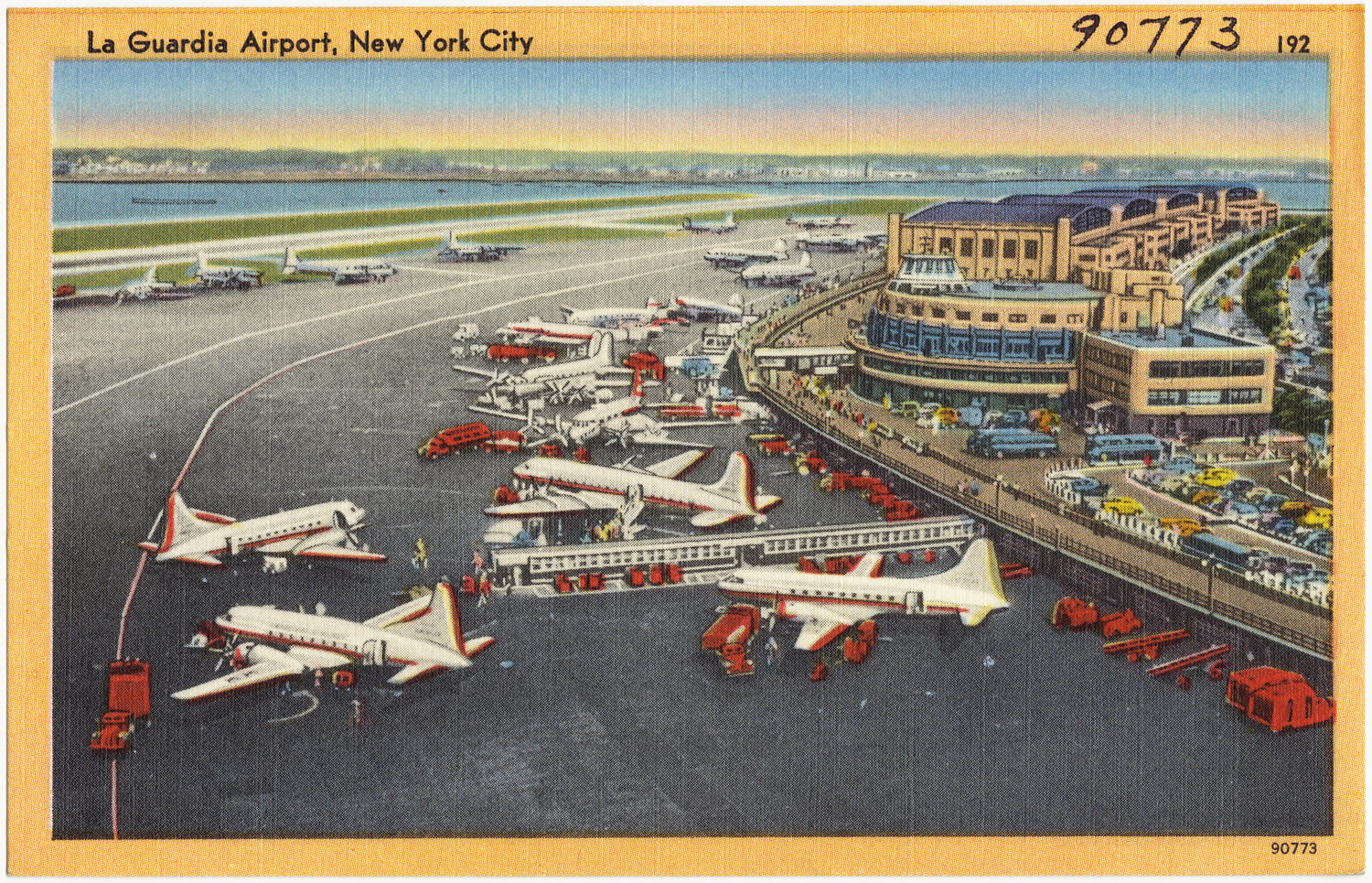 Many flyers lament the bygone glamour of air travel, when people wore their Sunday best and midflight meals were served on silver trays. Thanks to a menu posted from the New York Public Library's archive, we can now also wax nostalgic about what it was like to dine at the airport back in 1941.

The La Guardia Coffee Shop was operated by the Hotel New Yorker, an Art Deco hotel in midtown that still stands. There were likely few other options at the airport at the time, since it was just an airfield in the 1940s, not the behemoth hub it is today.

The menu is a treasure trove of outdated dishes (who ordered the diced tongue omelette?). But what really caught my eye were the Budget Luncheon specials, including a veal shoulder meal with vegetables, potatoes, fruit, and jello topped with whipped cream (it also came with coffee and bread and butter). This could be yours for all of 45 cents. According to the inflation calculator offered by the Bureau of Labor Statistics, 45 cents in today's money has the same buying power as $7.08. You'd be lucky to get a soggy sandwich at the airport for $7 these days, let alone a full hot meal.

The other great tidbit was the classic cocktails. You can almost see the bartender shaking up Airway Cocktails (apple jack, gin, and lemon juice) for weary travelers stuck on a long layover or nervous about their first flight. Those cocktails didn't come cheap, though. They cost a relatively pricy 25 cents. 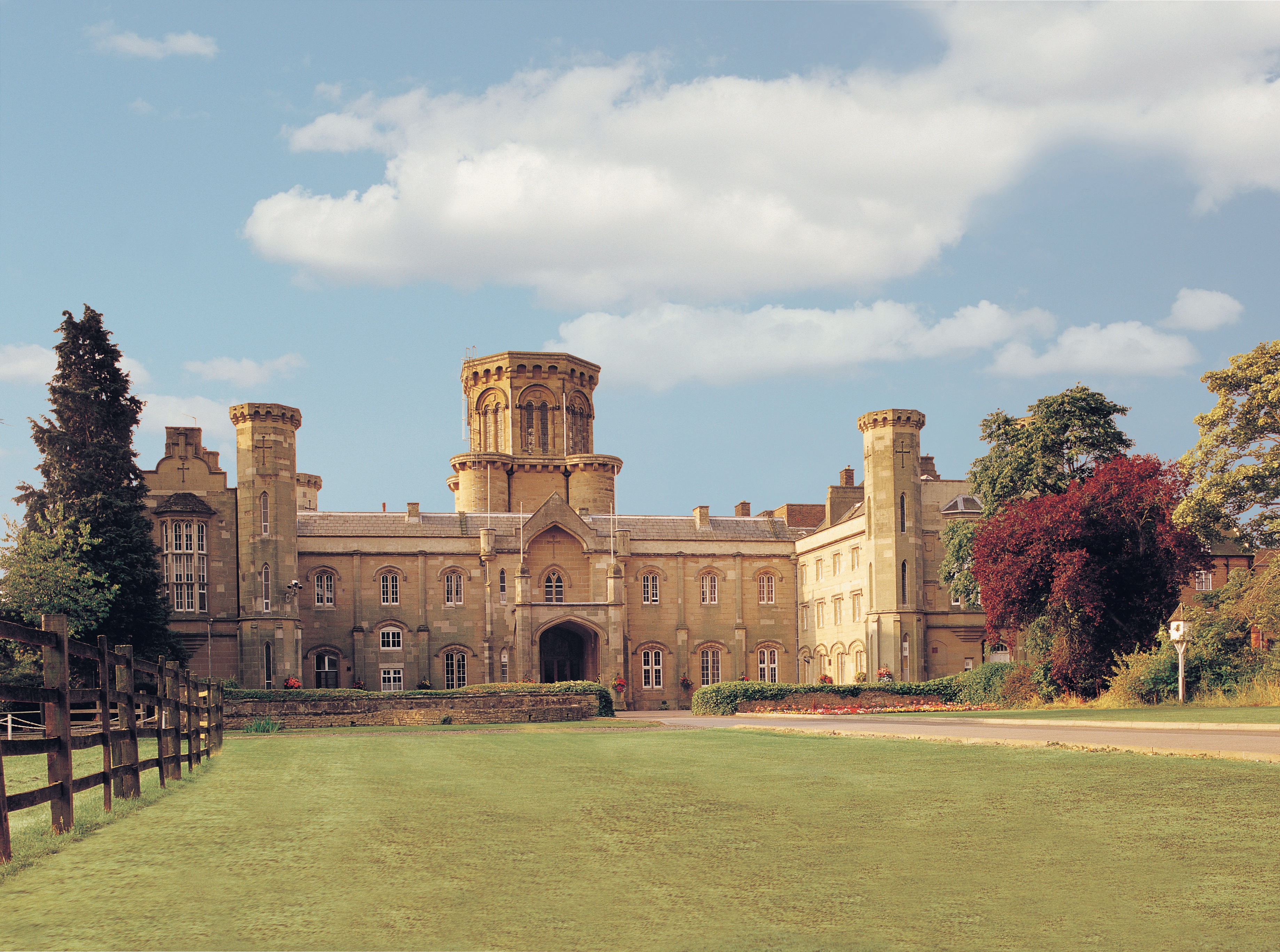 With over 4,000 properties, it's one of the biggest hotel chains in the world—chances are, you've stayed in a Best Western at one time or another (or at least considered it after running an Expedia search). When it comes to such a big franchise, it can be tough to distinguish one outpost from another. When I hear "Best Western," the images that come to my mind tend not to be converted historical buildings, opulent furnishings, or so-close-you-can-almost-touch-it beach views. But these are exactly the features that distinguished the winners of Best Western's first Fan Awards. After over 30,000 votes were cast, the crème de la chain ranged from a more than 125-year-old converted barracks on the banks of the French Riviera to a skyscraper in Shenzen, China whose interior walls are adorned with dragon carvings. Take a look at the winners, listed below: how many of them would you have guessed were chain hotels? Situated on 28 picturesque acres in Warwickshire, England, The Best Western Studley Castle Hotel was named Most Unique. The BW Solar Porto de Galinhas is located right on the sand in one of Brazil's most famous beach towns. It took the top spot in the race for Most Beautiful Hotel Setting. Housed in a building that first operated as an inn in the 13thcentury, the more than 800-year-old BW Angel &amp; Royal Hotel in Grantham, England was tough competition for the title of Most Historic Hotel. The family-run, 64-room Best Western Hotel Prince De Galles is located a hop, skip, and jump away from one of the world's premier playgrounds for the rich and famous: Monaco. Voters in the BW poll considered it to have the Best View from a Hotel Room. Shenzhen, China's BW Shenzhen Felicity Hotel scored the top spot for Most Impressive Lobby with its muli-story, gilded entryway. A golden clawfoot bathtub in a Best Western? The brass soaker, along with floor lighting and a four-poster bed, earned the BW Plus Swan Hotel in Wells, England, the Most Impressive Guest Room title. With skylights and a modern, split-level layout, the BW Hotel Spring House in Rome was deemed to have the Most Unique Guestrooms. Do boutique-style touches have an effect on your opinion of chain hotels? MORE FROM BUDGET TRAVEL 26 Gorgeous Hotels You Won't Believe Are Under $150 10 Most Visited Cities in the World IKEA Will Build 100 Budget Hotels in Europe 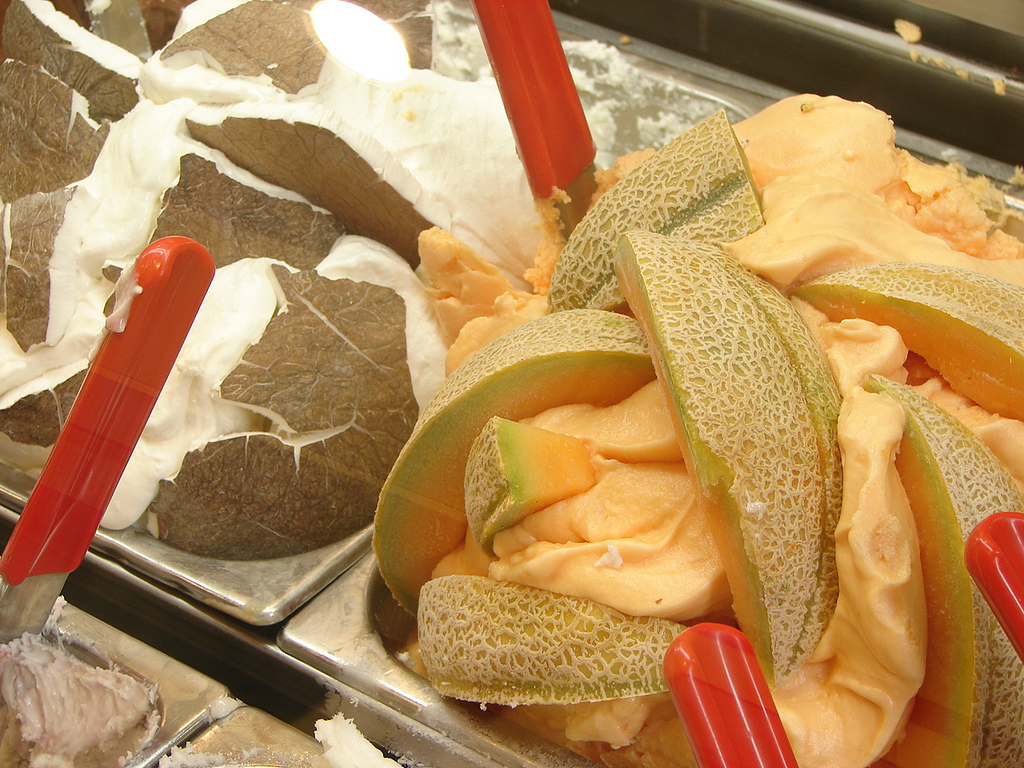 Museums aren't always just about the art. Case in point: the new museum that just opened in Italy devoted to all things gelato. We found five museums in the works around the world that hold artifacts from musical groups and historic battles. And ok, yes, there is one art museum in there as well. Carpigiani Gelato MuseumAnzola Emilia, Bologna, ItalyEating is probably the number one tourist activity in Italy. And rightfully so. The new Gelato Museum was created by a gelato machine company and looks at the history of the frozen treat (it's said to date back to the 1530s). The museum is free to visit, but reservations are required. Alas, no free tastings are offered, but there is a gelato shop on site serving gelato based on recipes that are more than 200 years old.  Jorge M. Pérez Art MuseumMiami, FloridaSet to open next year with a focus on Caribbean and Latin American art, this new museum in Miami will be housed in a 200,000 square-foot building designed by Herzog &amp; de Meuron. Outside will be sculptures and gardens, plus views of Biscayne Bay. The museum will anchor a 29-acre museum complex that will include a science museum, set to open in 2014. Seminary Ridge Museum Gettysburg, PennsylvaniaNext year marks the 150th anniversary of the Battle of Gettysburg, and this new museum will open on July 1, 2013 as part of the commemoration events. Located in a grand brick building that served as a field hospital during the war, the 20,000-square-foot museum will be filled with exhibits on the soldiers and nurses and artifacts like letters, medicine containers, and even bullets. There will also be walking trails around the museum with historical markers. ABBA Museum Stockholm, SwedenThe quintessential 70s group is a national treasure in Sweden, and a museum devoted to the quartet will be part of the Swedish Music Hall of Fame when it opens next spring in Stockholm. Look for elaborate costumes, lyric sheets, and videos about the group. M/S Maritime Museum DenmarkElsinore, DenmarkThis museums isn't technically new-the original dates back to 1915 and is housed in the town's Kronborg Castle. But the extensive collection of maritime artifacts will be housed in new digs starting in June 2013. The bulk of the new building, fittingly, will be underground at Dock 1 in the Elsinore Shipyard and the exhibitions will spiral downward. Where to Stay in Istanbul

Gumusyan Hotel &amp; Restaurant BeyogluThe folks behind this city-center newcomer, opened in October 2010, stripped the century-old residence to its elements. The original brick walls, wood-plank floors, and 130-year-old-walnut slab headboards now lend an authentic patina that newer hotels can only approximate. There's more to this property than just great bones, though. The owners also filled the 14 rooms with a stylish mix of modern furniture (lime-green sofas, Bertoia-style wire-mesh chairs) and classic Ottoman details such as suzani fabrics and Iznik tiles. The hotel has even begun luring locals to its ground-floor restaurant, an upscale take on a meyhane, a traditional Turkish tavern. 9 Asmali Mescit Cad., gumusyan.com, from $119.  House Hotel GalatasarayBeyogluA recent makeover at the hands of urban-cool Turkish design firm Autoban wed the best features of this 19th century building (a sweeping marble staircase, ornate plasterwork) with crisp, contemporary, Scandinavian furnishings. The hotel's 20 guest rooms don't skimp on the creature comforts: king-size, pillow-top beds with goose-down duvets; marble baths stocked with L'Occitane products. But guests may still find themselves haunting the top-floor atrium, where they can lounge on Chesterfield sofas in front of the fireplace or take in the views of Suleymaniye Mosque and the medieval stone Galata Tower. 19 Bostanbasi Cad., thehousehotel.com, from $142.Villa DeniseArnavutköyThe ancient fishing village of Arnavutköy, 30 minutes from the old city by bus, has served as a waterfront retreat for centuries. The last sultans of the Ottoman Empire chose this spot along the Bosphorus for their grandiose hillside homes, and today Istanbul residents make day trips to explore the district's winding cobblestoned streets and celebrated seafood joints. Villa Denise, with its narrow, wallpapered hallways, canopy-draped beds, and tufted fainting couches, evokes the area's haute history—just overlook the odd veneer side table or shabby fixture that tempers the elegance. Two of the five guest rooms have balconies, and all have at least partial views of the Bosphorus. 50 Birinci Cad., villadenise.com.tr, from $144.Ascot Hotel Büyükada At a glance, this 22-room hotel could be just another spruced-up Victorian mansion. Then you notice the neon lights that wash its Doric columns in blue and purple and the Hollywood Regency décor (damask wallpaper, lots of lacquer) in the lobby, and you realize: This hotel is no mere relic. Rooms aim for opulence—most have crystal chandeliers and private balconies—while the large pool, sundeck, and Finnish sauna underscore the resort-escape feel. It's a bit out of the way, on car-free Büyükada island; ferry rides from town take 35 minutes to an hour, depending on the boat. But that's the whole point: You won't find this kind of lost-in-time peace and quiet anywhere on the mainland. 6 Cinar Cad., ascot.com.tr, from $118. 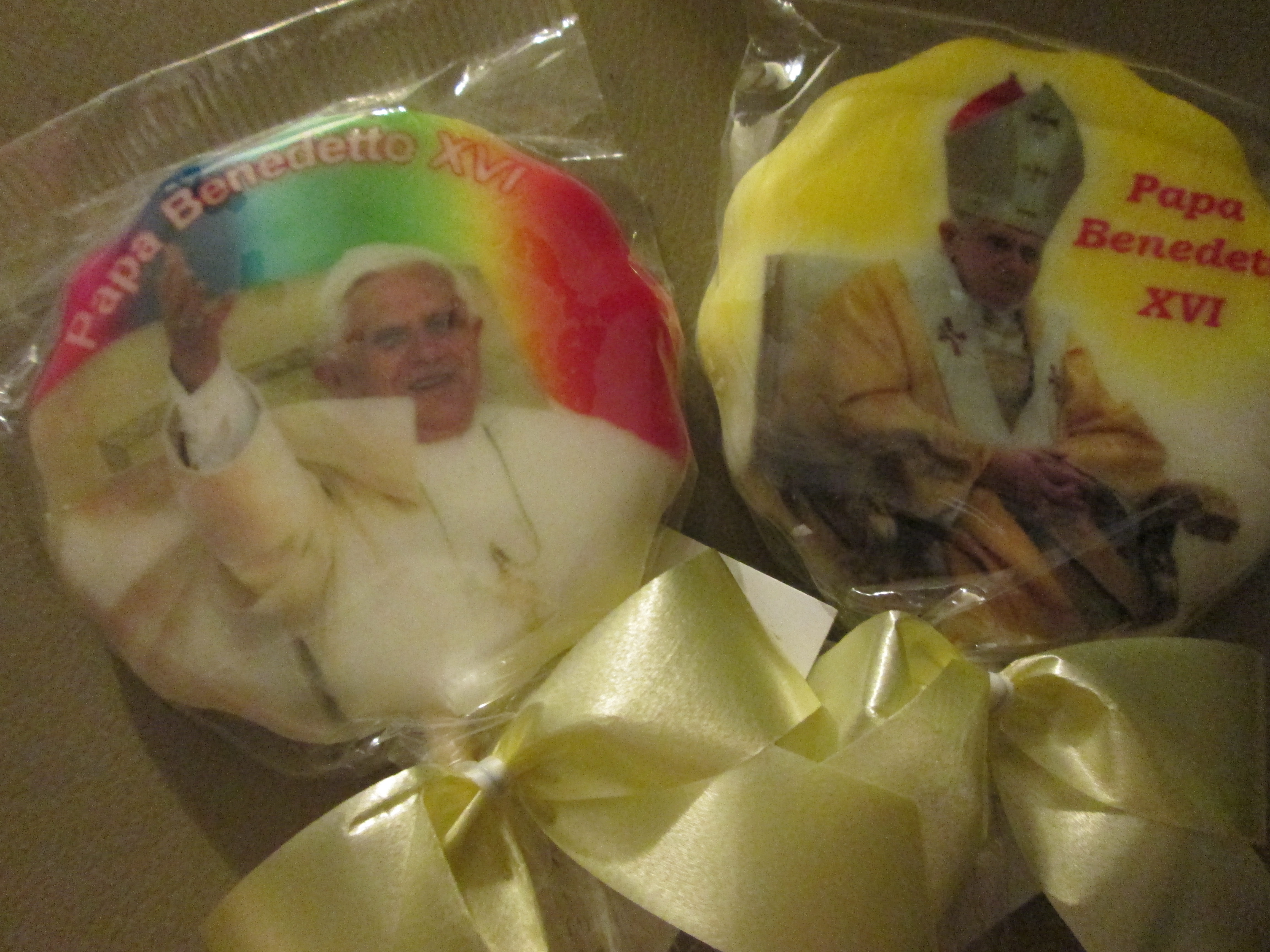 'Tis the season for Halloween candy. And if you think America has cornered the market on weird sweets, think again! What might seem totally standard abroad—something like salty licorice in Scandinavia—can often feel downright bizarre and alien to an American palate.While visiting Hong Kong last year, I bought a bag of assorted candy from a Japanese snack shop called Aji Ichiban. I was expecting the oddest flavor to be something like lychee hard candy. What I found instead were "supreme salted kumquats," preserved mandarin peel, and preserved tomatoes! All of which exceeded my taste expectations. (Luckily, soy sauce duck tongues, which were also being sold in the store as a snack food, hadn't made it into my combo bag.) Here are our staff picks for the weirdest candies from around the world:  Gillian Telling, Editor: My favorite: Plum-flavored chewing gum from Japan. It's tart yet sweet and almost tastes like a perfumed flower. I know I'm not selling it very well here, but it's amazing. If someone nearby is chewing it, you'd be able to smell it's distinct scent within half a block. It's my favorite gum in the world. My other favorite candy in the world is Turkish peppers from Finland. Sweet and salty on the outside, salty and burning hot on the inside.Kaeli Conforti, Digital Editorial Assistant: I couldn't resist a giant colorful lollipop I found in a gelato shop in Rome featuring a smiling, waving Pope Benedict. It was surprisingly sweet with a lemony flavor and made for the perfect souvenir for my friends back home. Danielle Contray, Senior Digital Editor: Wasabi Kit Kats from Japan! A friend brought them back as a souvenir and they were surprisingly delicious.Katharine Van Itallie, Art Director: The weirdest candy I ever ate were chocolate covered ants that my mother brought home—from somewhere—not sure where! She had a great sense of fun. Now it's your turn! Think we missed something truly wacky? Share your favorite weird candy in the comments section below.