Vocre is a new voice-recognition app for iPhones that lets you speak in one language and hear what you said translated into another.

Using the app Vocre (pronounced voh-krey) is supposed to be like having a personal translator with you on your trip. In my tests, I found that the voice recognition is astonishingly accurate, but it seemed too cumbersome to use in most real-world circumstances.

Let's say you're speaking with someone in a foreign country. You are struggling to say something in particular. You open Vocre on your iPhone, choose your gender and the gender of the local you're talking to, pick the language you're translating into, and then say what you want to say—talking into your iPhone. The app will show what you want to say in English. Turn your iPhone in the air, and the device will speak out loud a translation of what you just said.

The app works for translating English into Spanish, French, German, Italian, Japanese, and Chinese (Mandarin). It debuted at a TechCrunch event this week.

The app is free to download but it charges about 10 cents a translation after the first complimentary bunch of translations. The app works with a built-in dictionary. It does not need to connect to the Internet, and your phone is not hit with data charges while roaming in a foreign country. So how do you get billed, you might wonder? Well, you have to buy credits. Each translation costs a credit, and ten credits cost a dollar, which you can pre-pay before you head to your country. But it won't take long in a conversation for the charges to add up.

See the video below for a demonstration of Vocre.

Up until now, the main app in this space has been Jibbigo Translator, which listens to what you say in English and speaks back a translation with written versions. It has a more interesting range of languages than Vocre: Mandarin, Spanish, German, French, Japanese, Korean, Tagalog and Iraqi Arabic. It also has bigger vocabularies in each language, and it doesn't charge you per translation. It's also available in Android, not just iPhone/iPad. $5.

But the usability of Vocre is superior in a lot of situations.

What are your thoughts? Would you ever use a tool like this while traveling?

Instant Translations of Street Signs with Your Cell Phone Camera 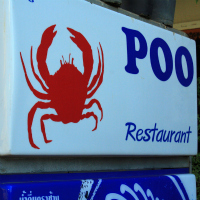 It's named what!?! The worst names for restaurants ever

The world's worst restaurant names? They're picked every year by Zagat, the famous restaurant review site. Zagat was bought last week by the search giant Google for its "useful," "eccentric," and "comprehensive in big cities" restaurant reviews by more than 300,000 patrons. It just so happens that Zagat (pronounced za-GAT with "GAT" like "cat") recently published a list of the world's worst restaurant names. Here are a few of its picks: Rat's Restaurant, Hamilton, N.J. Expensive spot, honoring the rodent character in The Wind in the Willows. Surrounded by Seward Johnson’s life-size sculptures imitating French impressionist Claude Monet's beloved Impressionist paintings. B.A.D. Sushi, L.A. It's hip to have an acronym in the name of your restaurant, which in this case is "Best And Delicious.” The only problem is that, well, it's BAD. if (WIDGETBOX) WIDGETBOX.renderWidget('83bc5d6b-af14-4d6b-b319-b6720755ce4d');Get the Poll Creator Pro widget and many other great free widgets at Widgetbox! Not seeing a widget? (More info)Captain Poo's, Myrtle Beach, S.C. Say the name and you say everything, right? Pink Taco, Century City, L.A. Californians excel at making Mexican food and they excel at marketing everything known to man, so it's no surprise that this Mexican joint with the goofy name is an import from Las Vegas, which tends to get both things wrong. And here are a few more nominations for bad restaurant names: Ruth's Chris Steak House, 130-plus locations across the U.S. Ruth Fertel bought a New Orleans restaurant, Chris Steak House. The contract said she couldn't move the restaurant and keep the name, so when she eventually moved it she added her own name on it. The Dead Fish, Crockett, Calif. The owner's grandmother had a standard reply whenever someone asked her what fish she was cooking any given night: "A dead fish." In her honor, he named the restaurant. Which is a great story, but, still. Blunch, Boston. Supposedly inspired by a restaurant in France called Flunch. But something got lost in the translation. Fuddruckers, national chain, about 200 spots.Love the burgers, hate their name. (Fighting words, I know.) The Fudd is like Häagen-Dazs. It has no meaning, it's merely supposed to catch your attention. Which it does. Like a bad piece of Muzak you can't get out of your head. Doug Lansky, famous for "The Titanic Awards" and "Signspotting," put out a similar list. Here are some names he found: Soon Fatt Chinese Food, Ireland What else is there to add? My Dung, Calif. There are several restaurants named My Dung in California, including one in Rosemead. Go figure. Stomach Clinic Railways Restaurant, Nairobi, Kenya If you're feeling classy, call this by its likely formal name: Gastrointestinal Examination Bistro. Have you ever encountered a badly named restaurant? Let us know in the comments. And vote in our poll on the worst of the bunch. MORE FROM BUDGET TRAVEL: Ask Trip Coach: Top tips for traveling with your pet Slideshow: Readers' cutest pet photos Pet Travel News: A handy app, a Disney resort, and more

Car rentals for $10 a day every weekend through next spring

The latest car rental deal from Enterprise is a doozy, with daily rates of just $9.99 at more than 6,000 U.S. locations. Now and all the way through May 23, 2012, Enterprise Rent-A-Car is hosting a discounted weekend rental promotion in which rates at thousands of locations around the country start at a smidge under $10 per day. That's the rate for economy/compact vehicles, and larger cars are available for a bit more: $14.99 for intermediates, $17.99 for standards, and $19.99 for full-size automobiles. Before getting too-too exciting, note that the main bummer is that these special prices are not available at airport locations. This promotion is strictly available at neighborhood (non-airport) Enterprise lots. There are a couple of other restrictions as well. This is a weekend-only deal, and the best rates are for rentals during Friday-Monday periods. Also, while most car rentals come with unlimited miles, there's a limit of 100 miles per day with this special. Drive over the limit and you'll be hit with an additional charge, probably in the neighborhood of 20 cents per mile. Even so, the deal's pretty fantastic. A three-day weekend special on a compact at a neighborhood Enterprise location in the Fort Myers, Fla., area, for example, would come to an estimated total of $40.02 after mandatory taxes and fees. That same vehicle, rented for the same three-day time period, would total over $140 if the traveler instead rented out of Enterprise's Fort Myers airport location. Similar deals are available all over the country. MORE FROM BUDGET TRAVEL: Deals on Wheels: Peer-to-Peer Car Rentals Wheel Deals: Pros and Cons to Off-Airport Car Rentals Money-saving travel hack: Rent a moving truck instead of a car

Honeymoon travel: How to find an overwater bungalow bargain

Overwater bungalows are an escape fantasy made real, with water lapping under a hut poised on stilts in a serene, aquamarine lagoon. A new site, Overwater Bungalows, makes it easy to comparison shop for a resort where you can walk in your bare feet and admire romantic sunsets out the open door. The site lists every single overwater bungalow in Bora Bora and beyond. French Polynesia offers the most romantic of overwater getaways, but $800 is the typical starting price. Thankfully, Overwater Bungalows has found resorts that are both better priced than Tahiti and still within a belly flop of the ocean. Here are a few for under $300 a night or so, now through January. Panama Near the San Blas Islands, about a half-hour by plane from Panama City (around $70 round trip), the Coral Lodge's six casitas all sit over the water. They boast soaring roofs and creature comforts like Jacuzzis and air-conditioning. The tiny, remote resorts do a marvelous job of re-creating the magical thatched-roof South Pacific look and vibe. 011-507/317-6754, corallodge.com, from $240 a night per couple (including tax of about 15 percent) through October (the off season), and then $263 a night for dates in November through Christmas. French Polynesia, Raiatea A South Pacific bargain, comparatively speaking, can be found at the " target="_blank"&gt;Raiatea Hawaikik Nui Hotel, whose lodgings are 120 miles northwest of Tahiti by speedboat. The lodgings have high ceilings and oversize verandas. Trade winds make up for the lack of A/C. 800/657-3275, pearlresorts.com/hawaiki, overwater bungalows at $291 a night, including tax, for stays during October. French Polynesia, Moorea Popular Moorea (within easy reach of Tahiti by ferry or plane) is home to Club Bali Hai, which arguably invented the overwater bungalow in the 1960s. Says Overwater Bungalows, based on an inspection: "Being perfectly honest, the Club Bali Hai is only a good choice for those who want an affordable and novel accommodation with a stunning view. The facilities are quite dated and will disappoint those who come with high expectations. On the other hand, the location near many other restaurants and bars makes it an extremely easy and cheap place to stay on an island with very few choices in this price category. The location is deep within Cook’s Bay with amazing views of Moorea’s mountains." 877-426-7262, clubbalihai.com, from around $250 a night (including taxes) if you book for a week or so. More gorgeous overwater bungalows can be found at OverwaterBungalows.net. That said, the site's operator, Roger Wade, cautions that "$300 is just a bit below the sweet spot for some really nice places. Those who can go up to $400/night have loads of great options, and even $350/night gets some good choices." Budget Travel Tip: Once you're at these resorts, you're truly at these resorts: They're remote, and dining on-site is usually the only option. So include a budget for food costs as you comparison shop. Another tip: Ask for the most secluded hut because sound carries far over water and you don't want to be hearing your neighbor's sounds. MORE FROM BUDGET TRAVEL How safe is your hotel room safe? Get discounted travel by buying gift cards Solo travel websites worth checking out