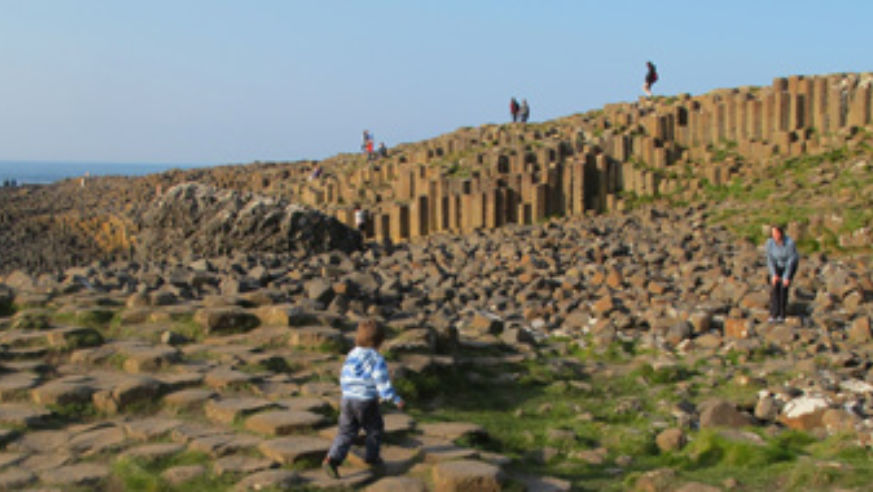 One of our favorite family travel blogs is Wandermom, written by Michelle Duffy. We're especially excited to hear that she'll soon be embarking on a year-long trip with her husband and two young children. (See their global itinerary.)

Recently, Wandermom blogged about her family's spring trip to Ireland. We were curious if she had any more terrific tales from her trip to share. She kindly agreed to share with us the following story:

We're visiting Ireland, and my brother-in-law, Dan, says he's promised my children they'll see a castle, and a giant's causeway.

Soon we were off for a daytrip from Dublin. The trip north on the motorway towards Belfast was speedy. We stopped for a picnic lunch at Slieve Gullion park outside Newry, where the kids had to be coaxed down from trees and high stone walls to eat and I explained to Charlie that 'Slieve' (Shliabh) is the Gaelic word for mountain. Legs and arms suitably stretched and tummies full, we continued north—crossing into the now-very-safe-for-tourists state of Northern Ireland.

We reached the Giant's Causeway in the late afternoon. Bushmills is a scant 60 miles from Belfast. On a clear day, the views across to Scotland are stunning—mists on the Mull of Kintyre notwithstanding.

Even though afternoon shadows were starting to lengthen, the sun was warm and there was no discernable wind as we made our way down to the interlocking basalt columns which make up the Causeway. Tromping over the hexagonal stones all three children scattered in different directions; thankfully there were three adults to follow. I overheard Dan telling Charlie that the water in the stones was giant's tears as I raced towards the headland to catch my younger son who was already on a mission to discover whether or not there really was a sunken bridge at the water's edge. As we heaved our way up the steep hill back to the car an hour or so later, Charlie summed up our visit as only a four-year-old can "That was the best Giant's Causeway ever!"

Tomorrow would be a day for castles.

The history of Dunluce Castle is a tale of battles and chieftains and Earls and ladies—perfect for the imaginations of three young boys who wasted no time disappearing to explore tall towers and stone stairwells and to hang, precariously, out stone windows exclaiming at the steep drop down to the sea below. The second Earl of Antrim Randal MacDonnell and his wife Lady Catherine were the last people to live here, although she apparently, did not like the sound of the sea and was eager to move further inland. Fate provided her with a rock solid excuse to leave when part of the castle kitchen fell into the sea killing a number of the kitchen staff—apparently while the Earl and the Countess were entertaining. I'd say that's the best "dinner party disaster" story I've ever heard.

The Giant's Causeway and the Carrick-a-Rede rope bridge are National Trust properties. Dunluce Castle is in the care of the Northern Ireland Environment Agency.

The Real Castles of Ireland