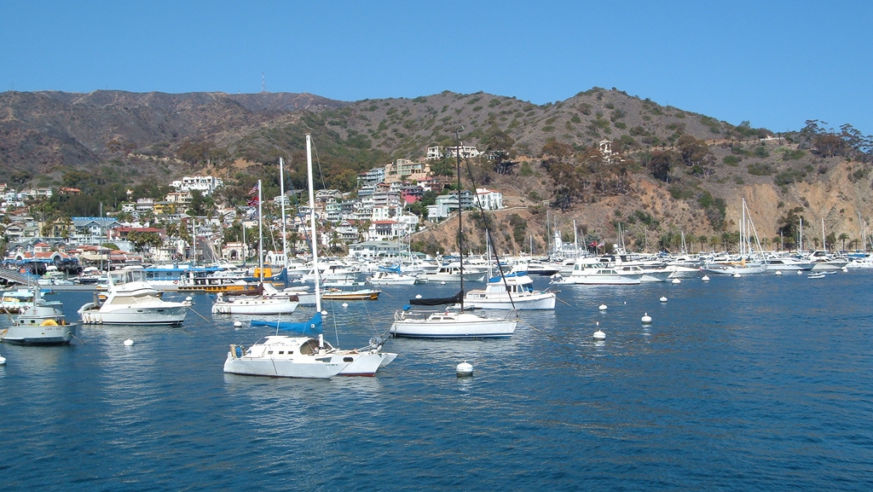 The blue waters off the coast of California's Catalina Island.

The snow is piling up and all you want to do is escape to a warm island? These gems are perfect for a winter vacation—and closer than you think!

You don't need to splurge on a trip to the Caribbean to spend time on the beach this winter. These eight U.S. islands have the sandy shores, seafood shacks, and sunny skies that will have you thinking it's summer—even when there's snow on the ground back home.

TAKE A TOUR OF THE ISLANDS

About as far north as you can go and still be in the Sunshine State, Amelia Island's 13 miles of beaches are mostly deserted until March—so it's easy to find a spot where there are no other people in sight. Horseback riding along the sand is one of the most popular off-season activities. Kids have a blast exploring the nooks and crannies of Fort Clinch, one of the country's best-preserved 19th-century fortifications. It was also one of the last of its kind, as new weapons made brick forts obsolete during the Civil War. Boutiques and lovingly restored Victorian mansions make up the historic district.
Sleep The Seaside Amelia Inn is steps from the beach and has a rooftop terrace perfect for taking in the sunset. Rooms start at just $69 a night.
Refuel Grab one of the umbrella-shaded tables in the courtyard of Joe's 2nd Street Bistro, where the menu leans, naturally, toward seafood.
Easy Escape From Jacksonville (33 miles), Gainesville (101 miles).

Things get hot here, and not just because of the steamy weather. It's home to the Tabasco Pepper Sauce Factory, where you can taste the fiery mixture during the free daily tours. (If you come on a Friday, you won't see the sauce being made, however.) E.A. McIlhenny, son of the company's founder, converted his private estate into a bird sanctuary, which he opened in 1935 as Jungle Gardens. McIlhenny was intent on saving snowy egrets, then endangered because their plumage was popular for ladies' hats. You can still see the brilliantly white birds inside the sanctuary and out. Surrounded by bayous, the mostly undeveloped island is also a great place to spot alligators, deer, and raccoons. You'll want to base yourself in one of the nearby communities; New Iberia, a half-hour drive north, has a good selection of restaurants and gracious homes transformed into B&Bs.
Sleep A bungalow dating from the early 1900s, the Estorge-Norton House in New Iberia is chock-full of antiques. Rates start at $85.
RefuelLandry's Cajun Restaurant specializes in Cajun camp cooking with a menu offering all the classics like gumbo, crawfish etouffee, and oyster po'boys.
Easy Escape From Baton Rouge (85 miles), New Orleans (140 miles).

The three miles of white-sand beaches on this pristine barrier island offer some of the best shelling on the Gulf of Mexico. And because it's a state park, you won't search for sand dollars in the shadow of high-rise hotels. In fact, there's not a single place to stay on the island, unless you count the 108-slip marina. There are no cars, either. Once you disembark the ferry ($14 roundtrip from Honeymoon Island, a short drive from Dunedin), the only way to get around is with your own two feet. Not a bad way, actually, as the boardwalk nature trail passes through stands of mangroves and around sand dunes. As you stroll, you may spot one of the rare gopher tortoises. Kayaking around the bay side of the island is a popular pastime, as the sea-grass flats are populated with ospreys, herons, and other birds. Pack a picnic lunch because there's just one small concession stand on the island.
Sleep You can fish from the dock at the Sea Captain Resort on the Bay in nearby Clearwater, a small city popular with water sports enthusiasts. Winter rates start at $101 through the end of January and at $122 for February through April.
Refuel: On the mainland, very close to Caladesi Island, Dunedin's kitsch-filled Casa Tina serves surprisingly authentic Mexican fare. A local favorite is the Veracruz-style fish, sautéed with tomatoes and onions.
Easy Escape From St. Petersburg (20 miles), Tampa (24 miles), Orlando (103 miles).

You won't entirely escape the state's notorious traffic on this island 22 miles off the southern California coast. But since golf carts are just about the biggest things on the road, you probably won't mind. You can get your own cart through Island Rentals ($40 for an hour rental plus a $40 deposit), but to explore the island's rugged interior, you'll need to rent a two-wheeler from Brown's Bikes ($20 per day) or enlist the help of an outfitter like Discovery Tours. Spotting one of the island's bald eagles, which were almost entirely wiped out by chemical contamination a few decades ago, will put a feather in your cap. The island is an hour and a half from Dana Point on the Catalina Express ferry ($74.50 round-trip), which drops you off at the town of Avalon, a pleasant place for window-shopping. That cylindrical building on the edge of the harbor is the Casino, an art deco movie house that still screens the latest releases.
Sleep On Avalon's main drag, the Hermosa Hotel welcomed its first guests in 1896. Standard rooms start at $75 per night from December through February and $100 March through November. Cottages with their own kitchens start at $100 from December through February and $150 March through November.
Refuel This is California, so the home cooking at Original Jack's Country Kitchen includes free-range chicken, and beef and pork raised without antibiotics or hormones. Sound too wholesome? Try one of the gooey doughnuts from its adjoining bakery.
Easy Escape From Los Angeles (60 miles), San Diego (66 miles).

Still weaving baskets from the sweetgrass that grows wild along the coast, Daufuskie Island's tiny Gullah population—descended from slaves—carefully tends to its traditions. You can take a peek into local life at landmarks like the white clapboard First Union African Baptist Church, built in the 1880s and still in use today. Less than a quarter of this 5,000-acre island has been developed, leaving plenty of open spaces to explore. (And we mean exploring by foot or by golf cart, as no cars are allowed.) One especially nice excursion point is the Haig Point Lighthouse, which has a tower extending from the roof of an antebellum-style house.
Sleep As you might guess, Daufuskie isn't an all-inclusive-resort kind of place. A good option is the two-bedroom Daufuskie Island Cottage, a vacation-rental property that's on a quiet dirt lane in the historic district. In January and February, the rate drops to $115 (two-night minimum), including use of a golf cart.
Refuel There's nightly live music at Marshside Mama's, which one local calls a "put-your-feet-up place." The ladies in the kitchen ladle out a tasty low-country gumbo.
Easy Escape From Savannah (44 miles), Charleston (116 miles).

When Hawaiians talk about Molokai, they often say it's "how the islands used to be." It's true that there are no traffic lights or sprawling hotels. The least visited of the major Hawaiian islands has a rugged northern coast with the world's highest sea cliffs, a southern coast that gently wades into the sea, and a rocky interior punctuated by three extinct volcanoes. The biggest town, Kaunakakai, has barely 7,000 people, along with a three-block-long main street and a tiny airport. The top tourist attraction is the former leper colony in what is now Kalaupapa National Historic Park, a peaceful place reachable only on foot or by mule. The scenery is exhilarating, and the remaining buildings, such as the pair of squat churches, are thought-provoking. There's also a nearly endless string of beaches, including the lovely Papohaku, a three-mile-long stretch of glimmering gold sand.
Sleep Lodgings are limited and can be expensive. Try Kaunakakai's Hotel Molokai, a cluster of A-frame buildings set in a tropical garden. Winter rates start at $159 if you book online.
Refuel A local favorite is the Paddlers Inn in downtown Kaunakakai. Enjoy island specialties like mahi-mahi on a breeze-cooled patio.
Easy Escape From Honolulu (50 miles).

Here's one place where the building industry is in full swing—if you count building sand castles, that is. Professional teachers have specialties ranging from one-on-one instruction to creating huge sculptures for weddings and other special events. Sons of the Beach, which has been around for more than 20 years, charges $25 for private lessons. This barrier island off the southern coast of Texas also attracts kids with rowdier activities in mind—spring breakers. Don't worry, though. Get there before the college crowd, and it's still a sleepy beach town. Among the dive bars are boutiques selling goods like rustic pottery and silver jewelry, much of it from Mexico.
Sleep The Palms Resort is a hipped-up beach motel with an oceanfront café and a heated pool. Off-season rates start at $75 a night.
Refuel The menu at Cap'n Roy's is exactly what you would expect from a pirate-inspired restaurant on a barrier island. Try the famous Camaronitas Diablitos—shrimp wrapped in bacon with cream cheese, jalepeño, and pineapple.
Easy Escape From Brownsville (26 miles), Corpus Christi (179 miles).

Unlike many nearby islands with higher profiles (and higher prices), Tybee Island isn't out to impress anyone. It's more akin to Coney Island than Jekyll Island, and therein lies its nostalgic charm—imagine boardwalks, food vendors, and stalls selling beach-themed kitsch. This is the kind of place where the restaurants have place-mat menus and the lodgings are of the park-at-your-door variety. There's a wooden pier where you can stroll and five miles of sugary beaches fringed by sea oats. The Tybee Island lighthouse was picture-perfect enough to make it onto a postage stamp. On nearby Cockspur Island is Fort Pulaski National Monument, where you'll find a magisterial brick fort used during the Civil War.
Sleep The Ocean Plaza Beach Resort has been thoroughly updated, but it still reminds many people of beach hotels from when they were kids. Even the rates are retro, starting at $69 in low season.
Refuel The Crab Shack is a local institution that's all it's cracked up to be, serving you-shuck-'em steamed oysters. One favorite is the seafood low-country boil, filled with shrimp, sausage, and potatoes.
Easy Escape From Savannah (17 miles), Richmond Hill (34 miles), Charleston (124 miles).