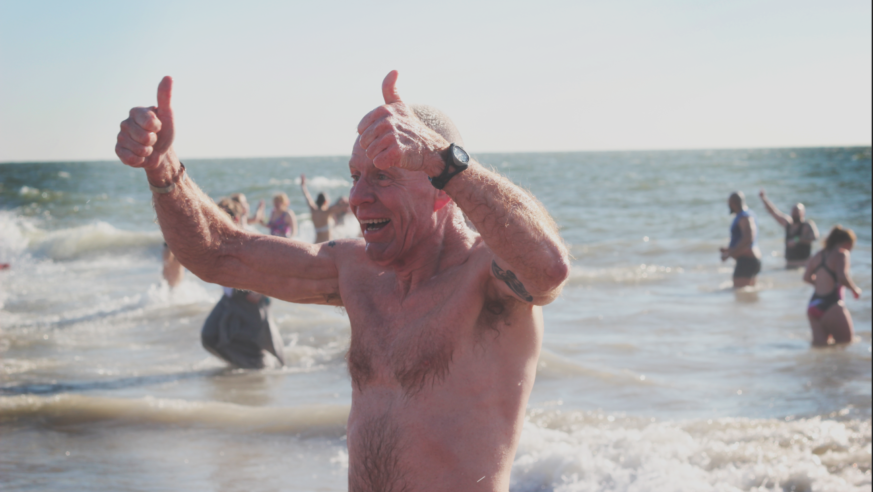 This, friends, is what victory looks like. The 2015 New Year's Day Swim on Coney Island.

On New York City's Coney Island—once home to infamous freak shows—the bizarre tradition of sprinting directly into the icy-cold waters of the Atlantic Ocean, then submerging yourself, baptism-style, goes way back. All the way back, in fact, to 1903, the year that the Coney Island Polar Bear Club was founded by a kooky bodybuilder with more machismo than you'll see on all the episodes of The Sopranos combined. He was convinced a wintery ocean dip could increase stamina, virility, and immunity. (Hey, if a sissy juice cleanse is supposed to do that, who are we to argue with this guy?)

Watching and participating in Coney Island's annual New Year's Day Swim has become so popular that adventurers undeterred by freezing their tuchuses off travel from all over the world to participate. This year's roster included plungers from Australia, Canada, Germany, and England. There's even a beer named after the swim: "The Plunge," dreamed up by the Coney Island Brewing Company (naturally).

Brave Aussie Michele Hayes, 50, a college anatomy and physiology teacher, came all the way from Torquay, Victoria, to do the Coney Island plunge, her first cold-water dip, which was her idea of a tourist activity while visiting her brother in New York. Here's what it feels like:

"When we are all grouped together on the sand, in front of the start ribbon, before they let us go, the feeling was one of solidarity of mad people, we were clapping and laughing so much. We had to be vocal and move, as it was freezing. The wind-chill factor took the temperature lower than what it actually was.

"Once we had the call to 'Go!' it was amazing to run in with everyone. The water felt like it had slapped me, and slapped me hard, but I was so excited I just laughed and laughed and squealed and kept running. The water was choppy, due to the strong winds. One wave came up to my chest that took my breath away. But the exhilaration made me keep running out past the pack, and I saw someone duck-dive beside me. Only one other person was out as far as I was, so I duck-dived a couple of times. I felt free and exuberant and alive. But the warnings and my knowledge of hypothermia made me turn and run back to shore. My brother and niece found me and wrapped me in a towel. I did not feel cold at all, but my skin was red, as if I had been slapped. I changed quickly and congratulated everyone I passed, as it was a shared experience, one that we had been in together."

Wanna try a plunge near you? It's not too late! Here's a list of free charity-driven dips:

Throughout the United States

The Special Olympics hosts cold-water plunges for charity all over the country, from California to Michigan to Virginia. Check out the calendar at specialolympics.org.

Camp Sunshine, the same charity that benefits from Coney Island's swim, offers East Coast dips throughout the winter, including Maine, Rhode Island, and Massachusetts: Pick your plunge at campsunshine.org.

The Annual Barton Springs Polar Bear Splash in Austin, Texas, raises cash for the local Save Our Springs Alliance every January 1.