There are many enticing new travel apps to use while abroad, but beware, you may become afflicted with Bill Shock.

"Bill shock" is the sudden, unexpected increase in your mobile phone bill from one month to the next. If you've experienced it, you're not alone. According to an FCC survey, 30 million people—or one in six—experienced "bill shock" in just two months in 2010.

One of the biggest types of complaints the FCC received last year concerned international roaming charges consumers ran up while abroad without realizing it. We here at Budget Travel can attest to that: One of our editors returned from a trip to Turks & Caicos with a homecoming gift of a $900 phone bill. These bills happen because if you aren't using Wi-Fi to check your email, Internet, or your QR code app, you are therefore using your data roaming, and are charged a pretty penny—or just over a penny to be exact—at $.0195 per kilobyte. So if you're downloading a five megapixel picture from an email, that's about 2 megabytes of data, or an expensive $40. (Here are some handy tips on how to avoid these crazy charges.)

Of course we don't expect these services to be free while abroad, but do they have to be so much? According to the European Union, they don't. The EU has put an end to the "roaming rip-off" by creating blanket standards for all nations within the EU so Europeans who make calls or send texts can "experience the EU's single market without borders." There is a wholesale cap of €1 per megabyte downloaded so as to lesson those pesky data roaming charges, and no roamed call in another EU country can cost more than €0.43 per minute. Automatic alerts are now mandated when a consumer is about to approach the limits of their text, voice, and data plans, and when they are about to incur roaming charges.

Hopefully soon the US will follow suit. The FCC has been investigating phone-billing practices for more than a year now and often mediates between consumers and their carriers, helping the consumer achieve compensation. (You can file your bill shock complaint here.) The FCC acknowledges that alerts when consumers are nearing their text, voice, and data limits could help avoid bill shock, but so far, no strict rules have been passed.

What's the biggest phone bill you've ever been socked with when you returned home?

The 10 Most Travel-Inspiring Films of the Year 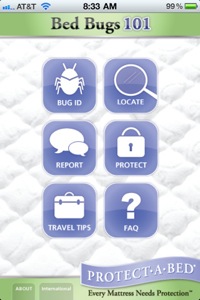 Bed bugs take to the skies

Just when you thought you had put bed bugs out of your mind, they show up again, in the most unlikely of places, most recently having made an appearance on a British Airways flight. As reported in the Daily Mail, British Airways fumigated one of its planes last month after a passenger complained of being badly bitten by bed bugs. The passenger, 28-year-old Zane Selkirk, created a website devoted to her ordeal, ba-bites.com, on which she writes that she had "two horrendous flights" in January and February on British Airways. "During the first, I turned on my light to find bugs crawling on my blanket and a bedbug-blood-spattered shirt. On the return journey, I left my 10-hour flight to find my body covered with 90 bug bites." (Be warned, she posted some pretty graphic photos of her bites!) According to the Daily Mail, BA confirmed that bugs had been found on one of the planes, which had flown from Los Angeles to Heathrow, and fumigated the aircraft before putting it back into service. BA did not confirm an infestation on Selkirk's second flight, from Bangalore to Heathrow. Last fall, the bed bug epidemic in New York spread from popular retail stores to movie theatres. And now with this latest news, it would appear that even our airspace isn't safe. As if reading into our (okay, my) collectively increasing paranoid consciousness, riding the subway the other day, I saw an advertisement for a new iPhone bed bug app&mdash;BedBugs 101, which purports to be a "comprehensive reference guide for locating and identifying bed bugs, loaded with information, images and detailed travel tips." And for those that want to further arm themselves with information and products, Budget Travel asked for reader's tips on the matter (there are some good ones) in a recent post. And in January, Budget Travel's Editor in Chief Nina Willdorf gave advice on packing a bed bug-free suitcase on NBC's the Today Show. More from Budget Travel: They Want to Suck Your Blood Should taxpayers fund the war against bedbugs? A Neat Freak's Guide to a Clean Suitcase

How to make a first-class sandwich for a flight

There is no such thing as a free lunch. Pretty soon, there will be no such thing as free pretzels on a flight, either. On March 1, Continental stopped giving free snacks to coach-class passengers on its domestic flights. Continental is copying the no-snacks policy of its merger partner, United. [This move was first reported by Cleveland's The Plain Dealer.] Delta, Southwest, and Frontier are among the last holdouts in offering snacks. So&hellip;what to eat? For flights of two hours or less, pack nuts. Walnuts and almonds are some of the high-protein, low-calorie options. For longer flights, try crackers and cheese sticks, or fruit and granola bars. What about making a sandwich? In 2007, Budget Travel checked in with the executive chef of New York City's popular sandwich chain 'Wichcraft for advice. Follow these tricks, and your sandwich will stay appetizing for hours. MAKE A FIRST-CLASS SANDWICH &bull; Go for thick bread. Bagels, baguettes, and ciabattas&mdash;soak up flavors without getting soggy. (If you're conscious of carbohydrates, use a whole wheat tortilla instead&mdash;but toast it first by holding it over your stovetop's flame until lightly brown.) &bull; Mustard travels well. It packs a lot of flavor, and it doesn't spoil. At your airport food court, grab a single-serve package for your flight. (Hate mustard? Try a dab of olive oil or pesto, instead, because either one will stay fresher longer than mayonnaise.) &bull; Skip the meat. It won't stay well. &bull; Go for romaine lettuce. It retains its crispness for hours on end. &bull; Use cheese. (Assuming you're not lactose intolerant, of course). Cheese&mdash;especially hard, aged cheese&mdash;can stay at room temperature for many hours. &bull; Wrap your sandwich in wax paper. Then cut it in half before you hit the road. &bull; Fruit can cleanse your palate. Pack sliced fruit, like watermelon, in a plastic food container. So, what are your tips for packing snacks and sandwiches for a flight? Please share 'em, by posting a comment below. MORE FROM BUDGET TRAVEL How to Make a First-Class Sandwich 6 Places Germs Breed in a Plane How to Take Better Food Photos

An 8.9 magnitude earthquake off the northeast coast of Japan on Friday triggered a massive tsunami, which was threatening to hit Hawaii and numerous regions around the Pacific Ocean, including the west coast of the U.S. The hardest hit by far has been Japan, where hundreds died in the aftermath of the devastating quake, according to news reports, as water surged across northeastern Japan. Other regions and countries along the Pacific Ocean, from Australia to Russia and Alaska to Chile, waited to assess the possible threat, but it appeared by Friday afternoon that the impact of the tsunami beyond Japan was relatively minor. Those who are in Japan or planning to travel there soon, the U.S. State Department cautions, should be aware that strong aftershocks are likely for weeks following a quake as large as this one. The State Department has issued a travel alert for Japan, advising American citizens to avoid tourism and nonessential travel there for the time being. Tokyo airports are currently closed, and other airports across the country might shut down or limit access to flights, the State Department reported. Several airlines have posted notices about canceled or changed flights into and out of Japan; travelers should check with their airline for flight details. American Airlines stated on its website that due to the earthquake, the airline will waive a one-time change fee for flights into and out of Tokyo for the next week. Delta Air Lines also advised customers that the cancellation or significant delay of any flight entitles them to a refund, or affected customers can make a one-time change to their ticket without a fee. American citizens in Japan or elsewhere who need information or assistance regarding the earthquake and tsunami can contact the State Department at JapanEmergencyUSC@state.gov, or at 888/407-4747 from within the U.S. and Canada, or at 202/501-4444 from outside the country. Google has launched a Person Finder tool to help people who are looking for someone or who have information about someone possibly affected by the quake. Travel insurance provider Access America advises travelers who sustain an injury on their journey to call their provider’s assistance department immediately to learn about their emergency medical coverage and to obtain a referral to a local doctor or hospital, as well as to find out about medical air-evacuation options. In the aftermath of the political uprising in Egypt, insurance providers advised that travelers with "cancel anytime" coverage had the best options for assistance. And just last month, travelers faced with the 6.3 magnitude earthquake in New Zealand were also left scrambling to figure out whether to continue with their trip. More from Budget Travel: Is Egypt ready for tourists? Rebuilding Sri Lanka one house at a time Australia goes on sale, Oprah tries to help 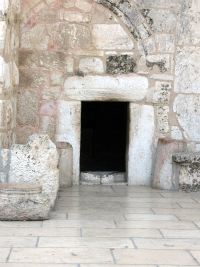 Israel: "Walk in the footsteps of the Virgin Mary"

Tourism officials in Israel now offer a free, do-it-yourself guide to walking in the footsteps of Jesus's mother, says the Associated Press. The booklet, which includes information on the historical sites, their operating hours, and accessibility issues for the physically impaired, is being distributed to tourism wholesalers and tour operators. To get the booklet, go to the tourism ministry's special Catholic site: holyland-pilgrimage.org. Download the 59-page PDF by clicking here. (Some web browsers may require you to download free Adobe Acrobat software to be able to read this free document.) Each month, Israel tourism sends out an e-mail newsletter with updated travel news relevant to Christian pilgrims. Sign up by clicking here. Last year, 3.45 million tourists visited Israel. More than two-thirds were Christian, with more than half Catholic. One of the most popular sites is Bethlehem's The Basilica of the Nativity. The church protects the cave that's said to be the where Jesus was born. Many of the sites of historical significance are part of territory controlled by the Palestinian Authority. American visitors can pass to all of these sites using their visa to enter Israel. MORE FROM BUDGET TRAVEL Israel: Trips That Can Change Your Life Excavation Vacations in Israel and Beyond Real Deal: Jordan, 8 Nights, From $1,175