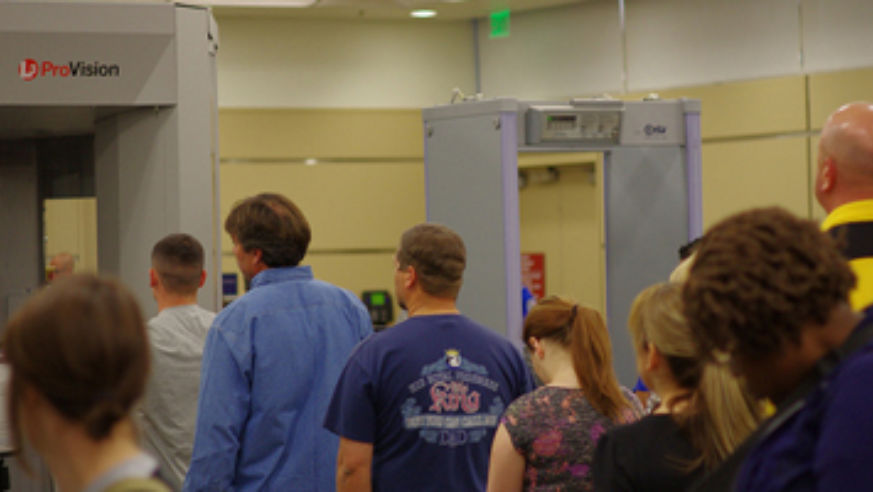 Courtesy niiicedave/Flickr
Would you rank the TSA experience as more irritating than another passenger wearing flip flops?

In a recent poll by Skyscanner, a travel website based in the U.K., more than 2,700 flyers ranked their biggest, most irritating air travel pet peeves. Turns out the Brits care more about what other passengers are wearing than anything else.

Coming in tenth was flip flops (isn't it okay to be casual while you're on vacation?), followed by team shirts and noisy jewelry. Men who show off their hairy chests came in close behind (maybe too casual is not okay after all.) Next, in a step towards gender equality, was women whose tops are a bit too low cut. The awkward combination of socks and sandals takes the next slot, with offensive t–shirts, short shirts that reveal too much belly, and sweat spots on clothes. Which brings us to the number one pet peeve for flyers in the U.K.—men with low pants who wind up rocking the "plumber" style.

Sure, those things might be mildly annoying while you're trapped on an airplane, but let's face it, if this poll were taken by American flyers, you'd be reading a list based on TSA security screenings, screaming babies, oblivious parents, children who are convinced the back of your seat is a soccer ball—after a three hour flight from Rome to Dublin, I'd have to rank this number one—and probably a lack of proper in–flight meals or entertainment. Maybe some things like rude t–shirts would make the list, but I have a feeling we have different ideas of what drives us crazy in the air.

What do you think? What is your biggest air travel pet peeve? Sound off below!

Would You Decline an Upgrade to Be Closer to a Travel Companion?