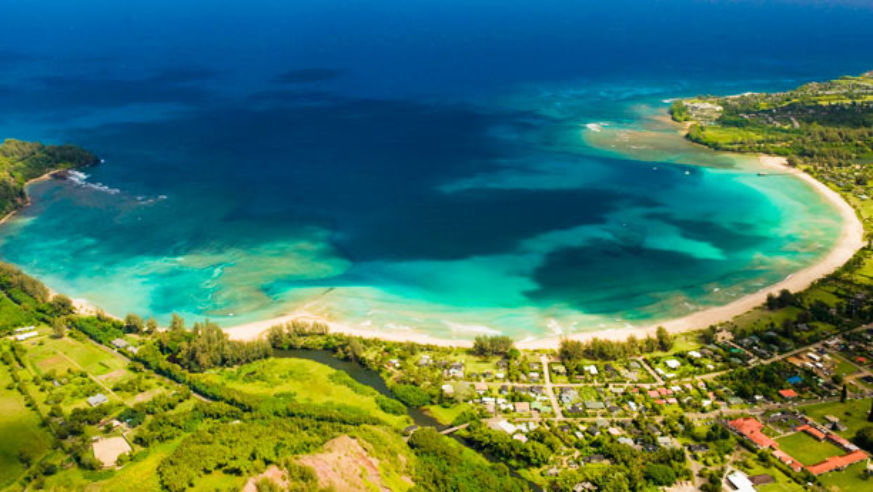 Here's a snapshot of defining experiences on the Big Island, Maui, Kauai, and Oahu: majestic landscapes, traditional dances and dishes, and beaches for every water sport. Get a sense of which ones fit your travel style and your budget.

DRIVE OR HIKE TO NATURAL WONDERS
Shaped over the course of several hundred thousand years by five volcanoes, the Big Island is the youngest and largest in the Hawaiian archipelago—and still growing, thanks to Kilauea, which has been erupting nearly continuously since 1983. Its breathtaking, three-mile long caldera is part of Hawaii Volcanoes National Park, where lush rain forest alternates with stark lava fields and active steam vents. Located 30 miles from Hilo and 95 miles from Kailua-Kona—the Big Island's main resort areas—the park makes an easy day trip ($10 per vehicle).

On Maui, the otherworldly landscape of 10,023-foot-tall Haleakala rivals the Big Island's volcanoes for showstopping views. Courageous visitors willing to make the winding, predawn drive to the summit are rewarded with an epic sunrise ($10 per vehicle). The road to the summit has the added draw of passing through the up-country paniolo (cowboy) town of Makawao, where you can break for award-winning Hawaiian regional dishes at Hali'imaile General Store. Drivers with a taste for sea cliffs and waterfalls should tackle Maui's 52-mile-long Hana Highway, an all-day affair involving 56 one-lane bridges and more than 600 curves.

Kauai's Route 550 crosses a succession of lush valleys that drop 3,000 feet and more to sea level as the road twists its way through Waimea Canyon State Park and Kokee State Park. About halfway through the hike along Kokee's 1.8-mile (one-way) Canyon Trail, you'll reach Waipoo Falls, a waterfall that cascades some 800 feet. The 80-foot-tall Wailua Falls, on the other side of the island, feeds Wailua River State Park, site of the remains of an ancient heiau (place of worship), a fern grotto, and the only navigable river in Hawaii. Smith's Kauai leads riverboat tours ($9–$20).

IMMERSE YOURSELF IN HAWAIIAN CULTURE
The hula, Hawaii's indigenous dance, takes center stage each spring at the Merrie Monarch Festival in Hilo (April 4–10, 2010; $5–$30). Men and women compete separately in the hulakahiko (ancient) and hula 'auana (modern) categories. Tickets are notoriously hard to come by, but it's easy to catch free hula shows any time of year. The Volcano Art Center's Hula Kahiko Series on the Big Island showcases the kahiko version, performed on a stone platform near Kilauea caldera. The Kuhio Beach Hula Show has a different backdrop: it's staged near the statue of Duke Kahanamoku, the father of modern surfing, in Waikiki.

A luau combines traditional Hawaiian dance and food. Maui's Old Lahaina Luau serves everything from kalua pork roasted in an underground oven to guava-glazed chicken ($92 adults, $62 children 12 and under). Lahaina also has more art galleries per capita than any other U.S. town, and they stay open until 10 p.m. on Fridays.

Hawaii's Plantation Village, a 20-minute drive from Waikiki, uses original and replica buildings to recreate immigrant life in the sugar plantation camps circa 1900 ($5–$13). Sugar's heyday has passed, but pineapples continue to be a cash crop. Dole Plantation, a working pineapple plantation in central Oahu, has the world's largest walking maze and a two-mile, narrated Pineapple Express train tour (admission free, activities from $3.50). Maui's Kapalua Resort hosts a tour that includes pineapple fields, a tasting, and the picking of a fresh pineapple to take home ($40–$45).

Two historic residences in Honolulu reveal how the upper crust once lived. Crown jewels, feathered cloaks, and royal china within Iolani Palace—the only palace in the U.S.—reflect the tastes of the late 19th-century Hawaiian monarchy. The Royal Hawaiian Band plays a concert on the grounds at noon most Fridays. Shangri La, a magnificent estate built in the 1930s, was the pet project of tobacco heiress Doris Duke. She fell in love with Hawaii on her honeymoon, which also took her through the Islamic world, inspiring her to decorate the home with rare Islamic art.

GO BEACH-HOPPING
Hapuna, a half-mile-long white-sand beach surrounded by lava fields on the Big Island, can handle snorkeling, swimming, sunbathing, body surfing, and boogie boarding. For near-shore scuba diving, head to Kealakekua Bay and pick up your gear from Snorkel Bob's (gear rental $9–$44 per week). The Big Island's best-known surfing spots—Lymans and Banyans—are next to each other, just south of Kailua town on Alii Drive, but the surf breaks on sharp lava reefs and crowds can be intense. It's not for novices.

Snorkelers on Maui favor the western shore from Kaanapali to Kapalua. Black Rock, sheltered on Kaanapali Beach near the Sheraton Maui Resort & Spa, offers easy access to boat tours, fishing, and kayaking. Goofy Foot Surf School runs two-hour lessons for $65. Hookipa, on the island's north shore near Paia town, is a world-class windsurfing venue where you can see the pros in action.

Waikiki draws tourist crowds, but it's still great for hee nalu (wave-sliding): surfing, stand-up paddle boarding, canoe surfing. Catamaran sailing tours leave right off the beach (Waikiki Beach Services, surf lessons $40–$75; canoe rides $10–$15). On Oahu's North Shore, surfers clog the roads to reach the roughly eight-mile string of beaches whose wintertime waves swell to upward of 30 feet in height. In summer, the ocean appears as calm as a lake, and Shark's Cove, in front of the Sunset Beach Fire Station in Pupukea, fills with snorkelers and scuba divers. A reef quickly drops away to depths of 30 feet or more and supports abundant sea life, including the occasional turtle (but no sharks, despite the cove's name).

Hanalei Bay, on Kauai's north shore, has a spectacular beach bordered by the Waipa and Hanalei rivers with access to virtually every ocean activity, from surfing and windsurfing to snorkeling, boating, and kayaking up the Hanalei River. There is even a pier for fishing. One note of caution: Like all north-facing beaches in the islands, Hanalei sees very large waves in the winter. At Poipu Beach, on the south shore, a small breakwater creates an ideal pool for youngsters.

7 INSIDER TIPS
1. Oahu's public bus system—simply known as TheBus—covers every inch of the island for $2.25 per trip (with one free transfer). If you have a day to spare, try the circle island route as a tour. There is also a $25, four-day unlimited-trip pass for visitors. On other islands, public transportation ranges from limited to nonexistent.

2. All major rental-car agencies operate in the islands. Car shortages can occur during peak seasons (June–August and December–April). Gas prices are among the highest in the U.S.—as much as $1 per gallon more than on the mainland. In general, gas also costs a few cents more per gallon near resort areas and airports.

4. Hip clubs cluster on and around Hotel Street in Honolulu's Chinatown, among them, thirtyninehotel, Loft Gallery and Lounge, SoHo Mixed Media Bar, and The Dragon Upstairs. Cover charges range from free to $20. Friday nights tend to be crowded as downtown workers party before heading home for the weekend. On the first Friday of each month, Chinatown's galleries are open late.

5. Molokai's sea cliffs hem in a beautiful peninsula with a troubled past: From 1866 to 1969, Kalaupapa National Historical Park was the site of forced quarantine for people suffering from Hansen's disease, then known as leprosy. The 1.5-hour mule ride down a vertiginous cliff trail is now a right of passage for intrepid travelers ($175).

6. The demise of Hawaii's main interisland ferry service has made flying the only viable option. There are several daily flights to each island, with in-air time typically less than 45 minutes. Go! and the posher Hawaiian Airlines offer jet service; they're locked in an ongoing fare war, with one-way tickets from $49. Island Air and Mokulele Airlines operate select, slightly cheaper flights on smaller, prop-driven planes. Online booking sites include all these airlines, but you'll generally find better fares through the airline websites.

7. Admission to the USS Arizona Memorial at Pearl Harbor is free, via a first-come, first-served ticket system. The wait can be as long as two hours during peak periods, so it's best to arrive as close as possible to the memorial's 7:45 a.m. opening. From Waikiki, the #20 and #42 buses stop directly at the Memorial Visitor Center. Plan on at least an hour and a half one way by bus or 45 minutes by car.

TIMING
There are two noticeable seasons in Hawaii: the drier months (May to September) and the wetter months (October to April). Seaside variations between the two average about 9 degrees Fahrenheit. The winter surf season runs from October through February on north- and west-facing beaches; the summer months bring good surf to the south-facing beaches. Whale-watching season begins in November and tapers off by May. September through early October can be uncomfortable, as prevailing tradewinds die off and give way to Kona weather—low wind and high humidity—that occasionally blankets the islands in vog, the volcanic haze from Kilauea's eruptions.

• Combination plate at Ono Hawaiian Foods, a local institution on the outskirts of Waikiki: $15.50.