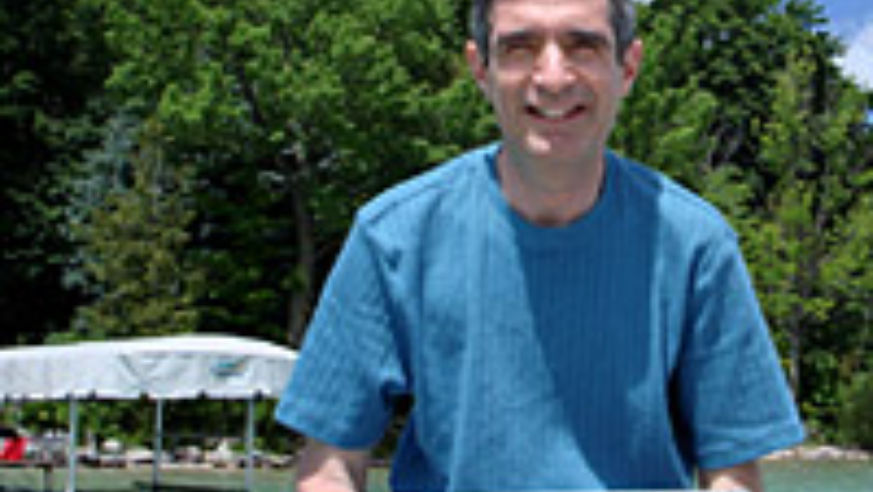 This summer an eye-popping statistic was reported by several reporters and bloggers, including ones at the Associated Press, CNN.com, and WSJ.com. Here's the Chicago Tribune's version:

More than 12,000 laptops are lost each week at U.S. airports, according to a study conducted for Dell by the Ponemon Institute, a research think tank. Only one-third of laptops lost and found in airports are reclaimed, the study said.

Hmm…12,000 laptops a week is an enormous number of laptops.

Skeptical, I called the man who put together the study: Larry Ponemon, founder of the Ponemon Institute.

I learned that Larry has a different definition for the word "lost" than the one in the dictionary.

[Update: Sept. 16: A WSJ.com review by Carl Bialik and a follow-up study find that far fewer laptops are lost than the press release said. Vindication!]

When Larry uses the word "lost," he mainly means what happened to his laptop ten months ago.

Larry was passing through a security checkpoint at Chicago's O'Hare airport, juggling a large garment bag, another bag, and his laptop. After screening, he picked up his belongings in a typical rush. He walked about 30 feet from the checkpoint when someone shouted, "Hey Mister, you stole my computer!"

It turns out that Larry had picked up the wrong laptop. The two men swapped machines and parted grumpily.

By Larry's reckoning, two laptops were lost. He says a laptop is lost if it is "at least temporarily and knowingly out of my possession."

I disagree. I think he and the other guy each misplaced, or accidentally swapped, their laptops. The laptops hadn't disappeared long enough to be "lost."

Larry politely insists that if a laptop is out of your control, even momentariliy, then the data inside has been left defenseless.

Okay. Some laptops are temporarily lost and some are permanently lost. Fine. There's still a major problem: The press release outright misled reporters when it said that most laptops are never reclaimed. Here's the damning quote:

"A new study conducted by the Ponemon Institute has found that more than 10,000 laptops are lost in the 36 largest US airports each week, and nearly 70 percent of those laptops are never reclaimed."

But that's not what the study said!

Confused? I don't blame you. Travel reporters and bloggers were confused, too. Many mistakenly reported that most of the laptops lost at airports are permanently lost.

Curious how the Institute came up with its 12,000-laptops-a-week figure? I hope so. It's an amusing little story.

Larry's team decided not to ask for official statistics from Lost & Found offices or from any spokespeople at any airport, airline, or government agency. Larry says his team "did try to go through official channels, but that seemed to stall the project."

Larry's team instead interviewed janitors, baggage handlers, and TSA screeners over many months at large and small airports. His team didn't care about the "authority" of the people being interviewed. The opinion of, say, a part-time janitor who had only been working at an airport for a week was as valued as the opinion of, say, a security officer working at the airport for five years.

Larry says there is a strong precedent for conducting a study in the manner he chose. His type of "benchmark study" is commonly done when sociologists "don't know the size and make-up of a population and doubt that their survey samples are representative of the larger pool." Larry is a former partner of PricewaterhouseCoopers and a respected researcher, so I'll defer to him on those points.

But I ask you: Is it believable that 12,000 laptops are permanently lost at airports every week? When the statistic appeared on the news site Digg.com, several readers questioned the claim.

For example, one reader said:

A different reader on Diggdefended the statistic by doing a back-of-the-envelope calculation with government statistics:

55.5 million people flew in the month February of 2008 (Feb is usually the slowest month, by the way), that's 13.875 million per week. Assume 20 percent of them had laptops, that roughly 2.8 million laptops per week going through the airport, and if 10,000 are lost, that's only 0.36%, or roughly 1 in 278 lose their laptop. You think that's so wildly out of line (remember I picked the slowest month the airlines have)?

Is this reader right in believing that 12,000 laptops are stolen at airports every week? Well, some other people also agree. For instance, a spokesman for the Airports Council International North America, who was interviewed by AviationWeek.com, said that roughly 3.5 million business travelers fly each week. "Only less than one half of one percent...would have to lose their laptops to reach the 12,000 a week number," he says.

Imagine what these examples mean in real life. Think about the last time you were at a large airport. Every hour, there were a few hundred people passing through each section of the airport that you visited. How often have you ever seen a laptop lying unattended in one of those sections? If you follow the logic of these examples, you should see at least one laptop piling up every hour or so on average at every major gathering place at an airport.

Did journalists and bloggers question the statistic? The Atlanta Journal-Constitution was the only print newspaper I found whose reporter (namely, Mike Maciag) called officials at a couple airports to ask their opinions. Maciag interviewed Orzy Theus, public information manager for Atlanta's main airport, who said, "I think the credibility of the methodology is really questionable."

My favorite parts of his article are when it contrasts official data with the Ponemon Institute's data.

At Ronald Reagan Washington National Airport, 276 laptops were turned into the airport's lost and found last year, 269 of which were returned, according to the Washington Airports Authority.

The Ponemon Institute study says, in contrast, that 450 laptops are lost at Reagan National airport every week. Most of those 450 were not reclaimed, if one believes the press release (which one shouldn't).

That's quite a difference! Only 276 laptops lost and nearly all of them reclaimed in one year, versus about 23,400 lost—and a majority of them not reclaimed—in one year.

Atlanta and Detroit airport spokespeople also reported very low numbers of lost laptops. (Larry would likely interrupt at this point to say that such official statistics probably fail to count the many times that laptops are lost, stolen, or misplaced at airports without being reported by travelers.)

Props to Patrick Thibodeau of ComputerWorld, who called experts to put the study in context, and to the folks at an AviationWeek.com, who tried to spell out the details of the study and who posted a link to the full report.

Disappointingly, a couple of the most visited travel blogs didn't put the statistic in context or express any skepticism. Gadling reprinted it and so did USA Today's Today in the Sky blog. (On the other hand, Jaunted, Gridskipper, and Christopher Elliott ignored the statistic entirely, which was probably the right approach.) One non-journalist travel blogger, Mark Peacock at BoardingArea.com, said he was skeptical about the study. Victor Godinez of the Dallas Morning News also expressed doubts in a blog post.

I appreciate the coverage in Sean's blog, especially the excellent photo of me on my boat at Torch Lake. A good friend and mentor told me a long time ago that you have to have a "thick skin" to do controversial research. Here are just a few points that need to be made about Sean's interpretation of our research.

Sean's blog piece diminishes the risk associated with lost laptops that are ultimately recovered. His article suggests that we have blown out of proportion the risk associated with a temporarily missing laptop. The fact is it only takes seconds to extract sensitive or confidential information from a computer that leaves the owner’s custody. This is why our study's numbers include laptops that are recovered. This is also why major news media found our study's results compelling enough to print.

We stand behind our research methods. Since airports do not have statistics that track lost or stolen laptops, we surveyed airport employees who are in the front lines of this issue. We believe that these employees are an excellent source for understanding the prevalence of travelers who leave their laptops behind or report their laptops missing.

Our study is successful because it has raised awareness among travelers in the United States and abroad. Clearly the airport environment is conducive to security risks because people are traveling with portable computers that contain sensitive or confidential information. Think about it! What other public facility exists where so much data is in one place at one time?

Sean's article is entertaining. However, as a research institute that studies privacy and data protection, we believe the issue of lost or missing laptops to be a serious risk to companies and to the people whose information is on those computers. In other words, this is no laughing matter.