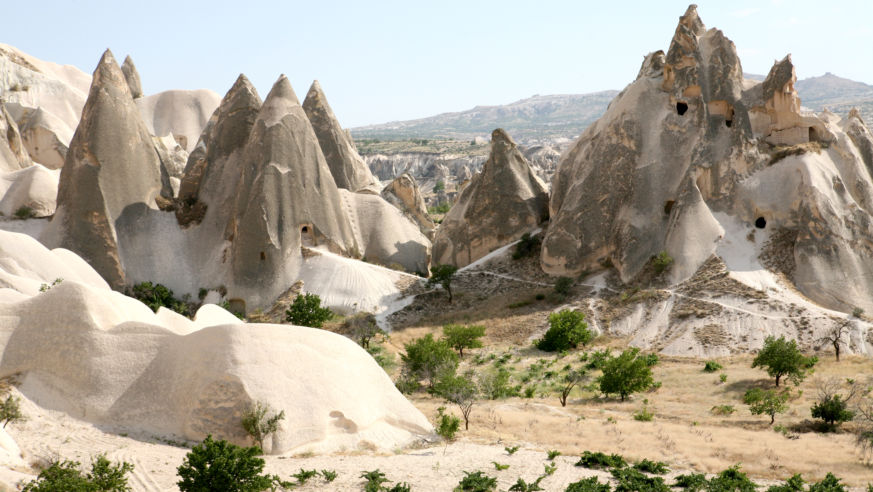 The unique jagged mountains of Cappadocia, Turkey, are just one of the extraordinary stops on our tour of "Wild Europe!"

There's more to Europe than winding city streets, vibrant cafés, and beautiful museums! The continent abounds with rugged mountains, pristine lakes, and secluded beaches to gallop—including some of the world's premiere parks and wildlife habitats.

Ready to take a walk on the wild side? Keep reading to discover six of Europe's most unforgettable natural wonders—and how you can experience them on a budget.

On Europe's edge, as far west in Ireland as you can travel, Connemara is a weathered, mythical and wild region, where travelers can immerse themselves in nature and Irish culture, history, and traditions.

Rent a car for your own Irish road trip. Start in colorful, bustling Galway City, then drive west along the north shore of Galway Bay. Road signs in Gaelic, one-pub towns, and Blue Flag beaches are just some of the signals that you've hit Ireland's wild west. Explore the impressive and winding Sky Road, which you can drive or cycle for quintessentially Irish vistas of offshore islands and the Twelve Bens mountains. Stretch your legs in Connemara National Park, where hiking a few of the steeper trails of the Twelve Bens will earn you bragging rights and unfettered views of scenic mountain expanses and distant islands. Next, make a stop at legendary Kylemore Abbey, located northeast of Clifden on a private lake. Meander through the Victorian gardens before feasting on scones, made with the Benedictine nuns' special recipe, and hot tea. For a special treat, time your visit to coincide with a choral performance in the abbey's church.

Clifden, about an hour's drive from Galway City, offers a variety of homey B&B's and guesthouses. Check out the family-friendly Clifden Station House, located right in town. Walking paths are situated right outside delightful Dolphin Beach House on the Lower Sky Road.

Nature to the extreme in the "Land of Fire and Ice."

Just south of the Arctic Circle in the North Atlantic, Iceland captivates travelers with intense adventure opportunities along striking black sand beaches and vibrant green moss-covered lava fields. You can snowmobile on glaciers, saddle up for a wild horse drive with local farmers, or hike alongside sputtering geysers.

Head into Iceland's Southern Highlands to hike the popular Laugavegur trail, where hot springs, black arctic deserts, towering glaciers, and red-and-yellow-colored mountains reward the intrepid traveler. Sign up for a guided tour or go it alone on this 34-mile route that connects two nature reserves, Landmannalaugar and Thorsmork (Icelandic: órsmörk). During the summer season, buses depart daily from Reykjavik to the trailhead. The Laugavegur trail normally takes three to five days, but the difficulty of this trail depends on the weather, which can range from T-shirt temps to whiteouts—in summer. Feeling even more adventurous? Hike past Thorsmork to the small village of Skógar to view one of Iceland's mightiest waterfalls. Another alternative that I love is to saddle up and travel the way Icelanders have for centuries on the small but strong Icelandic horse. Whatever you choose, pack your bathing suit, because settling into a warm geothermal pool at the end of the day is a must here in the far north.

Campsites with access to toilets and showers, and basic mountain huts with toilets, kitchens, and sometimes showers are located in intervals along Laugavegur trail. Travelers should book huts well in advance and pack a sleeping bag and their own food for the journey. At the Volcano Huts in the Thorsmork Nature Reserve, there is a restaurant and bar.

Located at the tail end of Europe along Southern Spain's coast, Doñana National Park is one of Europe's best-known conservation areas. In a special spot where the Guadalquivir River delta meets the sea, this UNESCO Biosphere Reserve welcomes a limited number of travelers to enjoy a European safari complete with beaches, pine forests, flamingos, and the endangered Iberian lynx.

Once a favorite hunting reserve of Spanish kings, Doñana National Park is one of Europe's largest parks, encompassing beaches, marshland, lagoons, pine forests, and massive sand dunes. A haven for wildlife, the park is on an important migratory route for birds traveling from Africa to Europe. From the principal visitor center at El Acebuche, close to Matalascañas, travelers may easily hike along several boardwalks through the wetlands to observe flamingo, red-crested pochard, azure-winged magpie, or the glorious hoopoe. More in-depth guided tours via 4WD vehicles depart from the El Acebuche visitors center and take travelers through a variety of ecosystems, including one of the last undeveloped bastions of beach in southern Spain and through an area of dunes so large you may feel like you're lost in the desert. In marshes, scrubland, grassland, and pine forests, keep a lookout for wild boar, fallow deer, and the rare Retuerta horse. While much of the park is restricted to guided tours in order to protect the fragile environment, travelers may also trek along footpaths at the visitor center at La Rocina and also at El Palacio del Acebrón. Housed in an old palace, this visitors center showcases special exhibits on the park's history and natural environment.

The nearby resort area of Matalascanas has a variety of accommodations. Funky El Rocío's Hotel Toruño is a must-pick for flamingo and heron watchers. Be careful if you're attempting to book in late May or early June, as prices soar and rooms are scarce during the popular Romería del Rocío, an annual pilgrimage.

Where romance, castles, and whiskey combine for a surprisingly family-friendly escape.

If your vision of "Wild Europe" involves romance, head to Scotland's Highlands, where endless heather-covered moors undulate under misty skies and men and women with thick brogues share a laugh between drams of whiskey.

Explore the southern edge of Cairngorms National Park, Britain's largest national park, using Blair Castle as your jumping-off point. The traditional seat of the Dukes of Atholl, this classic, stark white castle set amid the lush green rolling hills has hosted a variety of important guests throughout history, including Mary, Queen of Scots and Queen Victoria. Tour this 13th-century castle, which boasts the last remaining private army in Europe. Next, enjoy the outdoors as the Scots do through country sports. Saunter along rugged tracks on sturdy Highland ponies or fish for salmon or wild brown trout along a peaceful Scottish hill loch or rushing river. Modern adventurers may also choose to travel by mountain bike or Land Rover. Just down the road, Scotland's smallest traditional distillery, Edradour, beckons adult guests for a tour and tasting to soothe muscles and warm up after a day outdoors.

Stay on the estate and historic grounds and choose from a variety of family- and group-friendly accommodations, including Woodland or Highland Lodges, with impressive views of the surrounding hills. Close to the castle in the small village of Blair Atholl, the Atholl Arms Hotel offers wallet-friendly rates in a charming B&B setting.

Set off by yourself to hike one of the many trails through Cappadocia's valleys or take a guided tour by foot, bus, or horseback. The trails run from village to village past vineyards and apricot groves along the old Silk Road, with many villages carved out of the area's volcanic rock centuries ago. Keep a lookout for rock-carved churches and the entrances to centuries-old underground cities where early Christians sought refuge from aggressors. Step inside to cool off and get stunned by well-preserved, ornate Byzantine frescoes. For a special treat, take a hot air balloon ride to enjoy Cappadocia's surreal landscapes at dawn.

Stretching across Central and Eastern Europe, the Carpathian Mountains encompass some of the wildest terrain in Europe, with dense forests, picturesque castles, alpine meadows, cavernous gorges, curious rock formations, and traditional Romanian villages. This part of Europe is truly for those with a keen sense of adventure and love of history.

Take a hike! In Piatra Craiului National Park, that is, home to a variety of caves, gorges and the longest and tallest limestone ridge in Romania. Keep a lookout for brown bears, wolves, and lynxes. Stop in unique villages, where the locals hold fast to a traditional way of life. Visit imposing Bran Castle, also known as "Dracula's Castle" after Bram Stoker's famous (fictional) vampire, and take in the legends surrounding this centuries-old fortress. Continue your hike in the Bucegi Mountains, where shepherds make Branza de Burduf cheese, which gets its distinctive taste from aging in fir tree bark.

Budget-friendly pensions, campsites, and chalets are located throughout Piatra Caaiului National Park, including in the villages of Pestera and Magura. Pensiunea Pepino in Magura, in a beautiful location complete with its own private garden, serves up delicious, home-cooked Romanian cuisine right inside the park.