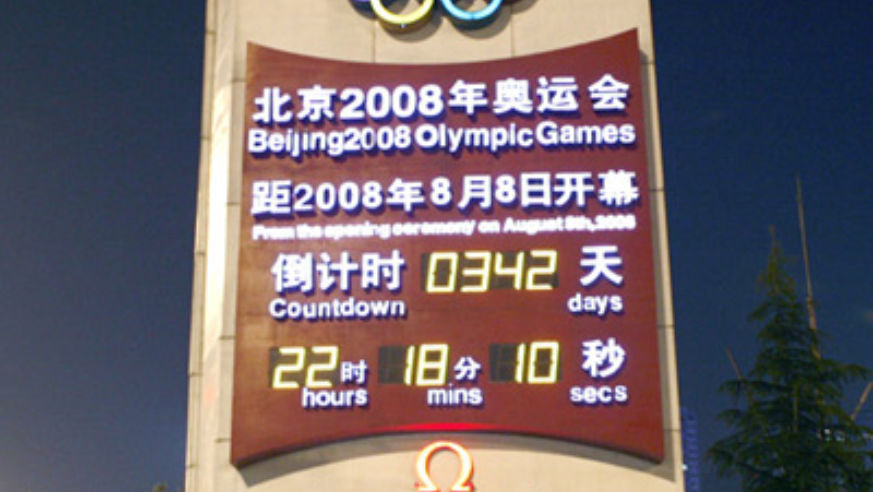 Tony Law
A neon timer alongside the Northeastern Third Ring Road counts down to the Olympic kickoff date of August 8, 2008

A series of setbacks this year have reduced China's chances for winning a gold medal in tourism.

For starters, there's been ethnic unrest in Tibet and the massive devastation caused by widespread flooding and Sichuan's earthquake.

China is now struggling to host a successful Olympics Games—plus attract tourists for the rest of year. As the Wall Street Journal puts it, "Many Chinese travel companies say they are reeling from cancellations and delays by foreign tourists backing away because of security and visa concerns."

For the first five months of 2008, tourism in Beijing and Shanghai has been down 15 to 20 percent. Although most Beijing hotels are booked solid for the games themselves (which begin on August 8), many hotels are half-empty at the moment—the theory is that lots of tourists stayed away, assuming that rates would be exorbitant even long in advance of the Games. Of course, oil-induced inflation has also played its part in tamping down tourism.

But if Beijing is in your own future, whether in a "got my tickets for the Opening Ceremony" way or just in a "hope to get there sometime" way, check out John Powers' introduction to the city in the Boston Globe. To visualize the place, he says, "think a supersized Houston with noodles, with a summer climate to match."

Also worth reading is the Financial Times' coverage of Beijing's ancient Qianmen district, which has undergone so much tearing down and clearing that some critics say it's now nothing more than a "theme-park pastiche of the past." The redevelopment, by the way, won't be completely finished in time for the Olympics.