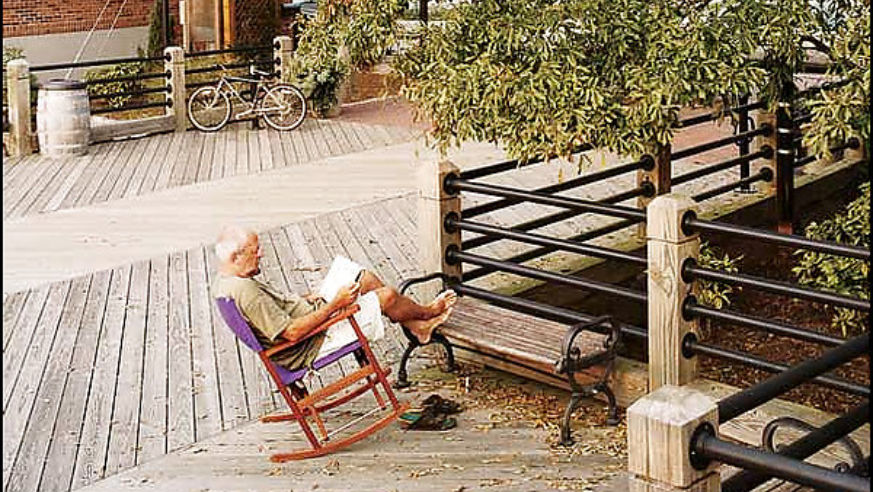 The Riverwalk on the Cape Fear

The welcoming Southern vibe and old port atmosphere remain, even after Hollywood came to town

Despite the grits and sweet-potato fries on the menu and a name that sounds like Bo and Luke Duke would fit in nicely, the Dixie Grill is not your typical Southern diner.

Dalí-esque paintings of fish decorate the lime-green walls, and above the grill is a mural of a sunny-side-up egg screaming as it's about to get eaten. Local musicians sometimes play out back, where a small bar serves microbrews and $2.50 bottles of Pabst Blue Ribbon. The staff is a young, tan bunch who could work as extras on a hip teen drama. And considering that One Tree Hill and Dawson's Creek were filmed in town, along with dozens of movies, they may very well have done so.

Founded in 1739, Wilmington remained North Carolina's largest city through the early 1900s. The action clusters where it always has, the east bank of the Cape Fear River, 29 miles upstream from the Atlantic. The red-brick streets were largely paved over with asphalt years ago, but there are a few holdouts, including a handsome, if faded, section of Dock Street near the river.

Wil-mington's 230-block historic district includes ramshackle factories converted into restaurants, pubs, galleries, and shops, in addition to Victorian homes so postcard-quaint that the owners must be tempted to run them as B&Bs. (Two home owners who did just that with particular success operate Camellia Cottage and Blue Heaven, which both have big porches and are located five minutes by foot from the river.) With a slew of artists and musicians calling the place home, a state university down the road, and fantastic beaches that are 20 minutes farther, Wilmington simultaneously appeals to hipsters, beach bums, and fans of traditional Southern gentility. But thus far tourists pay more attention to the two port towns it's often compared to--Savannah and Charleston--so Wilmington remains relatively quiet by comparison.

Visitors naturally gravitate to the boardwalk lining the Cape Fear. Known as the Riverwalk, it's ideal for strolling at dawn and dusk (and oppressively hot midday in the summer). A $3 ferry does a quick cruise-by tour of town before dropping you off at the Battleship North Carolina, across the river. Head belowdecks on the World War II ship to check out the old bakery, chapel, and sleeping quarters, and placards with soldiers' personal recollections (like the private who complained about how often "wallpaper paste"--rehydrated potato--appeared on the menu). On spring Friday evenings, classic movies are shown under the stars and next to the fighter planes and huge guns that once launched artillery up to 20 miles away.

Back on Wilmington's shore, grab an umbrella table at The Pilot House, built in the 1870s and dragged to the riverfront a century later for a new life as a restaurant. The prices that come with a river view are worth it, especially considering the elegant setting (impeccably dressed waitstaff, tables with fresh flowers) and regional favorites (pork loin sandwiches, fried green tomatoes, tons of seafood).

Guided ghost walks, trolley rides, river cruises, and tours of the Burgwin-Wright House and other mansions keep folks happy who are into those kinds of things. Others will be content browsing for antiques or nursing a pint at the grungy (in a good way) Barbary Coast, the oldest tavern in town, or at Hell's Kitchen, a market that was re-vamped as a Dawson's Creek set and has since become a hangout for more of those folks who look like stand-ins for Pacey and Joey.