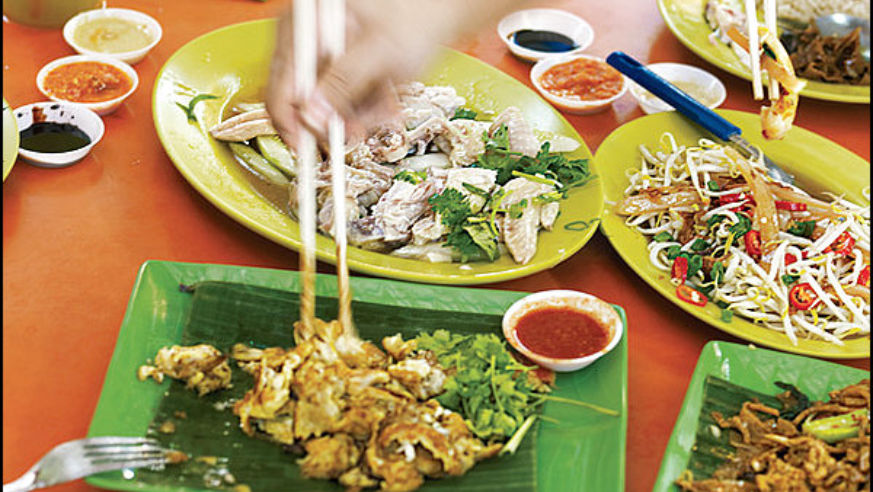 At the Maxwell Food Centre in Singapore's Chinatown, travelers can sample dishes from over 100 vendors

The ultimate cheap eats in 14 cities around the globe.

Anyone who's ever bought fresh steamed crab from a Bangkok canal boat or sampled hot, crisp frites on a Brussels sidewalk knows that not all stellar meals are served in courses—or even come with silverware. In fact, certain cities around the globe have cult followings built entirely around their street-food cultures. Below, a definitive guide to seeking out the best bites in the world's most bountiful (and greasy-fingered) destinations.

1. Portland, Ore.
With more than 400 carts selling everything from Korean tacos to Carolina-style barbecue, Portland is a microcosm of mobile meals. Lunchtime crowds gather near SW 10th Avenue and SW Alder Street; later on, night owls head across the river to SE 12th Avenue and SE Hawthorne Boulevard for deep-fried cherry pies and savory crepes, served until 2 a.m.

Street Smarts: Look for the long lines. Certain vendors are more popular than others for a reason, and a few extra minutes of waiting will almost always be worth it.

4. Philadelphia
The nation's first capital is also home to some of its oldest and most beloved portable fare: soft pretzels, Italian ices, and, of course, cheesesteaks, now being reimagined in Vietnamese and Mexican versions. Locals get theirs at the century-old, seven-block-long Philadelphia's 9th Street Italian Market, open daily (italianmarketphilly.org).

Street Smarts: When local water quality is in question, opt for hot drinks, and watch the preparation closely (did that tea boil for a full five minutes?).

5. Puerto Rico
The food stands along Piñones Road about 30 miles east of San Juan make some of the island's best frituras, or fried snacks: coconut arepas, piononos (plantains stuffed with beef), and bacalaítos, a mixture of pancake dough and salted cod. If you hit the strip around sunset, you might even catch an impromptu salsa-thon.

6. Rio de Janeiro
Health-conscious Cariocas, as locals are known, hit up Ipanema's Sunday market in Praça General Osório square, open from 8 a.m. to 6 p.m., for grilled-shrimp skewers and the occasional dessert splurge: churros stuffed with dulce de leche. The less guilt-inducing alternative: a fresh coconut drink or an açaí shake from one of the stands along Copacabana Beach.

7. Marrakech
In the city's rambling medina, grilled-meat hawkers will cook to order any cut you bring from one of the many nearby butchers. In the evening, head to the night market at Jemaa el-Fna and settle in at the communal tables for chickpea stew, boiled snails, and strong mint tea poured the traditional way: from a pot held perilously high above the glass.

8. Brussels
Art nouveau architecture, the European Union headquarters: Who cares? Brussels is all about the frites (which, we assume, account for the bulk of the nearly 250 pounds of potatoes a typical Belgian consumes annually). At the city's standard-bearer, the Maison Antoine kiosk in Place Jourdan, the secret to success is in the sauces: pineapple ketchup, beer-flavored carbonnade, and mayonnaise so it's almost a dish unto itself.

9. Vienna
Stroll the city center and you'll encounter numerous Imbisses, stands selling sausages and sliced Leberkäse (a baked loaf of ground beef and pork) topped with mustard and folded into Semmel rolls. And to try the local caffeine fix of choice, head to the cafés of the 18th-century riverside Naschmarkt for a Wiener Melange, an espresso drink with steamed milk and whipped cream.

10. Istanbul
Happily for all the travelers who make their base in the Sultanahmet district (home to the Hagia Sophia), the stalls beside the nearby Grand Bazaar can compete with any in this food-rich city. Have your pick of mussel skewers in garlic sauce, grilled corn, roasted chestnuts, and permutations of kebab too plentiful to count. (Feeling adventurous? Try the kokoreç, chopped lamb intestines seasoned with hot pepper and oregano.)

Street Smarts: Bring your own plates and utensils. Illness is often spread through improper washing; this is one way to cut the risk. If you see locals doing the same, consider it a must.

11. Tel Aviv
Mouthwatering falafel abounds throughout the Middle East, but this waterfront city is also home to a unique treasure: the Iraqi Jewish specialty of sabich, a pita sandwich stuffed with fried eggplant, chopped hard-boiled egg, and pickled cabbage and beets. To get right to the source, head to the stands of neighboring Ramat Gan, where the dish was invented.

12. Bangkok
For centuries, Thai food sellers operated out of boats along the canals that formed the city's main transportation system. In recent years, roadside cafés have all but supplanted the custom, but at Taling Chan floating market on the western edge of the city, vendors still grill fish and steam crabs directly on their boats every weekend from 9 a.m. to 4 p.m.

Street Smarts: Fruits and vegetables with edible skins are only as safe as the water they've been washed in, so stick to the ones that you can peel yourself (like bananas).

13. Hanoi
The narrow alleyways of the city's Old Quarter yield a treasure trove of breakfast delicacies for the jet-lagged traveler. Street vendors set up as early as 5:30 a.m. to prepare sweet green rice wrapped in banana leaves, sesame- and coconut-filled dumplings in ginger syrup, and rich coffee poured over sweetened condensed milk (but watch the ice).

14. Singapore
In its many hawker centres (or food courts), such as Chinatown's Maxwell Food Centre, Singapore delivers a civilized street-food experience—complete with table service. Patrons can usually ditch their belongings at one of the marked tables, browse the offerings (ranging from Chinese fish ball soup to spicy Malaysian pork-rib prawn noodles), and give their table number at the counter.