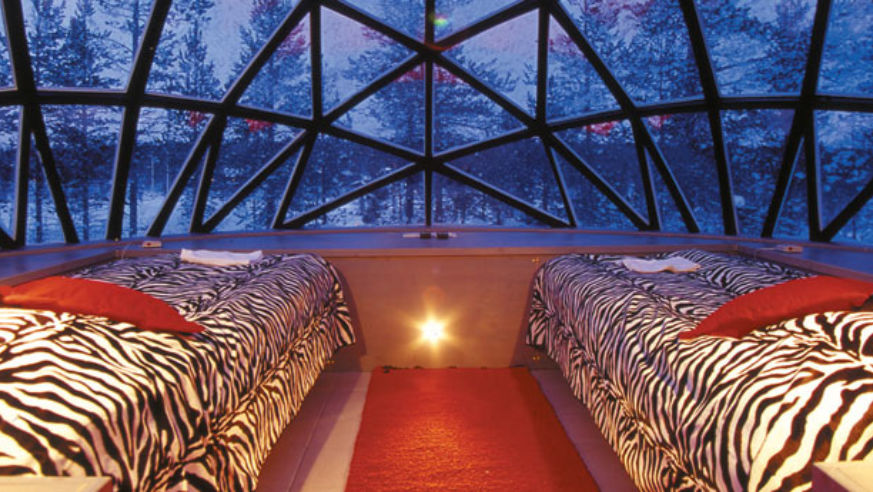 Courtesy Hotel Kakslauttanen
Hotel Kakslauttanen, Finland: The futuristic glass igloos guarantee unrestricted views of the aurora borealis from the comfort of your zebra-striped bed; the phenomenon turns the night sky dazzling shades of green, red, and blue from late August to April.

Is a traditional hotel room with four walls too&hellip;square? For the third year running, here are our picks for the world's weirdest hotels. Book a room to sleep in a beer can, live like a hamster, or get chauffeured by an elephant.

Ever wonder what life is like for a hamster? If so, you're not alone—ever since it opened in 2009, La Villa Hamster has been booked almost every night. The owners, a local businessman and an interior designer, spared no expense when it came to the details of their property, an unusual addition to the town of Nantes in western France. Wrought iron has been affixed to the walls to suggest a cage, and, if they so choose, guests can drink water out of a tube attached to the side of the wall. Naturally, there's a large, fully functioning hamster wheel (consider it the hotel's gym) located on one side of the cage, ahem, room. 011-33/6-64-20-31-09, uncoinchezsoi.net, doubles from $136.
• Photos ofLa Villa Hamster 1 of 2

Beer lovers of the world unite at Lake Skanderborg for a full-immersion experience: drinking by day and sleeping in a giant beer can by night. No, we weren't imbibing the sudsy stuff when we found this one. The collection of 121 aluminum Royal Unibrew beer cans is known as Can Sleep, and it's only open one month out of the year during the Skanderborg Music Festival every August. The cans are clustered in sections of six (six pack, get it?), and each has a loft and is 12 feet high with a "lid" that cracks open. The loft is the sleeping area, and the Ikea furniture-bedecked bottom floor is a living-room-type space, complete with a minibar that's restocked each day with Royal Unibrew products. 011-45/8793-4444, smukfest.dk, doubles from $336.
• Photo of Can Sleep 1 of 1

If you're one of those people who believe you can never have too much salt, then we've got the place for you. The luxurious Salt Palace, located on Bolivia's vast salt flats, is made entirely out of the mineral. From floor to ceiling, including the walls, beds, and chairs, it's all salt, all of the time. And the 16-room property offers dishes like salt-encrusted lamb, of course. Sufferers of high blood pressure should probably look elsewhere for a room. 011-591/2- 62-2951, palaciodesal.com.bo, doubles from $135.
• Photos of Palacio de Sal 1 of 3

A whole new approach to tree houses has taken shape in an old-growth forest on Vancouver Island. Set on five acres, Free Spirit Spheres consists of three pods (made of cedar, spruce, or fiberglass, respectively) that are suspended 10 to 15 feet in the air and accessed by staircases that wind around the trees. The heated interiors are surprisingly comfy—and are even equipped with an iPod docking station. The pods sway gently, so those prone to motion sickness should take note. But look at it this way: At least a bear or other wild beast won't be able to get you. 250/757-9445, freespiritspheres.com, doubles from $135.
• Photos of Free Spirit Spheres 1 of 2

What's so weird about this pint-size property in Sweden? At first glance, the one-room hotel appears to be a cheery red house in the middle of the lake—yes, it's in the middle of a body of water but how strange is that, really? Don't be fooled: The room isn't actually in the house; it's 10 feet underwater. It's also the only functioning underwater hotel that started out as an art installation. Designed by artist Mikael Genberg, the 10-year-old inn's sole room consists of two twin beds with panoramic windows on all sides. There is no electricity, but there is lighting and a portable gas heater. When ready to come up for air, guests can relax on the deck or take the dinghy out to one of the nearby uninhabited islands. 011-46/21-39-0100, vasterasmalarstaden.se, from $328 for two people, open April–Oct.
• Photos of Hotel Utter Inn 1 of 2

It's hard enough to pronounce "Kakslauttanen" sober, so don't even think about attempting it after a shot of Finlandia vodka (we do, however, recommend a few glasses of the stuff to keep warm while staying at this Finnish resort near the North Pole). The snow igloos here are cool (pun intended), but what really caught our eye were the futuristic glass igloos, which guarantee unrestricted views of the aurora borealis from the comfort of your zebra-striped bed; the phenomenon turns the night sky dazzling shades of green, red, and blue from late August to April. (The special thermal glass doesn't frost over—even if outdoor temperatures drop to minus 30 degrees Celsius.) Staff supply wool socks and down sleeping bags for guests who opt for one of the 12 "real" igloos, where the interior temperature hovers between 21 and 27 degrees Fahrenheit. If you get cold feet, the property also features more conventional accommodations like wood cabins. 011-358/1666-7100, kakslauttanen.fi, glass igloos from $468 for two people.
• Photos of Hotel Kakslauttanen 1 of 2

For most jet-setters, getting on a big jet plane and going nowhere might seem like a prank of transatlantic proportions. Then again, most people have never boarded Jumbo Stay at Stockholm's Arlanda Airport. The 450 seats on this retired Boeing 747 have been replaced by 27 rooms, all of which, we assure you, have plenty of legroom. To fly really high, book the cockpit-located suite, where you can move the controls and push as many buttons as you'd like without ever worrying about crashing. 011-46/8-593-604-00, jumbostay.com, doubles from $149.
• Photos of Jumbo Stay 1of 2

Gypsy (Roma) circus performers once traveled through the French countryside in the three restored caravans that now welcome guests at Les Roulottes de la Serve. It's run by Pascal and Pascaline Patin, who bought this lush plot of land for their horses more than 20 years ago. They outfitted the caravans (roulottes) with eclectic bohemian and Indian touches: lanterns, garlands, woven carpets, framed images of deities, and plush armchairs. Guests share bathrooms, a kitchen, and a campfire—a communal setup that's gypsy-like indeed. 011-33/04-74-04-76-40, lesroulottes.com, doubles from $87, open early Apr.–late Oct.
• Photos of Les Roulottes de la Serve 1 of 2

The Wigwam Motel—located on Route 66—feels less like a place one might commune with Native Americans and more like a quirky stopover on a 1950s road trip. But whatever authenticity this hotel lacks, it makes up for in serious kitsch, starting with the tepees themselves. The western-themed interiors are simple: Each wigwam is outfitted with a wagon-wheel headboard as well as air-conditioning, a 25-inch TV, free Wi-Fi, and an in-tepee bathroom. There's also a kidney-shaped pool, a barbecue pit, and a gift shop stocked with Americana. 909/875-3005, wigwammotel.com, doubles from $66.
• Photo of Wigwam Motel 1 of 1

The first confirmation that you're not at just any old luxury resort comes when pachyderm "chauffeurs" show up to transport you to your room at the Elephant Safari Park Hotel Lodge. The 26-room property is adjacent to an 8.5-acre sanctuary for the largest herd of rescued Sumatran elephants in the world. The rooms feature elephant art—literally painted by the park's pachyderms—and elephant-inspired decor and artifacts. Guests can hang out in the on-site baby nursery and catch the 29 resident Sumatran elephants performing in four shows per day. They roam the property, and you can admire them while you're lounging in the pool or dining in the restaurant. 011-62/36-172-1480, elephantsafariparklodge.com, doubles from $260.
• Photos of Elephant Safari Park Hotel Lodge 1 of 2

• For more travel inspiration, deals, and news, sign up for our E-mail newsletter