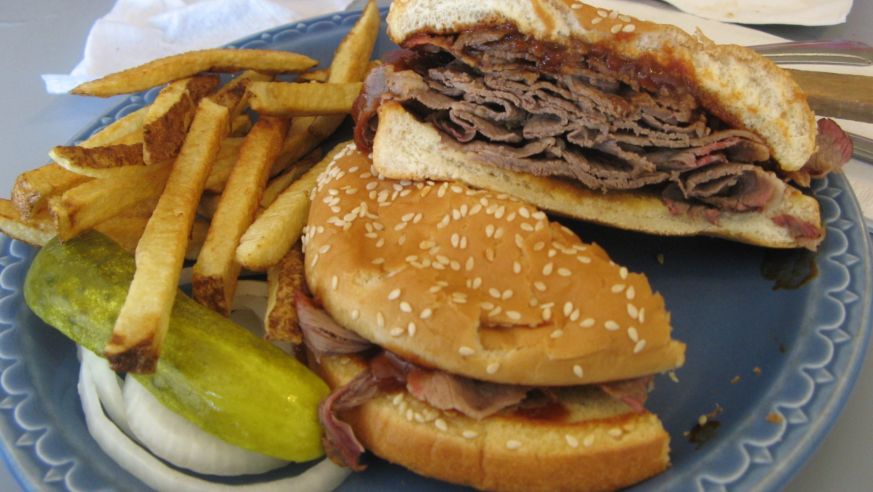 Piles of meat and platefuls of fries are just two of the culprits when it comes to the unhealthiest restaurant meals in America.

You will not BELIEVE the unhealthy dishes that "won" this year's Xtreme Eating awards. Add these to your list of "avoid" or "split" the next time you stop at one of these popular chain restaurants to refuel. PLUS: We share healthy menu alternatives available at the very same restaurants.

We'd never tell you not to indulge on vacation. And we're not food snobs. We enjoy an In-N-Out burger (animal style) when visiting Cali; a perfectly spiced Nathan's dog with mustard, ketchup, and NYC-style onion relish on the boardwalk in Coney Island; and a pulled-pork sandwich piled high with coleslaw when we're in North Carolina. But we do draw the line at meals that are so outrageously unhealthy that they deliver a day's worth of calories or more in one sitting. That kind of indulging is going to slow you down just when we want you to feel rejuvenated and ready to see the world.

Luckily, our friends at the Center for Science in the Public Interest share our good taste. Each year, their Xtreme Eating awards spotlight the unhealthiest chain-restaurant meals in America. Here, this year's "winners." We suggest that you (a) split one of these dishes among three or more diners, (b) consign half of the meal or more to a doggie bag before you tuck in, or (c) avoid them altogether. But each of the chain restaurants mentioned here offer healthier menu alternatives with fewer calories, less fat and salt, and plenty of flavor. We've included some healthy suggestions that are just as tasty as the Paul Bunyan-size dishes you're about to read about.

This admittedly delicious breakfast packs 1,990 calories thanks to a full sausage and cheese omelette topped with chili sauce and sour cream and the three pancakes served right alongside. And don't forget the 42 grams of saturated fat, 4,840 mg of sodium, and 1,035 mg of cholesterol (that's enough for at least two days).

Yum! A 16 oz prime rib with a baked potato, blue cheese wedge salad, and some bread and butter. Sounds good, no? But... you just consumed 2,400 calories, 71 grams of saturated fat (enough for more than three days), and 3,560 mg of sodium (enough for two days).

Laissez les bon temps rouler! This New Orleans-inspired chicken dish actually sounds reasonable: Chicken over pasta with mushrooms, peppers, and onions. But The Cheesecake Factory serves you 1.5 pounds of it, topped with a butter-and-cream sauce for a grand total of 2,370 calories, 80 grams of saturated fat (four day's worth!), and 2,370 mg of sodium.

The Cheesecake Factory healthy alternative:The Skinnylicious Menu (no, we don't care for the name either, but it does make its point) offers lighter fare such as Grilled Salmon and Grilled Chicken.

For those who espouse the "Life is uncertain, eat dessert first" philosophy, this is one dessert that in theory should fill you up for an entire day: A 32 oz cup of vanilla ice cream mixed with pineapple, salted caramel, and pie-crust pieces topped with whipped cream clocks in at 2,020 calories, 61 grams of saturated fat.

SONIC healthy alternative:A small Coke or Barq’s Root Beer Float is under 400 calories and a Strawberry Ice Cream Sundae is under 500 calories.

RED LOBSTER CREATE YOUR OWN COMBINATION

Okay, so theoretically you could come up with a "Create Your Own Combination" that isn't a belly buster, but for the sake of science the Xtreme Eating folks chowed down on a combo of shrimp dishes (Parrot Isle Jumbo Coconut, Walt's Favorite, and Linguine Alfredo), fries, Caesar salad, and a Cheddar Bay Biscuirt for a total of 2,710 calories, 37 grams of saturated fat (enough for two days), and 6,530 mg of sodium (four day's worth). Just for fun, they also indulged in a 24 oz Lobsterita cocktail for another 890 calories.

As with other choose-your-own-adventure menus, you have an opportunity here not to shoot the moon, but for research purposes the Xtreme Eating testers tackled Baked Ziti & Sausage Pasta and a Chicago Classic Deep Dish Pizza for a total of 2,190 calories, 49 grams of saturated fat (more than two days' worth), and 5,420 mg of sodium (more than three days' worth).

Um, kudos (?) to The Cheesecake Factory for landing two menu items on the Xtreme Eating list. This "teachable moment" surprised us: Ordering the Warm Apple Crisp instead of a slice of Original Cheesecake turns out to be the less healthy choice, with 1,740 calories (more than any cheesecake on the restaurant's menu) and 48 grams of saturated fat.

The Cheesecake Factory healthy alternative: Original Cheesecake (still indulgent, but half the calories of the Warm Apple Crisp).

No hidden calories here: This baby proclaims its meaty overabundance right on the menu, with seven (no, that is not a typo, seven) beef patties between the buns. With a side of fries and a Chocolate Fudge Brownie Milkshake, you pack on 2,530 calories, 68 grams of saturated fat, and 5,050 mg of sodium (enough for more than three days). Even if you leave out the shake, the burger and fries still clock in at 1,570 calories.