A few of our favorite links from around the 'net this week.

School's out for summer: the Obamas will spend their August vacation on Martha's Vineyard. [Gadling]

How to keep your e-mail safe while traveling. [AP via Yahoo! News]

Air Tahiti Nui's flight attendants are ready for the runway with uniforms designed by Balenciaga. [The Faster Times]

Austin: The Superest Super 8 of them all? [HotelChatter] 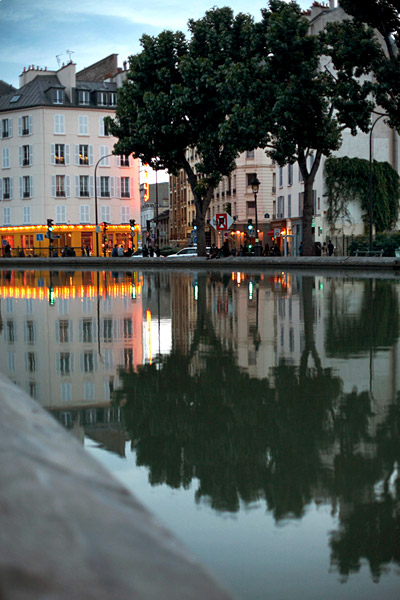 A few steps from the Canal Saint-Martin, the handsome hundred year-old bakery Du Pain et des Id&eacute;es has been revived by the passion of Christophe Vasseur. A late-blooming baker, Vasseur hung up his corporate suit at age 30 and dedicated himself to becoming the best in the city. His wish came true&mdash;after only six years in business, Vasseur was recognized by the gourmet magazine Gault &amp; Millaut as the city's best baker "Meilleur Boulanger de Paris." The menu Vasseur insists on time-consuming methods and fresh ingredients. His chausson &agrave; la pomme fra&icirc;che is simply bursting with juicy apples and unlike any turnover you've ever had. Pair it with a pain chocolat banane, and grab a sack of niflettes (puff pastry tartlets filled with pastry cream, photo here) for the road. These little pastry squares are dotted with orange scented cream and perfect for nibbling along the banks of the nearby Canal Saint-Martin. For something savory, try one of the mini-pav&eacute;s&mdash;small breads stuffed with combinations like spinach-ch&egrave;vre or tomato-feta. His wildly popular pain des amis (friendship bread) makes me want to move to the neighborhood. Light but chewy, with a nutty fragrance and deliciously charred bottom&mdash;it's one of the best I've ever tried. The bill Most pastries, like the chausson and the pain chocolat cost around &euro;1.80 ($2.50). A sack of ten niflettes is &euro;3.30 ($4.60). A 250 gram hunk of the outstanding pain des amis is &euro;2 ($2.80). The mini-pav&eacute;s are only &euro;1.30 ($1.80)&mdash;grab two of these plus a pastry and you've got a sweet little lunch for under &euro;5. The buzz Who doesn't love this place? Pastry chef and author David Lebovitz has raved about the whole grain loaf. French magazine L'Express wrote that Vasseur makes "one of the best chaussons in the city." And three-star chef Alain Passard told the (London) Times last year that the pain des amis is "the best he had ever eaten." TimeOut Paris named it as a "Critic's Choice" and cooed about the artisanal croissants. The coordinates 34 rue Yves Toudic, 10th arrondissement, 011-33/1-42-40-44-52. M&eacute;tros Jacques Bonsergent, R&eacute;publique. Closed Saturday and Sunday, dupainetdesidees.com.

As you walk through the new Hermitage Amsterdam, you may feel a bit underdressed for the occasion. Luckily nobody will be staring at you because the elaborate ceremonial court dresses and uniforms that engulf the room are all worn by mannequins. It's part of the opening exhibition "At the Russian Court: Palace and Protocol in the 19th-Century." The current exhibit shows off extravagant artifacts from the lives of six tsars, from Paul I to Nicholas II. A few noteworthy items to check out: the famous Romanov throne, jewelry pieces by Faberg&eacute;, and the last tsarina's grand piano. Open since June 20, the Hermitage Amsterdam has become the hottest attraction in the capital of the Netherlands. About 100,000 visitors have passed through it already. [CORRECTION: Due to an editing error, the original version had the incorrect opening date. We regret the mistake.] The museum has a deal with the Russian government to produce exhibitions together with the State Hermitage Museum in St. Petersburg, though it is not owned by Russia. It currently holds more than 1,800 objects on loan from Russia. It's housed in the Amstelhof building, which had previously been an elderly care facility for 324 years. The museum gives visitors a glimpse of St. Petersburg and the surrounding countryside via paintings, watercolors, drawings, photographs, and films. One of the highlights is an astonishing 15-foot-long panorama of the city as seen from the Peter and Paul Fortress on the North bank of the River Neva. During the current exhibition, you'll find mannequins dressed in magnificent uniforms and elegant dresses. Remarkably, even the colors of the dresses were governed by a strict protocol set by the tsar Nicholas I himself, a museum representative told Budget Travel. Also check out the clever re-creation of a nineteenth-century ball, which includes revolving round display cases with music and projection images from the film "Russian Ark," shot in the Hermitage St. Petersburg. The exhibit lasts until January 31, 2010. A tip: Weekdays are better for visiting to beat the crowds. Another tip: If you're more keen to see masterworks, it might be worth waiting to poke around the museum after March 6, 2010, when the "Origins of Modern Art. Braque, Matisse and Picasso" exhibit debuts. &mdash;David Cumming Amstel 51, Amsterdam, open daily from 10 a.m. to 5 pm, Wednesdays to 8 pm and closed on January 1 and December 25, 011-31-20 530 87 51, hermitage.nl, admission is &euro;15 for adults. Anyone under 16 years of age gets in free. Word to the wise: Admission is free if you have the I amsterdam Card, which also gets you free public transportation, admission to dozens of other museums and offers discounts on restaurants. MORE ABOUT THE EXHIBIT ON THE WEB Jaunted, Gadling, and intheknowtraveler. REAL DEALS Holland &amp; Belgium Cruise, 9 Nights, From $1,322 Per Person

This weekend: A stitch in time in Lincoln, Nebr.

Quilts were once left to gather cobwebs on guest beds in people's houses. But today they're increasingly the star attractions at many museums, vying for the spotlight with other objects. Quiltmaking is being recognized, at last, as an art in its own right. Today's shows, exhibits, and festivals that celebrate the best quiltmakers are part of a broader trend. The number of quilt-makers in the U.S. has doubled in the past decade, reports the Wall Street Journal. The reason? New tools make quilt-making easier than ever. With 3,000 quilts (forming the largest publicly held collection in the world), the International Quilt Study Center &amp; Museum in Lincoln, Nebr., has exhibits and educational workshops yearround. One such exhibit, "A Fairyland of Fabrics: The Victorian Crazy Quilt" is debuting this Friday. The special collection features 19 one-of-a-kind quilts from the Victorian era, the late 1800s and early 1900s. Lovingly called "Crazies," the quilts were made using irregular shapes and patterns with all sorts of different materials and textiles&mdash;things as varied as cigar ribbons, silk taffeta, and even shells. The resulting look is random, a clever deceit, as each quilt actually has a intricate design. In their time, the quilts were seen as the epitome of sophistication. In addition to the new exhibit, which runs through October 25, the museum also has a display of quilts from 1870 to 1940, or the "modern age." Quilts, like other art, often reflect the sentiments of the time, and the ones in this exhibit display blocky, rigid patterns and characteristics of the colonial style. The museum also hosts free guided tours on Wednesdays and Saturdays at 11 a.m., including this Saturday. 33rd and Holdrege streets, Lincoln, Neb. Admission is $5; parking is free. Call 402/472-6549 or visit quiltstudy.org for more information.