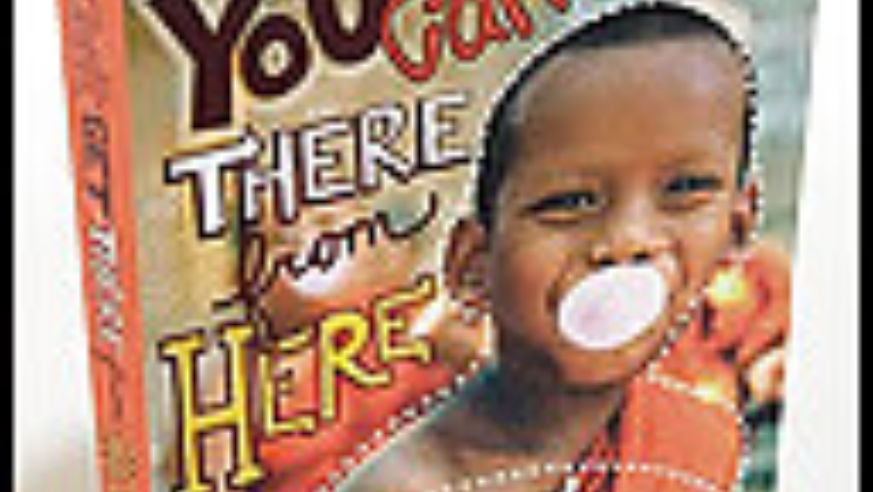 During one stop on a yearlong trip around the world, author Gayle Forman braved a steep mountain in Kazakhstan to search for hobbits. Read an excerpt.

Hobbits on the Silk Road

Hobbits are an unobtrusive but very ancient people, more numerous formerly than they are today, for they love peace and quiet and a good-tilled earth. . . . Even in ancient days they were, as a rule, shy of "the Big Folk," as they call us, and now they avoid us with dismay and are becoming hard to find.

Tell me about it. I had been in Almaty, a cosmopolitan city in the Central Asian country of Kazakhstan for five days, a stop on the yearlong trip I was taking with my husband, Nick. I was on a mission to find the mythical subculture of Tolkienists--Kazak kids who were so taken with the writer J. R. R. Tolkien's characters from Lord of the Rings that they frequently dressed as hobbits, wizards, dwarves, and other Gandalfian creatures, parading in full regalia through Almaty's tree-lined streets. I had prowled Zhibek Zholy and Tole Bi, the main pedestrian drags downtown, where I'd seen plenty of long-haired metal kids hanging out and drinking beer. I'd also seen a fair number of ashen-faced babushkas, begging bowls before them, beseeching a spare few coins. (Poverty is one of the unfortunate by-products of the demise of the Soviet Union; when state socialism collapsed, so did these grandmothers' pensions.) I had shopped among the nouveau riche as they spent their fresh-from-the-oil-fields cash on the latest electronic gadgets and imported French clothes at the bastion of emerging capitalism, the TsUM department store. But so, far I'd spotted no hobbits.

My next stop had been to track down a 21-year-old writer named Erbol who worked for the Institute for War and Peace Reporting, and who had written an article about the Tolkienists that I'd seen on the Web. Erbol spoke no English, but, using an Internet-based translation program and sign language, we'd had a conversation of sorts. He'd told me he knew a guy named Ilya, a punk rocker--this communicated via an outstretched hand run alongside the length of his head to denote a mohawk--who was down with the Tolkien scene and who also spoke good English. I had returned to my hostel armed with Ilya's telephone number and a Russian Language Beginner's Guide, a necessity in a city where few speak English. Under the bemused glances of the three matrons who guarded the front desk, I had practiced saying in broken Russian "Mozhna pagavarit Ilya's telefonem?" a few times before dialing. After three days I had finally gotten ahold of Ilya, who'd turned out to be a tall, lanky blond fellow with a buzz cut and a baritone voice. He'd informed me that he was no longer a Tolkienist but a writer and poet--one who'd recently received an award as Kazakhstan's best young author, it turned out--but he was familiar enough with the movement to be able to track down some hobbits for me.

Which was why that Saturday I had met Ilya at the bus stop at the southern end of downtown Almaty, a few tram stops from my hotel. There, along with dozens of Almaty-ites all dressed up for weekend hiking trips, we'd boarded a packed bus to Butakovka, a wilderness getaway in the foothills of the snowcapped Zailiyski Alatau Mountains. Six miles later, we had alighted at the end of the line and had begun hiking along a cold mountain stream, passing a couple of half-built mansions--part of the upscale urban sprawl spurred by Almaty's new class of oil gazillionaires--before making a turn straight up a steep mountainside. For the better part of an hour I'd trudged up the muddy path as best I could in flip-flops, pausing frequently to breathe deeply and drink water. Ilya had appraised my stumblings with a look of equal parts disgust and pity. At the top of the hill he'd guided us over the ridge and to a grassy clearing he'd kept referring to as the helicopter pad, where he'd promised me my hobbits.

We didn't find any. No hobbits. Or elves. Or dwarves. Or orcs. Not even a human. Ilya shrugged. I sat down to pant. Tolkien was right: These hobbits were a bitch to find.

There were a number of probable causes for the hobbits' elusiveness. It could be, as Tolkien described, the hobbitian temperament, shy of us "big folk." It could also be the Kazak one. More than ten years after the collapse of the USSR, much of Kazakhstan had yet to shake its totalitarian character. Its statues of Lenin and Marx had long been warehoused, but Almaty still felt vaguely Soviet, and not merely because of the city's Stalinist apartment blocks and ubiquitous Lada cars bucking for lane space with flashy new Mercedes. Politically, Kazakhstan, and indeed all of the former Central Asian Republics, which include Kyrgyzstan, Uzbekistan, Tajikistan, and Turkmenistan, have not exactly had great success in democratizing. All of these states are ruled by former Soviet officials who fell into power when the Union collapsed, and these men run their nations with iron fists--more Khrushchev than Kennedy.

Kazakhstan is the most progressive of the 'stans, but even here, journalists critical of the government have been arrested or beaten. Religious and ethnic minorities have also been tightly regulated, purportedly to keep tabs on Islamists, Uighur Muslim separatists, and nascent Christian groups. But because the KGB-era cops don't actually bother with subtle distinctions--say, between Baptists, Scientologists, and Tolkienists--the hobbits, elves, and wizards have found themselves branded as members of an unregistered religion and have suffered a good deal of harassment at the hands of Kazak police. They have had their swords confiscated. They've been beaten. They've even been jailed for staging alfresco jousts on the mall. So the Tolkienists had taken to the hills. But now Ilya and I were in the hills. Where were the Tolkienists?

Ilya was perplexed. "They come here every weekend in warm weather," he told me.

I stared at him, doing my best to replicate the disgust/pity look he'd given me on the trail up. Then I handed him my cell phone. "Why don't you call around?"

Ilya did that and discovered where all the hobbits were hiding: under the covers, nursing hangovers. The night before, one Tolkienist had thrown a wild Friday-the-13th party that had gone on till sunrise. But the hobbits would be back in form the next day, the voice on the phone told Ilya, who gave me a no-problem smile. I gave him a yes-problem frown. I'd have to hike this monster mountain again.

The next day I hiked the mountain again, in proper footwear this time, and met myself a hobbit, a mercenary, several sorceresses, and an army of warriors. It was the first of many meetings. Later on I'd try jousting, learn Elvish, and come to understand just why the Kazak kids were so Tolkien-obsessed.

Reprinted from You Can't Get There From Here: A Year on the Fringes of a Shrinking World, by Gayle Forman. Copyright 2005 by Gayle Forman. Permission granted by Rodale Inc., Emmaus, PA 18098. Available wherever books are sold or directly from the publisher by calling (800) 848-4735.