Zoo babies: Where to get your daily fix

We can't resist devoting a major photo story each spring to baby giraffes, meerkat pups, gorilla twins, and other adorable newcomers at U.S. zoos—and each spring, it gets a bit more ridiculous. In 2008, we published New Kids on the Block and a look back at 2007's babies, Where Are They Now?

Well, it turns out there's an even more shameless publication that devotes itself entirely to the zoo babies beat: Zooborns.com. The blog publishes frequent photo and video updates from around the globe.

Consider the tale of Pingu, an African penguin born at the Living Coasts attraction in Torquay, a town in southeast England. Pingu, who was glum after being separated from its family because a sibling continually hogged all the food, "has found companionship"—with a penguin stuffed animal that staff bought at the gift shop. (Just try looking at these photos of the fast friends without cracking a smile…)

The blog makes it easy to search by zoo or by animal. Pandas brings up news about Lun Lun, a giant panda we've profiled at Zoo Atlanta. When we left off, her daughter Mei Lan, 110 pounds, had just been weaned and was exploring the habitat on her own. Apparently, she matured just in time—Mei Lun has been looking after a baby brother for a few months now.

Check back around May for our own Zoo Babies 2009 installment. 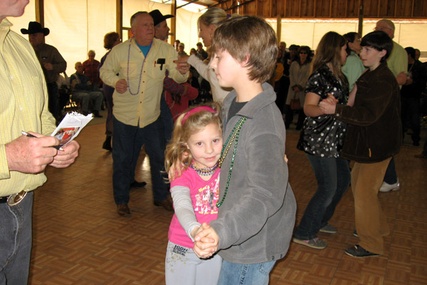 This weekend: Stomp your feet at the Creole Crawfish Festival

The folks at Southaven, Miss., 30 minutes outside of Memphis, have one solution for anyone feeling down about the economy or the still-lingering winter: Try dancing to upbeat zydeco music and then get some gumbo in you. Lots of it. The 4th annual Creole Crawfish Festival kicks off at noon on Sunday. Attendees will be busy&mdash;there's the Zydeco dance instruction and contest, where newbies can learn the steps. And then there's the gumbo cook-off, where participants compete for the People's Choice Award. There will be lots of fresh boiled crawfish to sample&mdash;you can see how to eat these pesky crustaceans in this YouTube video, by the way. Also in attendance is a Louisiana band led by Thomas 'Big Hat' Fields, singing Cajun and French music, and a Latin drum section. Consider making a trip of it&mdash;if you mention the festival, you can get discounted rates at the Holiday Inn. Rates without the discount start at $85 per room per night. Snowden Grove Park, Southaven, Miss. Festivities start at noon and go until 6 p.m. Admission is $5 for adults; kids 12 and under free. Call 901/619-5865 for more info. 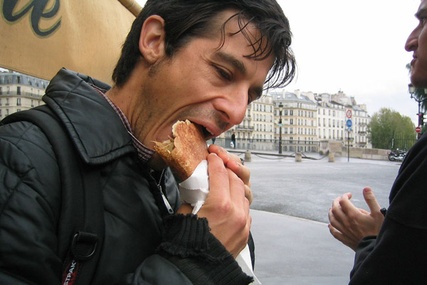 Paris: Crêpes from street to chic

Walk down almost any Paris sidewalk and you're likely to be struck by the sweet smell of cr&ecirc;pes. Every city has its own street foods, and the favored snack in this town is a thin pancake stuffed with melted savories or sugary spreads. Street cr&ecirc;pes are inexpensive, portable, and available at any hour, which makes them perfect for moments when you don't have time or money to spare. Native to the northwestern French region of Brittany, cr&ecirc;peries have proliferated around the country. Parisians flock to them at lunchtime for cheap combo deals like a drink and a galette (a savory cr&ecirc;pe made with buckwheat flour) for &euro;5. Afternoon snackers stop by for their sweet fix: the cr&ecirc;pe au sucre (with sugar) or au citron (with lemon) are favored choices. Kids and Americans (that's me on both counts) go for the chocolate/hazelnut mess that is Nutella. I still remember my first encounter with a street cr&ecirc;pe in Paris. After hours of flea market foraging at the March&eacute; aux Puces, I headed to a vendor on the street. In the wintry outdoor air, that first cr&ecirc;pe arrived hot and oozing with salty cheese. I cupped my cold fingers around the steaming mass and nibbled it like a rare treasure, not realizing at the time that the delicious bundle was probably the worst cr&ecirc;pe I'd ever eat. Even when they're soggy and filled with inferior ingredients, a bad street cr&ecirc;pe is still pretty good. But a great cr&ecirc;pe, as I've learned through years of extensively caloric research, can change your life. When I'm looking for a transformative pancake (and I often am), I head to the Cr&ecirc;perie Josselin (67 rue du Montparnasse, 14th arrondissement, 011-33/ 1-43-20-93-50). This sit-down restaurant is a dark and wood-filled, with lacy curtains and tiled walls. Your first sight upon entering will be an enormous slab of real Breton butter. The cook uses it on his griddle, giving the cr&ecirc;pes a golden color and a crisp, lacy edge. My regular lunch order (approaching fifty visits), is the compl&egrave;te: a galette that's stuffed with ham, egg and melted cheese. This glorifed egg McMuffin comes with a bowl of Breton cider and a dessert cr&ecirc;pe for only &euro;10. Because it's served steaming on your table within minutes, it also qualifies as the best haute fast food in Paris. For those who want a more modern take on the cr&ecirc;pe, the Breizh Caf&eacute; (109 rue Vieille du Temple, 3rd arrondissement, 011-33/1-42-72-13-77) is another wildly popular destination. Here, an impressive list of artisanal ciders and shellfish starters complement some very creative cr&ecirc;pe cookery. The ingredients at this Marais hotspot are all organic, and the light-wood interior is a departure from traditional Breton d&eacute;cor. The cr&ecirc;perie's location, just down the street from bars like La Perle (78 rue Vieille du Temple) make the Breizh a great place for a pre-crawl dinner with friends.

Bright Spot in the Big Easy Checking in with New Orleans' Magazine Street. [New York Times] Good times rolling on for Mardi Gras New Orleans doesn't see any downturn from last year. [CNN] Strike a Pose A new exhibit in New York looks at the studied weirdness of fashion photography. [Slate.com] Advertise for the May Fair Hotel on Your Butt To celebrate London's fashion week, the publicity-hungry hotel commissioned jeans with 14-karat gold touches. [HotelChatter] Next upgrade for the A380: Bunk Beds? The Aerobus may have tiny, but cheaper, lay-flat seats. [Gadling] Ryanair to do away with check-in desks. The low-cost carrier continues to cut. [USATODAY] Green Island: Rethinking Tokyo Fanciful photos show a much greener Tokyo. [Treehugger] Hostels hustle to add an upmarket tag&hellip;and see our own list, too. [Boston Globe]

1969 was a monumental year in pop culture for lots of reasons&mdash;Woodstock, peace signs, the moon landing, Janis Joplin. It was also the year John Lennon staged a "bed-in for peace" in Montreal with his new wife, Yoko Ono. The pair stayed in bed for a week in Suite 1742 of the Queen Elizabeth Hotel. They did it to protest the Vietnam War, letting reporters hang out with them. Their stunt was well-documented&mdash;350 radio stations in the U.S. alone picked up the story. To commemorate the event, the Montreal Museum of Fine Arts will host Imagine: The Peace Ballad of John and Yoko beginning Apr. 2. The free event, co-curated by Ono who loaned many of the items on display, includes drawings, videos, and unpublished photographs, along with other mementos from John and Yoko's life together. Montreal was the second bed-in; read about John and Yoko's first in Amsterdam in our recent article on Sexy Hotels. And as you might expect, the Queen Elizabeth has a package offer, so you can stage your own bed-in.